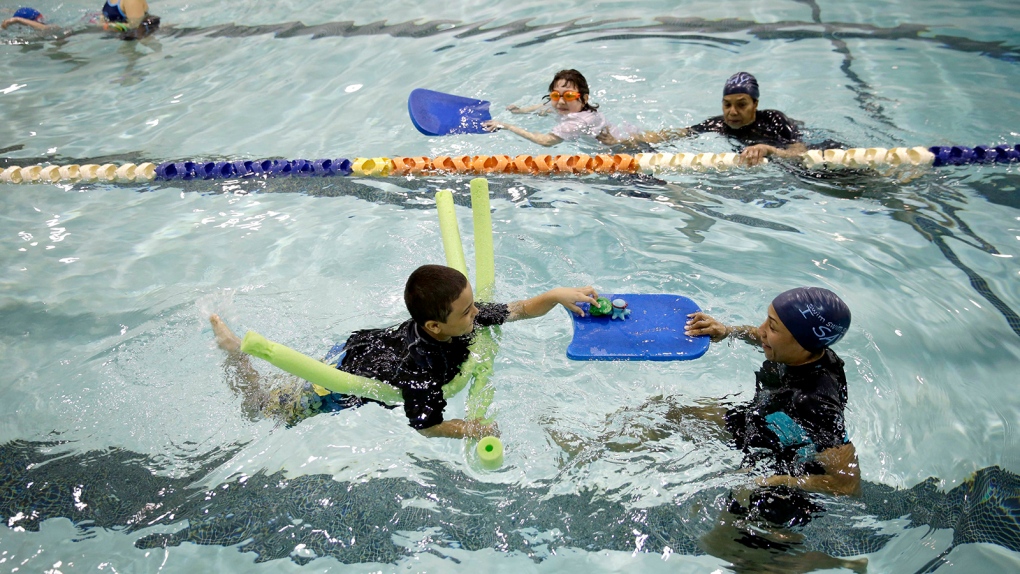 Young swimmers and their teachers swim in a pool during a swim lesson in the Bronx borough of New York, Wednesday, April 15, 2015. They are in swim swim swim I SAY, one of 65 programs around the country to receive grants from the nonprofit Autism Speaks to provide the personal attention and patience if often takes to help children on the autism spectrum learn to swim. (AP / Seth Wenig)

In a new book by autism's most famous spokesperson, Temple Grandin gives credit to her mother for nudging her outside her comfort zone, and she urges today's parents to do the same for their children.

"The Loving Push," co-written with psychologist Debra Moore, makes a convincing case that, more than other children, those on the spectrum need to be prodded to reach their potential.

"It can be tough to move our spectrum kids forward, because the autistic brain is usually very sensitive to change and novelty. Routines, rituals, and sameness are the preferred status quo," the authors write. "Even introducing what to you seems to be a minor change can trigger major resistance or meltdowns. Sometimes it just doesn't seem worth the fight. But we're here to tell you that your child depends on you pushing them."

Children on the autism spectrum may struggle with self-initiation and disorganization, and they may be easily overwhelmed -- a perfect storm of challenges that impedes their ability to challenge themselves and grow.

"Pushing is necessary," the authors write, "because those on the spectrum are unlikely to automatically pick up the mundane but necessary tasks of daily life without us intentionally nudging them and providing them with information, encouragement, and persistence."

The book tackles myriad subjects, albeit fleetingly: the importance of chores, sleep, exercise; the unfortunate loss of vocational classes in schools; the type of therapy best suited for children and teens on the spectrum; advice from the founder of a college transition program for students with autism. The book's organization is free-flowing bordering on confusing, with a section on the benefits of volunteering coming after one dealing with romantic relationships.

Still, the information it contains is often helpful and thought-provoking: Pushing your teen to learn how to drive makes it less likely they'll become a homebound recluse. It's important to role-play potential interactions with police officers so your teen knows how to behave to decrease the risk of being misunderstood. Sharing mistakes and struggles from your own life, and explaining how you overcame them, provides an important model for your child.

Grandin's personal experiences are a particularly welcome feature of the book. Grandin, a professor of animal science, shares that she used to be afraid to go to the store by herself, until one day she was building something and needed a piece of lumber. Her mother used that special interest as leverage, refusing to accompany Grandin to the store. Her mother accurately deduced that Grandin's motivation to finish the project would override her anxiety and reluctance.

"The Loving Push" also includes the voices of other people on the spectrum and their caregivers, a valuable addition that would have benefited from more artful incorporation into the text and tighter editing.

The book's central weaknesses are most apparent in the chapter on gaming. It's hard to dispute that compulsive gaming is bad and that kids on the spectrum are particularly susceptible to becoming addicted. However, it erodes reader confidence to quote experts without giving their affiliations or credentials; to rely on anecdotal evidence instead of more rigorous research; and to suggest that the increased incidence of autism correlates with the introduction of new gaming consoles in the early 2000s (the authors apparently didn't have brothers who played Atari in the '80s).

Quibbles aside, "The Loving Push" is a valuable addition to the bookshelf of an autism parent or professional.