The shocking thigh-boots, which have been molded to resemble a human leg and foot with obvious modifications, was created by Montreal-based designers Hannah Rose Dalton and Steven Raj Bhaskaran.

“The intention behind the shoe is really to question what it means to be human,” Bhaskaran explained during a telephone interview with CTVNews.ca on Tuesday. “We’ve always been fascinated by the human body and experimenting with what that could look like.”

The silicone skin-like shoes were sculpted to resemble every detail of Dalton’s feet and legs to blend in to her body. It took months to perfect the boots, which Bhaskaran explains is the reason for the footwear’s expensive price tag – a whopping $10,000.

The pair met each other while they were attending a fashion program at LaSalle College four years ago. Since then, Bhaskaran said they’ve been inseparable.

“It was the first time that I’ve met somebody who didn’t judge me and I didn’t judge Hannah,” they said. “We bonded over a lot of the aspects we don’t like about fashion, so in terms of the overconsumption, child labour, a lot of really horrifying things that goes on behind the fashion industry.”

Feeling oppressed by the technical aspects of their school program and the lack of creativity, the couple set out on their own to create what they describe as their own “world,” in which they tackle controversial subject matter such as, censorship, consumption, environmental waste, and body modification, to name a few.

That’s how the designers came up with their multidisciplinary brand Fecal Matter, which primarily focuses on fashion and music (they’re both globe-trotting DJs), but also incorporates other elements of photography, visual art, and film.

“Fecal Matter was our solution to a lot of what we felt was gross about fashion and also a way for us to express how we feel about what was happening in the world,” Bhaskaran said. 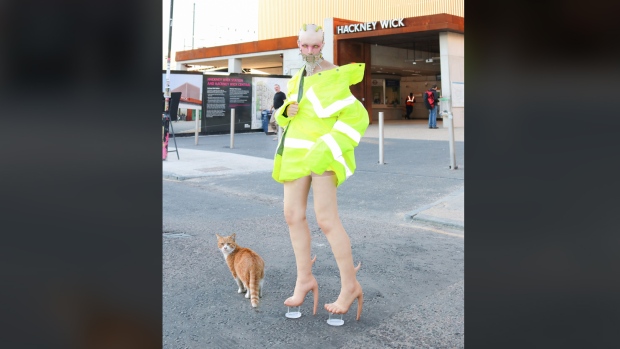 Since they joined forces, the duo has sold unique clothing pieces made from recycled materials on the online app Depop.

The brand has also attracted hundreds of thousands of followers on their Instagram account that features countless images of Dalton and Bhaskaran modelling their creations and showcasing their intense looks.

For example, in one of the photos, Dalton is pictured with completely red eyes, green hair with a bald patch, and a butterfly painted smack dab in the middle of her forehead. The caption?

Bhaskaran said everything they release, including the attention-grabbing skin heels, is designed to evoke feelings from the audience.

“A lot of times what these big brands don’t have is emotion,” they said. “Consumption has sort of become something where people don’t really feel any more so for us it’s important to actually see that people are feeling something, whether good or bad, at least it’s something.”

Last month, Fecal Matter managed to elicit some emotion when they featured the skin heels, modelled by Dalton wearing a beautiful dress made of real flowers, at their first-ever fashion show in London.

Bhaskaran said that although some people have expressed their disgust at the shoes, they’ve already received a number of orders from clients vying to get their feet into a pair.

When asked whether they’d consider designing a more accessible version of the skin heel with a lower price point, Bhaskaran said they’re still mulling it over.

“Right now, I think the beauty of the shoes is that they’re so exclusive,” they said.