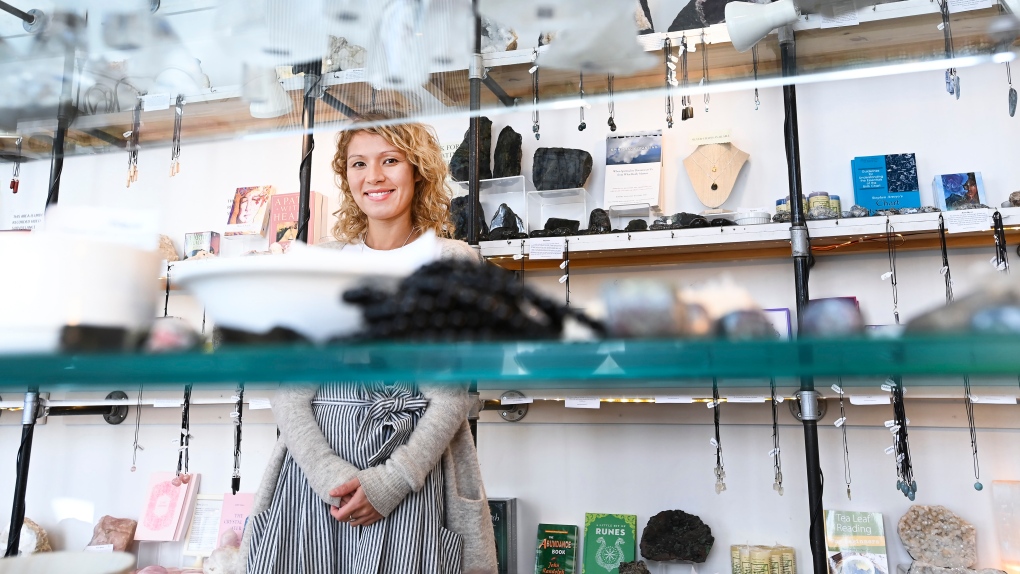 Lady Samantha poses for a photograph at The Rock Store, where she teaches astrology and sell products in Toronto on Friday, September 18, 2020. (THE CANADIAN PRESS / Nathan Denette)

Samantha Chin is busier than usual.

The Toronto-based astrologer has seen a surge in the number of people turning to the planets and stars to find direction in their lives during the global COVID-19 pandemic.

"I normally teach one class a week," says Chin, who also goes by the name Lady Samantha.

"I had to increase that to three classes a week, because there was so much demand for new students. And my personal practice -- I've been booking consistently a month in advance because I'm fully booked."

Chin, who also owns a crystals store, says some items have been consistently sold out. And that's never happened before.

Donna Young, an astrologer in Alberta, says the number of her clients in Canada and the United States has spiked by about 50 per cent during the pandemic, and some astrology courses she teaches online have been sold out for the first time ever.

As the director and Canadian representative for the Organization for Professional Astrology, the 59-year-old says colleagues around the world are also seeing a significant increase in clients.

"I have a colleague in Turkey whose student body went from 100 to 900 during the pandemic."

Many people are out of work and struggling to figure out what to do next, Young says.

And "our lack of emotional resources, our financial insecurity, other quirks ... become apparent if we're alone in contemplation," she adds.

"It's not so much about manoeuvring the pandemic as it is about people wanting to really understand their place in the world."

Young and Chin both say careers and relationships are typically the biggest questions for people, and they still are during the pandemic.

Stephanie Ho, who works in finance in Toronto, decided to enrol in more astrology courses during the pandemic.

She broke up with her boyfriend a year ago and was feeling confused. With more time on her hands during the pandemic, the 35-year-old turned to astrology, which she says has taught her more about herself.

"I'm much more complicated than what my sun sign tells me I am," says Ho. "I've learned a lot about my strengths, my weaknesses, my goals in life, my potential in my career, my personality traits."

Ho says she has also learned a lot about how moments in her childhood have shaped her. And for the first time, she says she has been having open conversations with her friends and family about it.

"Samantha was able to unpack my childhood wounds in seven minutes in one class," she says.

Young says the growing interest in astrology has been prominent among young people looking for direction.

"Because they're not as skeptical as the generations before them. Once upon a time, you would have been hard pressed to find somebody who even wanted to admit that they believed in astrology."

Young, who has been practising astrology for 20 years, says the transit system of planets and stars have shaped her life significantly.

In 2017, astrologers from around the world, including herself, saw that 2020 was going to be a difficult year, she says.

The prediction was one reason why she moved from Calgary to Sylvan Lake, a small community south of Edmonton, where she grows her own vegetables and raises chickens.

She says she didn't want to be dependent on the country's food supply during the pandemic.

Asked to predict when the pandemic will end, Young says it won't be soon.

"We're not out of the woods. We've still got another year, or 18 months, maybe longer," Young says.

"We're not going to recover from this for some time ... you don't need to be an astrologer to figure that out."