Lanvin makes a comeback at designer's debut show in Paris 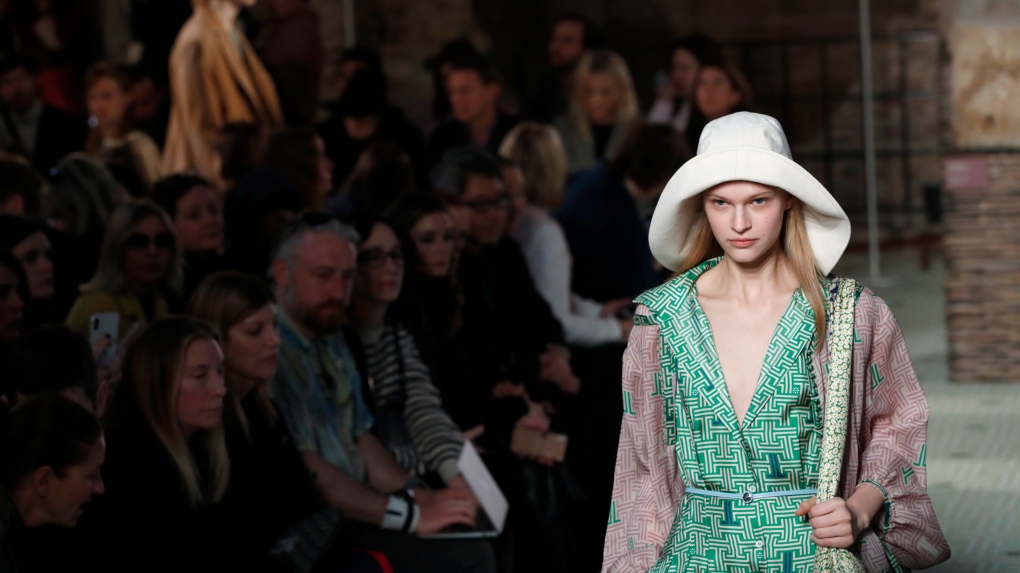 A model wears a creation as part of the Lanvin ready to wear Fall-Winter 2019-2020 collection, that was presented in Paris, Wednesday, Feb. 27, 2019. (AP Photo/Christophe Ena)

PARIS -- After several years in the creative wilderness, Lanvin has made a comeback.

There was a palpable sense of relief -- as well as praise -- as noisy applause erupted at the end of the French couture house's catwalk show Wednesday, a debut from Bruno Sialelli, Lanvin's fourth designer in four years.

Some highlights from the fall and winter ready-to-wear shows at Paris Fashion Week:

The collection was shown inside the haunting stone interiors of Paris' National Museum of the Middle Ages amid statues of largely-faded and forgotten figures from the past.

Lanvin, a French national treasure and the world's oldest continually running couture house, has itself been fading since the departure of lauded couturier Alber Elbaz in 2015 after 14 years at the helm and a string of disappointing designers.

That ended resoundingly Wednesday as Sialelli took the brand in a strong new direction -- falling short of a triumph -- with a playful, arty and accomplished collection of men's and women's designs called "Mystic Pilgrims."

Colours were used with mastery -- in a melting pot of Renaissance hues that spanned from the house's signature blue into what the brand called "powdery shades of avocado, absinthe, banana and bergamot warmed by mahogany, navy, tomato and a blaze of ultraviolet."

Some had raised doubts about Sialelli when he was poached in January from Loewe, given that he was relatively unknown and only 31 years old. Others had taken to social media in recent seasons with the tag .JeSuisLanvin in sadness and solidarity at the great house's perceived demise.

This collection proved them wrong.

The house markets itself as a sort of fashion ideas laboratory with staff that always don white science aprons. The program notes explained: "Galliano employs decadent cutting to reduce familiar garments to their most authentic form... only the memory of what once was."

In the 40-look men's and women's collection, "degeneration" turned out to be a play on deconstruction that revealed the essential form or features of a garment in a way that was not gender specific.

Pockets and the Harris tweed of a grey menswear coat was used as the base material for a women's dress. An office-ready white poplin shirt and knitted tank top were transformed into the undergarments of a layered black organza column dress, worn by a man with hairy legs, pop socks and black rubber Mary Janes.

Elsewhere, a double-breasted coat in black wool was transformed into shorts.

The strong collection spoke for itself with no real need for the marketing.

THE ART OF THE INVITATION

The age of email and rising environmental awareness doesn't seem to have left a mark on the fashion industry's antiquated system of invitations.

Top houses vie for the wackiest or most imaginative idea.

Chloe's "invitation" this season was a small pack of matches with pink ends. Jacquemus proved that less is more with the smallest invitation card in recent memory measuring 3cm by 4cm -- with show information that required a magnifying glass to read.

Saint Laurent chose the decadent option, sending out black leather wallets with the guest's initials embossed discreetly inside in gold.

The age-old Parisian house of Courreges this season took over the Espace Niemeyer -- an iconic dome building with a space-age vibe designed by Brazilian architect Oscar Niemeyer.

It was an apt show location for the house that set 1960s trends for stars like Brigitte Bardot and Catherine Deneuve with space-age silhouettes and futuristic textiles.

Colorful sketches from the 1970s were the starting point for the display. However, it stuck close to the bread-and-butter space-age styles and didn't push the creative envelope.

The Espace Niemeyer is the headquarters of the French Communist Party.

This egalitarian spirit caught on as a theme for Zobel who, the program notes said, aimed to do away with the notion of status in the show through "islands of communal seating."

Unfortunately, the house forgot to erase the Fashion Week notion of guests being seated in order of editorial importance. Like everywhere else, the Courreges guests in Paris were placed in first, second and third rows.