Kush in the kitchen: What to know when cooking with cannabis 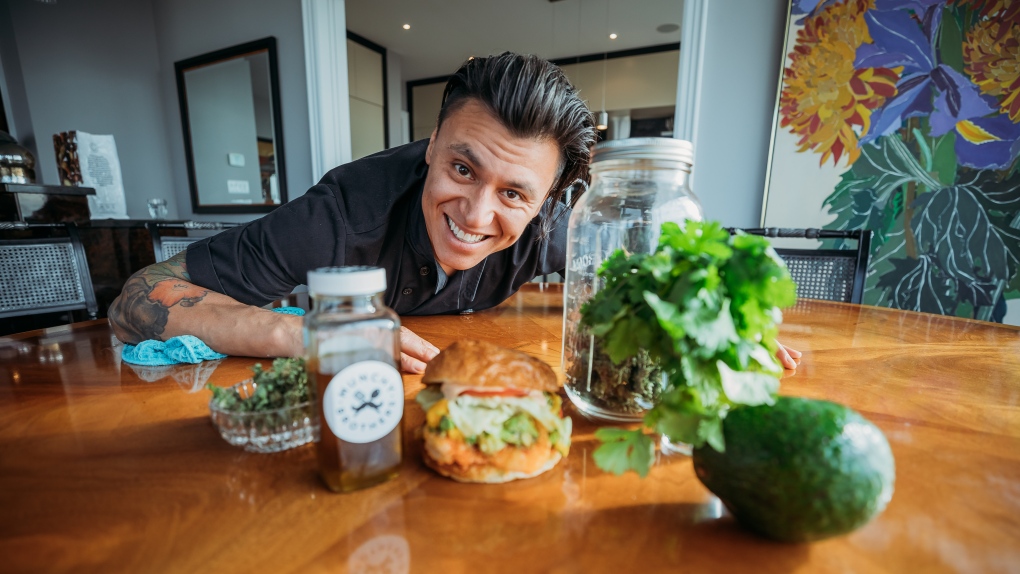 Pat Newton poses in front of his ingredients for a cannabis-infused dish. (sociophilo/Sandro Pehar)

TORONTO -- Pat Newton has been experimenting with cannabis-infused cooking for more than 15 years.

The Toronto-based chef and founder of cannabis company Munchy Brothers has made avocado toast, mojito cocktails, cricket brownies, and an entire Thanksgiving turkey -- all with added buzz. When he feels like a high in the morning, his go-to ‘wake-and-bake’ staple is scrambled eggs made with weed-infused butter, sometimes called “cannabutter.”

Since cannabinoids (the compounds of a cannabis plant) are fat-soluble, butter has long been one of the best ways to integrate cannabis onto your plate.

Cannabis-infused eating and drinking will soon become more accessible than ever as edible products start to hit the shelves across the country after October’s legalization. But many of the proposed products won’t be available for months yet. Newton’s Munchy Brothers creations -- which include infused chocolate chips, salt, sugar and simple syrup for cocktails -- likely won’t be available for purchase until late 2020.

Here’s what you need to know to add some kush to your kitchen on your own.

Using bottled tinctures with a measured dropper takes some of the math out of the equation, but may not be as effective as using dried cannabis flower. The oil will have a greater possibility of evaporating if you add heat to it, which will diminish the potency of the cannabis.

So use bottled cannabis oils for almost anything that doesn’t use much heat, like a salad dressing, suggests Newton, or on top of pizza, in pesto sauce, and in smoothies.

If you’re using dried flower, you need to decarboxylate, or “decarb” the cannabis (this has nothing to do with fewer carbohydrates). This is the process by which you activate the psychoactive qualities, turning the tetrahydrocannabinolic acid, or THCA, into THC, the cannabinoid responsible for the “high” sensation. Decarboxylating happens when you light a joint, or when you heat dried cannabis flowers in the oven.

Heat an oven to 200 to 250 degrees Fahrenheit. Lay a crumpled piece of parchment paper on a pan. The crinkles of the paper will prevent the cannabis from close contact with the hot pan, which could burn the flower, according to Leafly, a cannabis lifestyle site. Break up the flower (or keep it whole, suggests Newton) and spread it out on the parchment paper. Place the pan in the oven and after about 45 minutes, remove and let it cool.

You can store it in a jar for later, or use it in your next dish. Warning: Your kitchen may smell like weed.

OTHER WAYS TO ‘DECARB’

Cannabis flower can be decarboxylated in many different ways, including some that will minimize the smell.

“You could literally break up some bud, heat up olive oil in a pan and that would convert it,” said Newton. But that’s the “express” route, he added, since the cannabis plant is quite delicate.

The oven is the more advanced method. You can decarb on a pan (as above) or you can decarb in a mason jar, which, according to Leafly, will help prevent the pungent aromas. It will also preserve the terpenes, the compounds that give cannabis its flavour profiles.

An even more advanced technique is the sous-vide method, which requires an immersion circulator to slowly heat an airtight bag of cannabis in a water bath. If you’re willing to shell out some cash, you can invest in a “decarbox,” a “decarboxylator” contraption that looks like a smoothie blender or small box.

The most common cooking ingredients to infuse with cannabis are butter and oil. While you can decarboxylate your cannabis within the butter or oil, it will extend the cooking time by several hours. Instead, take “the path of least resistance,” said Newton, and decarb separately before cooking.

For butter recipes, Newton recommends you melt 2 pounds of butter in a pot, stir in 4 grams of decarboxylated cannabis flower and keep it simmering around 180 F for 90 minutes. Use a cooking thermometer to ensure it stays under 250 F. Use a cheese cloth to strain the butter, removing the cannabis flowers. Pour the clarified, cannabis-infused butter into the desired mould (like an ice tray) and store in the refrigerator overnight.

For oil recipes, use a double-boiler method and mix 500 ml of your desired cooking oil and 10 grams of decarboxylated cannabis into an aluminum bowl placed over a pot filled with a few inches of water. Heat so the oil simmers at 160 F for 60 minutes. Use a cooking thermometer to ensure it is under 200 F. Strain the oil through a cheese cloth and pour into desired moulds (like an ice tray) and store in the refrigerator overnight.

A NOTE ON DOSING

Though you may fancy yourself an at-home chemist, cooking with cannabis may require some modesty when it comes to the science of it all.

“Exact dosing is not possible unless you have a lab analyze the infused ingredients,” said Newton.

Always be aware of what the THC percentage is of the cannabis purchased. Here’s a general guide for dosing:

That means 1 g of cannabis has 150 mg of THC to be extracted and infused into the food. So if you make a dozen cookies with butter infused with 1 g of this cannabis, each cookie will have approximately 12.5 mg of THC. But it’s best to account for a 25 per cent loss.

“It’s definitely a sweet science and getting that right is a little trickier than one would imagine,” said Newton.

It’s best to play it safe if you’ve never done it before, he added.

“It’s important to just know that it’s better to dose low than to dose high.”