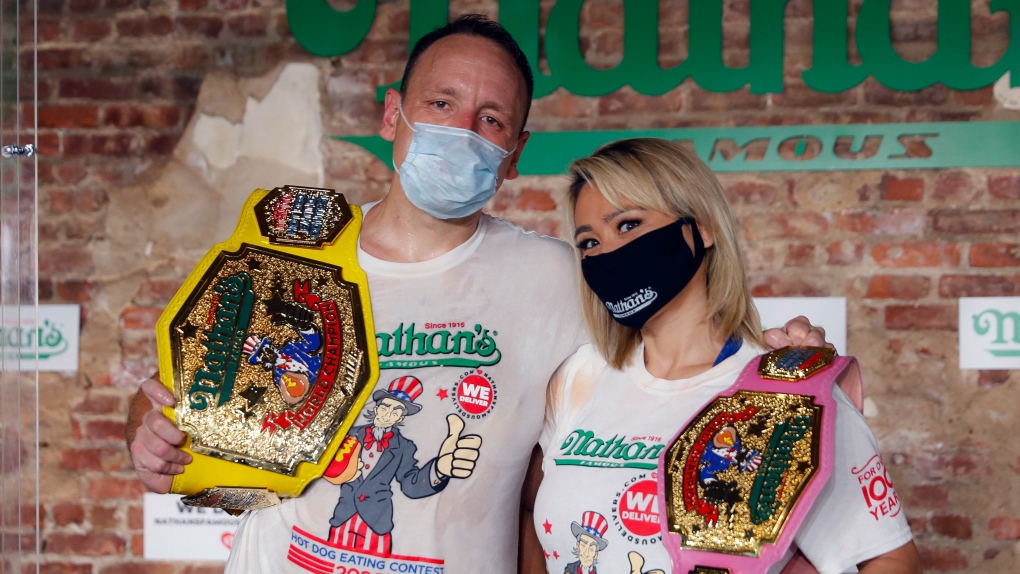 Sports fans are hungrier than ever for competition on TV, and the annual Nathan's Famous Hot Dog Eating Contest served it up Saturday in New York.

Joey Chestnut gobbled down 75 weiners and buns in 10 minutes to win his 13th title. Somewhere around the eight-minute mark, Chestnut made history by eating his 1,000th career dog.

The Coney Island tradition allowed betting this year. The coronavirus crisis forced some changes, too. Spectators weren't allowed to watch in person. Competitors were separated by clear barriers. And the people bringing them fresh supplies wore masks.

"It was hard, but I knew I was fast at the beginning," Chestnut said on ESPN. "The dogs were cooked really well today. At minute 6 is where I missed the crowd. I hit a wall. It took a little more work to get through it."

Miki Sudo ate 48.5 hot dogs to win the women's division and set a world record. It's her seventh title, more than any woman ever.

Oddsmakers had pegged her as the heavy favourite.

About the lack of fans present, she said, "To everybody watching at home, I wish you could be here, but thank you so much for supporting us out of your living room."

She also said it helps that she has a training partner in her boyfriend, bodybuilder Nick Wehry, the No. 8 competitor with Major League Eating. He finished third Saturday with 39.5 dogs.

"I feel great," Sudo said. "I'm sure the physical effects will kick in in a little bit."