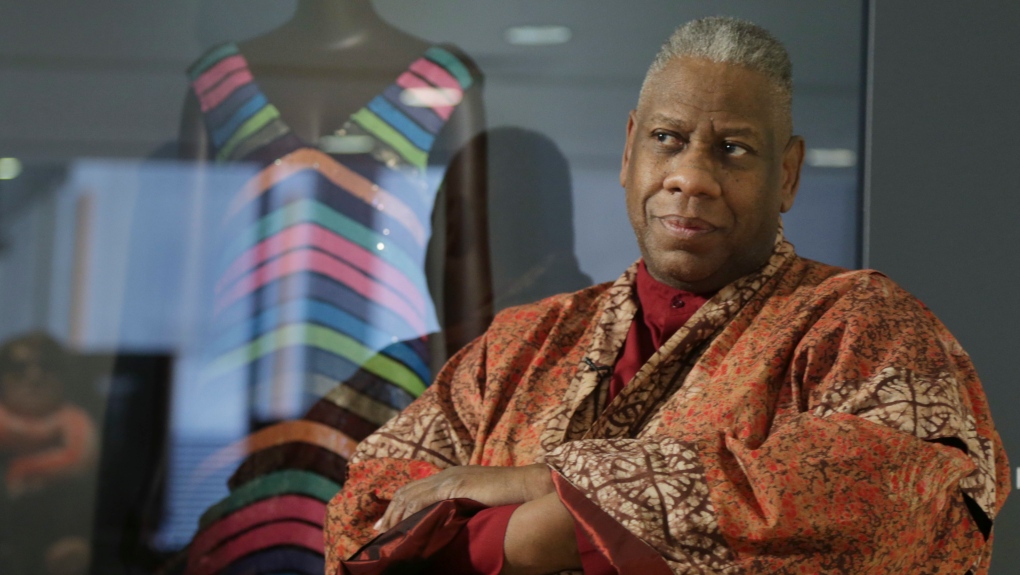 Andre Leon Talley, a former editor at large for Vogue magazine, speaks to a reporter at the opening of the "Black Fashion Designers" exhibit at the Fashion Institute of Technology in New York, Tuesday, Dec. 6, 2016. (AP Photo/Seth Wenig, File)
NEW YORK -

Andre Leon Talley, a towering and highly visible figure of the fashion world who made history as a rare Black editor in an overwhelmingly white industry, has died. He was 73.

The death Tuesday of Talley, the influential former creative director and editor at large of Vogue magazine, was confirmed on his Instagram page early Wednesday. No details were given as to his cause of death, but he was known to have had health struggles in recent years.

Dressed in his signature sweeping capes or colourful caftans, Talley was a regular in the front row of fashion shows in New York and Europe for decades, or atop the famous steps at the Met Gala. At 6-feet-6 inches tall, he cut an imposing and unforgettable figure; a Vogue staffer called him "the pharoah of fabulosity," the magazine wrote in its obituary.

But he was celebrated even more by fashion insiders for his deep knowledge, amassed over decades of devotion to the craft that began in his youth in the Jim Crow-era South, when he would walk to the campus of Duke University, where his grandmother cleaned dorms, to read Vogue.

In a 2013 Vanity Fair spread titled "The Eyeful Tower," Talley was described as "perhaps the industry's most important link to the past." Designer Tom Ford told the magazine Talley was "one of the last great fashion editors who has an incredible sense of fashion history. He can see through everything you do to the original reference, predict what was on your inspiration board."

Talley was also a familiar figure to TV audiences, serving as a judge on "America's Top Model" and appearing on "Sex and the City" and "Empire."

Among the many celebrities offering condolences on Wednesday was his friend Whoopi Goldberg, who said his death came "just in time for the front line at fashion week in Heaven."

Also full of praise was Kerry Washington, who wrote on Instagram: "Oh Andre! Heaven is not ready for you darling!!!!!! The whole afterlife is going to be just too fabulous now ... You will shine so brightly from the heavens that we will know what true stardom looks like."

Designer Diane von Furstenberg paid tribute on Instagram, writing: "No one saw the world in a more glamorous way than you did no one was grander and more soulful than you were."

In his 2003 memoir, "A.L.T.: A Memoir," Talley focused on two of the most important women in his life: his maternal grandmother, Bennie Frances Davis and the late, legendary fashion editor Diana Vreeland.

"Bennie Frances Davis may have looked like a typical, African American domestic worker to many of the people who saw her on an ordinary day, but I, who could see her soul, could also see her secret: that even while she wore a hair net and work clothes to scrub toilets and floors, she wore an invisible diadem," he wrote.

Born in Washington, D.C. and raised in Durham, North Carolina, Talley worked assorted jobs before arriving in New York in the 1970s, soon meeting Vreeland and striking up a friendship that lasted until her death in 1989. After stints with Interview magazine and Women's Wear Daily, he was hired at Vogue in 1983 by Editor in Chief Anna Wintour and was appointed its creative director in 1988.

Late in life he had a public falling out with Wintour, after he released another memoir in 2020, "The Chiffon Trenches," that included behind-the-scenes tales about Wintour and other fashion figures like the late designer Karl Lagerfeld.

"The loss of Andre is felt by so many of us today," Wintour said in Vogue's obituary. "The designers he enthusiastically cheered on every season, and who loved him for it; the generations he inspired to work in the industry, seeing a figure who broke boundaries while never forgetting where he started from; those who knew fashion, and Vogue, simply because of him...

"Yet it's the loss of Andre as my colleague and friend that I think of now," Wintour said, calling it "immeasurable."

Talley told The Associated Press in a 2003 interview about having worked in the late 60s as a park ranger in Washington and in Maryland, where he told visitors about slaves who built Fort Washington and dressed up like a Civil War soldier.

In that interview, he opined that of all types of apparel, he considered shoes to be most important.

"You can tell everything about a person by what he puts on his feet," Talley told the AP. "If it's a man and you can see the reflection of his face on the top of his black shoes, it means they've been polished to perfection. If it's a woman and she's wearing shoes that hurt well, shoes that hurt are very fashionable!"

But, asked what he considered the ultimate luxury item, it was not shoes, but rather "a clean, fabulous bed with white Egyptian cotton sheets."

His was honest about longtime struggles with his weight. Asked whether fashion and food went together, he noted that "Food is not important in the fashion world, where you are supposed to look like an asparagus.

"In my world, it's about butter poundcake, and fried chicken, and potato salad and hot biscuits. It's hard to break away from that for a lettuce sandwich."

200 bodies found in Mariupol as war rages in Ukraine's east

Workers digging through rubble found 200 bodies in Mariupol, Ukrainian authorities said Tuesday, another grim discovery in the ruined port city that has seen some of the worst suffering of the 3-month-old war.

Trudeau faces chants, pounding drums as he walks through crowd at Kamloops memorial

The prime minister made comments following a memorial gathering in Kamloops to mark one year since the Tk'emlups te Secwepemc Nation announced the remains of up to 215 children were detected at a former school site.

Conservative party ends its investigation into complaint about a racist email

The Conservative Party of Canada says its ended its investigation into a racist email sent to leadership contender Patrick Brown's campaign team after the party member purportedly behind it resigned their membership.