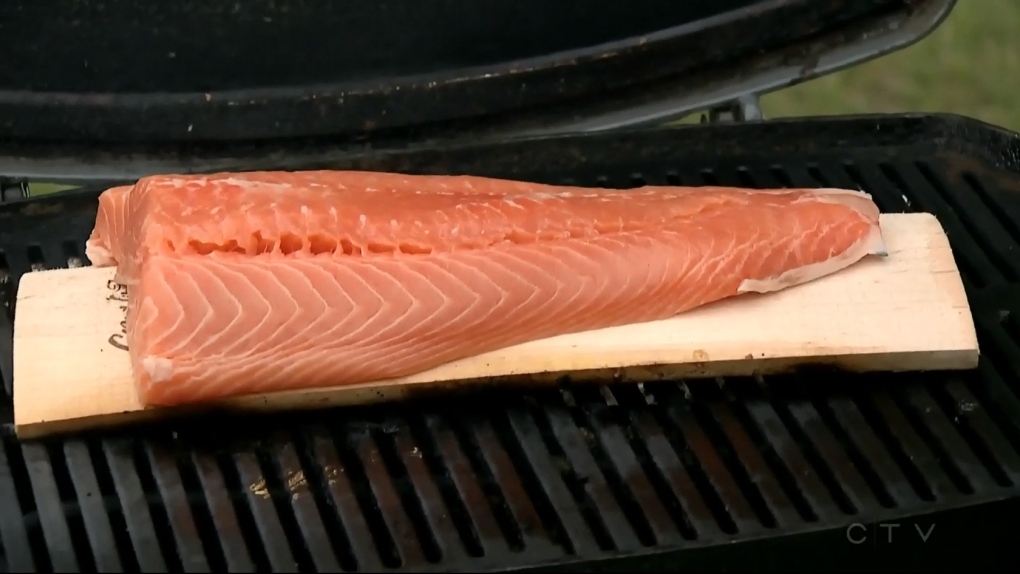 A salmon filet is seen in this undated file photo.

While salmon, maple syrup, mussels, oysters, wild rice, venison, corn, beans, squash and various types of berries are thought of as typical Canadian foods, Croutch says they were mainstays of indigenous meals long before English and French settlers set foot on this side of the ocean.

First Nations people shared their food, knowledge about how to grow produce in a new land, how to boil down maple sap for syrup, and the best way to trap animals.

Eventually the settler population became so proficient they felt they didn't need help and ultimately "fenced off their foods" from the First Nations people, Croutch says.

"Our food systems have been appropriated.... And then they slapped regulations and licences and laws on our food system," Croutch said in an interview at last month's Terroir Symposium in Toronto for members of the hospitality industry.

"So now we have to buy their food."

And it can be expensive.

Fresh food is not always available on reserves these days and prices are often astronomical. And when dishes containing traditional ingredients appear on restaurant menus, they are frequently the most costly.

"If you look at our food items, they're the most expensive food items. They're luxury food items," says Croutch, an Anishinaabe member of the Wikwemikong reserve on Manitoulin Island in Ontario.

"The way the system has been set up to favour European foods over ours, it's a crime because our foods are now so expensive. We can't hunt a moose and you can't get an abattoir to cut it up and sell it -- so even that game meat, the only thing you can get (is) farmed."

Those who eat halal food are allowed to slaughter their meat in this country according to Islamic law "and yet we can't get an abattoir to cut up a moose," Croutch says.

But indigenous chefs are gradually reclaiming appropriated foods, though there's still only a sprinkling of restaurants across the country.

Chef Shane Chartrand, who was raised by a Metis family in rural Canada between Calgary and Edmonton, told an audience at Terroir that he was taught the importance of hunting and fishing and respecting his indigenous Enoch Cree Nation roots by his adoptive father, who pointed out to him that First Nations people were practising "nose-to-tail" eating long before modern chefs popularized using the whole animal.

Rich Francis, chef-owner of Seventh Fire Hospitality Group in Saskatoon, says he's "cooking for reconciliation" as he specializes in his interpretation of modern indigenous cuisine. Francis, a member of the Tetlit Gwich'in and Tuscarora Nations and originally from Fort McPherson, N.W.T., caters and conducts events where he focuses on indigenous foods.

Croutch points out that many restaurateurs who serve foods inspired by indigenous traditions don't give credit to their origins.

But at the Toronto restaurant Boralia, co-owners Wayne Morris and Evelyn Wu are scrupulous about highlighting the source of each dish.

"I think that's the important thing, is giving credit where it's due," says Morris, who grew up in Nova Scotia and has Acadian and Metis roots.

Morris says it's difficult to find references to indigenous dishes because recipes were not written down.

"Basically we know the ingredients they had. The Mi'kmaq where I'm from, their diet was comprised 80 per cent of seafood.... They would have had moose back when there was moose in the southern part of Nova Scotia.... In Ontario we know they had corn and beans. You do dishes that play off that, maple syrup (and) wild foods" such as bison, venison, elk and rabbit.

The couple has served pemmican based on a protein-dense item the Cree toted when travelling. They ran across a reference to the Iroquois making grits out of popcorn but had to develop a recipe.

"This was unique and we tried it out and it was delicious and we put that on the menu. We definitely mentioned the fact that it was Iroquois," says Morris.

Many indigenous chefs across the country lament they can't serve wild game in their restaurants because it's illegal in most provinces.

The game served at Boralia is farmed.

"There is a difference between wild food and farmed food even if it is game meats," Morris says.

"My father was a hunter so we grew up eating wild hunted white-tailed deer and rabbit and partridge and pheasant. I know what it's supposed to be like and I know what we can get now.

"The wild food is definitely better, but it's just not possible here right now."

Food activist Anita Stewart says she has a problem with foraging traditional indigenous foods for profit, or "raping and pillaging the wild."

"Once an ingredient becomes somewhat sexy, then all of a sudden everybody wants it," says Stewart, food laureate at the University of Guelph and a member of the Order of Canada for promoting Canada's culinary identity.

"I can buy ramps in a local grocery store where I live. We shouldn't be able to because they are so fragile -- so until such time as we're sure that the indigenous harvest is being protected, I'd actually just rather people didn't know about it."