Inaugural flight to take people through the curtain of northern lights 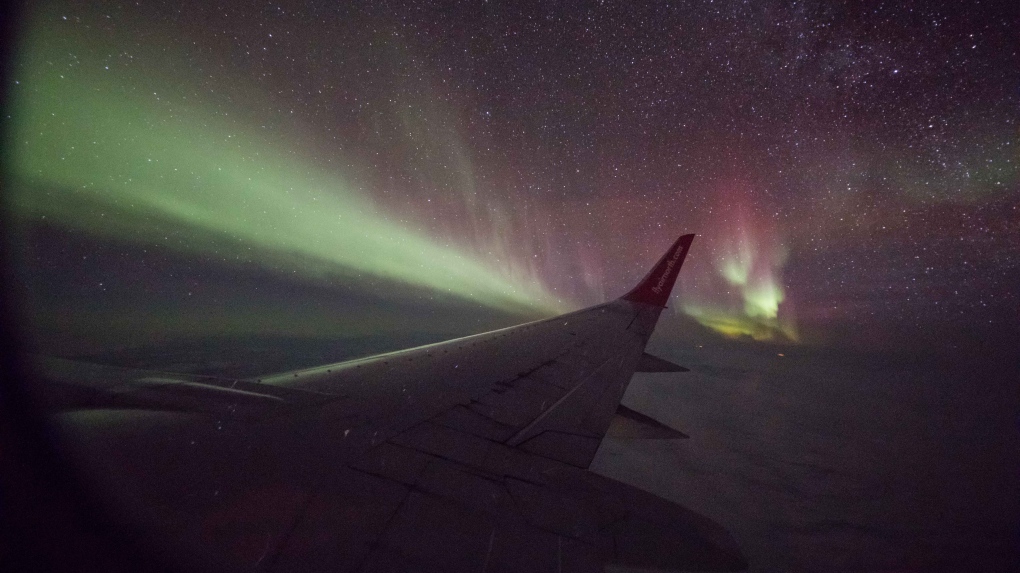 Northern Lights are seen from an airplane in this undated handout photo. (THE CANADIAN PRESS/HO, Neil Zeller Photography)

WHITEHORSE -- Neil Zeller has photographed auroras for about six years but going up in an airplane to see them was high on his "bucket list" and so amazing the first time that he's doing it again.

The professional photographer and self-described aurora chaser was on the test flight last year conducted by Air North, the Yukon Astronomical Society and Travel Yukon, which took off from Whitehorse to fly through the bewitching curtain of northern lights.

Zeller said he can't wait to get back in the air.

The "Aurora 360" inaugural flight, which can carry 70 people, will take off this month.

Aurora 360 spokesman Kalin Pallett said the flight ascends more than 10,000 metres into the auroral oval, the ring above where the aurora borealis appears.

Northern light fanatics will then have about three hours to watch the dancing green, yellow and pink phenomena out the windows of the Boeing 737.

The northern lights are steeped in folklore. Some Indigenous groups describe them as evil, omens of war, dancing spirits, spirits of children and a reminder of the creator. Norse mythology saw the auroras as fire bridges to the sky built by the gods.

Scientists say the lights are caused by particles from the sun interacting with the Earth's magnetic field.

Zeller said seeing the northern lights from the airplane was "indescribable."

For someone who's never seen them before, looking at northern lights from up in the air can be a bit hard to understand because you don't know what you're looking at, he said.

"But the moment they realize they are the northern lights, the first time someone sees them, it's incredible."

Franco Gucciardo was also on the test flight and said the first time he ever saw the northern lights was out the airplane window.

"It was transparent, lights and stars ... green and a little yellow," he said.

The lights were like a "long pulse" that disappear and comes back stronger, he said, adding that seeing them from the flight was a "once in a lifetime experience."

After the flight, Gucciardo said, he found a dark sky to watch from the ground and the difference was telling.

Seeing it from the air was like being enveloped by the lights rather than looking at them "straight up," he said.

Zeller said the northern lights that occurred during the test flight weren't as powerful as he would have liked.

"When it's a really powerful aurora storm it is mind-blowing. You see the colours, the purples and the greens."

The advantage of seeing auroras from a flight is that by flying above the clouds there is almost a guarantee of seeing them, he said.

Aurora storms can last for any time from a few seconds to a few days, Zeller said.

"The sun burps off this energy and sends it towards the earth so, it depends on the strength of that energy," he said. "I've been involved in aurora storms that lasted as long as four days long and as long as 14 seconds."

Zeller said he enjoys looking at and photographing the night skies.

"Once you start photographing the night sky it opens up an entire new world to you."

And chasing auroras is an adventure and an addiction, he said.

"There is no schedule, no script. There's more magic to that."

Where to board: The flights leave Whitehorse, Yukon. The flight path is determined by aurora activity but usually includes crossing over the Arctic Circle, before circling back to Whitehorse.

By Hina Alam in Vancouver.