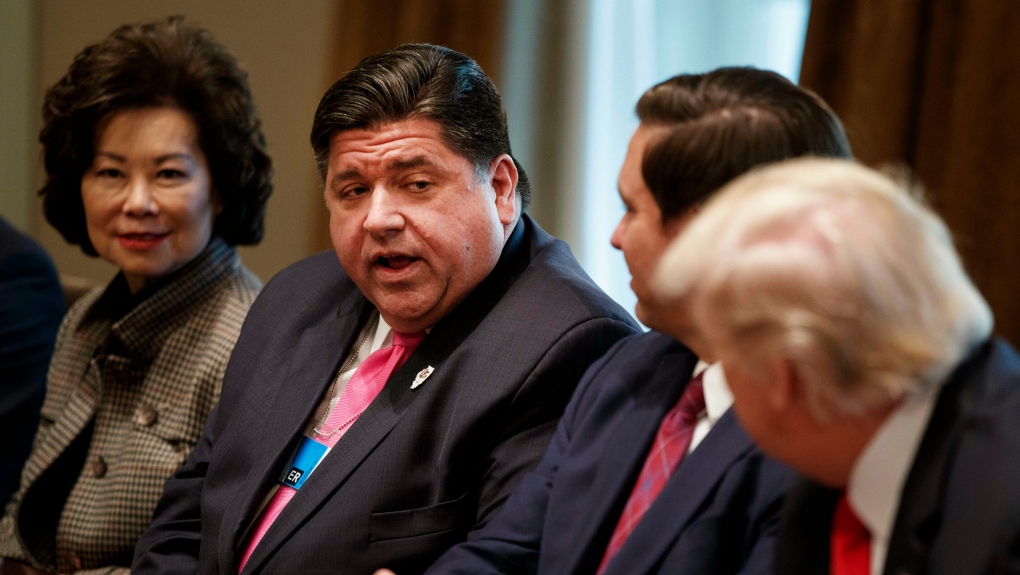 In this Dec. 13, 2018, file photo, Governor-elect J.B. Pritzker, D-Ill., center, talks with President Donald Trump during a meeting with newly elected governors in the Cabinet Room of the White House.

SPRINGFIELD, Ill. -- What if you were governor of Illinois and didn't have a thing to wear?

If you're J.B. Pritzker, you look at your daily schedule.

He's not alone. Joseph Rosenfeld, a fashion and personal style strategist in New York who's from the Illinois city of Buffalo Grove, maps out wardrobes with all his C-Suite executives. "It comes back to one basic premise: relatability," he said.

Pritzker spokeswoman Jordan Abudayyeh said staff members get suggestions from organizers of the governor's events, but the governor ultimately decides what to wear.

Fifty-five of the recommendations on the calendar, disclosed under the Freedom of Information Act, were simply, "Business: suit and tie." Khakis, "button-down and pullover," and "polo with Columbia jacket" also make the mix. The Democrat was advised to forgo neckwear when he hosted dinner for union leaders, but "Bring extra tie options" was the note on Feb. 9, the day of his official portrait.

Despite his girth, Pritzker keeps his ties at a proper length, avoiding the long necktie look that President Donald Trump favours. While Pritzker often opts for a blazer and khakis, they're typically crisply pressed -- no disheveled "Mom jeans" like those for which former President Barack Obama was excoriated at baseball's 2009 All-Star Game.

"When you wear the right thing, you're message-focused," said Patsy Cisneros, CEO of California-based Corporate Icon. "As soon as someone does something that's off -- the tie is too long, the colour is wrong for the time and place -- that will be the focus. What happens to the message of the day?"

Gubernatorial fashion in Illinois gets a lot of attention. Disgraced former Gov. Rod Blagojevich's tailor regularly toted material swatches to the governor's Chicago office. Gov. Pat Quinn had a "lucky" purple striped tie -- more than one, as it turned out. Near-billionaire Gov. Bruce Rauner eschewed neckties with suits, wore big belt buckles, plaid shirts with rhinestone snaps, and a leather vest while astride his motorcycle.

Jim Edgar, the Republican governor from 1991-1999, kept it simple. Indoors -- or even at a late-season University of Illinois football game -- he donned one of a dozen or so dark blue or grey suits. For a parade or picnic in fair weather, he had the same number of blue polo shirts and khakis. But there were fashion fails. Once, he was told his khakis were too light to wear in October. Another time, staff members drew straws to assign the task of telling Edgar to ditch a favourite pair of shoes.

"Times were different," said Edgar, who frowns on the current trend of suits with no neckwear. "I always thought you had to dress the part. You're the governor. You set the tone. ... You have to show respect for the crowd, whoever the audience is."

Democrat Quinn agreed that a governor dressed too casually "diminishes the person and the office." He said his ties of purple, the colour of mourning, were appropriate for the more than 300 military funerals he attended while he was lieutenant governor (2003-2009) and governor (2009-2015).

"I'm not exactly a 'clothes horse' to begin with. I have three or four suits, a few shirts and ties. You wear those six, seven days a week. When they wore out, I went to Men's Wearhouse."

Rosenfeld said the fact that Pritzker's wardrobe guidance is made public "is sort of telling in itself."

"He's being deliberate, intentional, thoughtful," Rosenfeld said. "That is respectful of the public, the people he's dealing with, the way he serves as an officeholder."