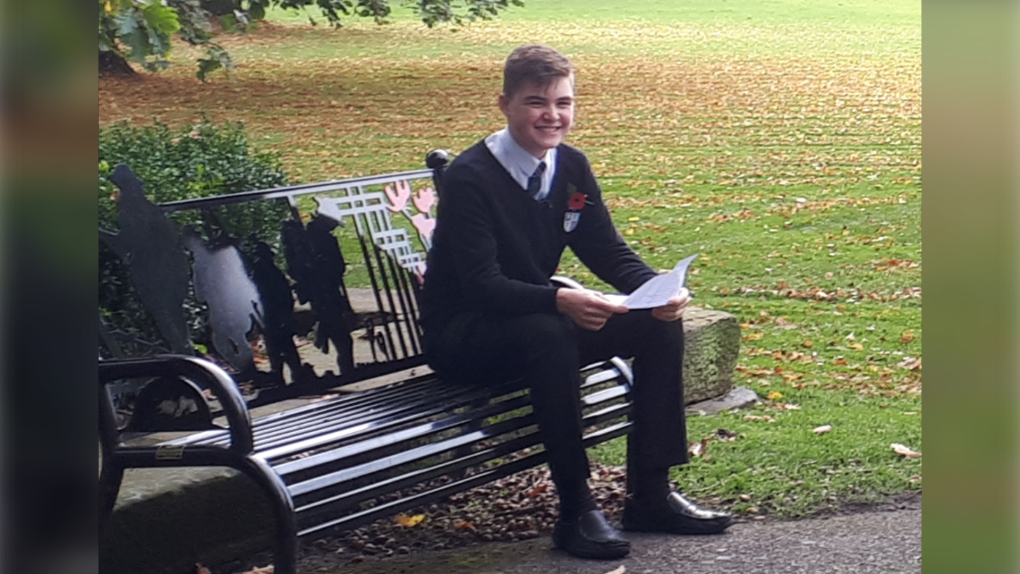 Joshua Dyer, 14, during filming for a Remembrance Day segment on the BBC. (Helen Reed)

A U.K. high schooler whose Remembrance Day poem went viral says the attention has been a “humbling experience.”

Even if he wasn’t that impressed himself at first.

“I didn’t think much of the poem when I’d written it,” he told CTVNews.ca. “Only recently have I gotten into poetry. I used to absolutely despise trying to do poetry.”

Joshua Dyer, who turns 15 this month, wrote “One Thousand Men Are Walking” at school last month. Since ex-military family posted it online, one post with the poem has been shared more than 69,000 times on Facebook. He has even received a letter from Prince Philip’s office thanking him for the poem and been filmed for a segment on the BBC.

“One thousand men are walking, walking side by side,” it reads. “They walk toward the light milord, they walk towards the sun, they smoke and laugh and smile together, no foes to outrun.”

Joshua told CTVNews.ca that he was asked in school to write a poem that could accompany the hymn “On The Road To Passchendaele” at a veteran’s group concert. The resulting 24-line poem, an ode to comradery and sacrifice, was written by himself in about 40 minutes, he said on the phone from Herefordshire county in England.

“It’s been a very humbling experience,” he said. “I’m glad that I’ve managed to touch so many people with it.”

Reactions to his words online have expressed surprise at the teen’s confident writing. Many reached out to ask for permission to read the poem at a variety of events, including Remembrance Day services at churches and army bases, veterans’ mental health conferences and even funerals during eulogies. He was asked by the Royal Air Force in High Wycombe to read it at a Remembrance Day parade and service on Sunday, Nov. 10.

Joshua has long been passionate about the arts, expressing interest in everything from creative writing and painting to theatre and guitar. “I’m naturally a performer,” he said. “I’m known as quite a creative person in a literary sense. I’ve always loved language. I’ve always been quite a big reader.”

His mother, who is a former Royal Air Force member, and his great-uncle, also ex-military, both widely shared the poem in their personal networks.

“We’re really, really proud of him,” said his mother Helen Reed on the phone with CTVNews.ca. “It’s really touching that he’s impacted so widely with his words.”

The response has encouraged the young artist to keep pursuing writing and poetry, which he was initially skeptical about. “It’s definitely inspired me to keep writing,” he said.

But he’s not sure what he’ll dedicate his pen to next. “Trying to follow it up is going to be tough.”

One Thousand Men Are Walking

One thousand men are walking

Walking side by side

The spirit as their guide

they walk toward the light milord

they walk towards the sun

they smoke and laugh and smile together

no foes to outrun

these men live on forever

in the hearts of those they saved

for the path of peace they paved

they march as friends and comrades

but they do not march for war

the meadows lit with golden beams

a beacon for the brave

a reward for what they gave

they dream of those they left behind

and know they dream of them

forever in those poppy fields

there walks one thousand men