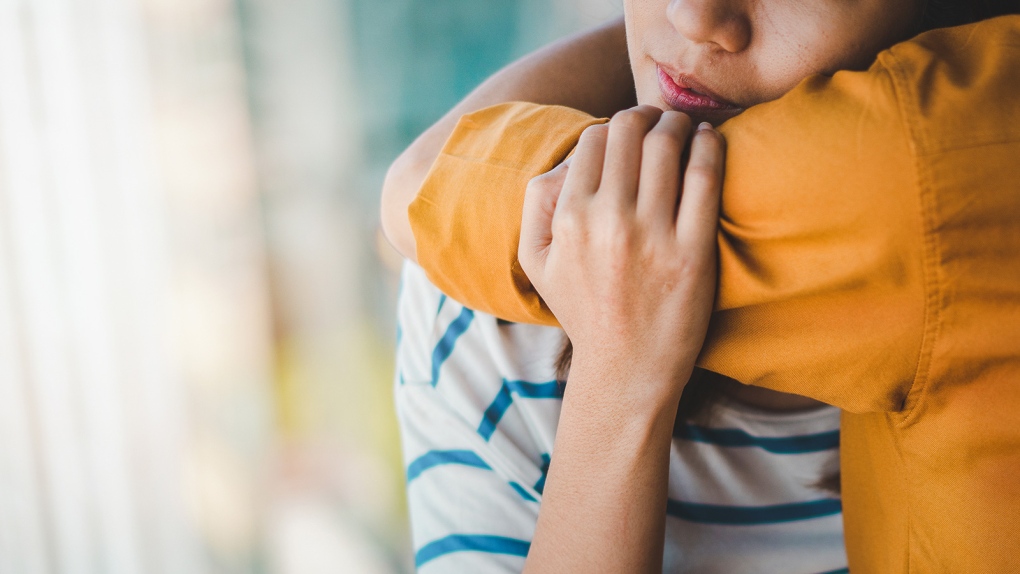 Hugs can help before a stressful situation, but know that they may or may not always be welcome, experts said. (Chanintorn.v/Adobe Stock/CNN)

You have a big test, a difficult conversation or a stressful day ahead -- how much of a difference could a hug from your partner make on your state of mind?

A hug can make a big difference for women, according to a new study. Unfortunately, the effect is not as powerful when it comes to men.

Researchers analyzed how 76 people responded to stress after a hug from a romantic partner in a study published Wednesday in the journal PLOS One. Women who got to hug their significant other showed a decrease in the production of cortisol -- a stress hormone -- compared with those who did not.

Cortisol can have an impact on memory recall, which could make the stressful task ahead even more difficult, said senior study author Julian Packheiser, a postdoctoral researcher with the Netherlands Institute for Neuroscience.

Men didn't seem to get that same perk, according to the study.

The study had a small sample size, but it's expertly done and adds to a solid body of science, said Kory Floyd, professor of communication at The University of Arizona. Floyd was not involved in the study.

It's no surprise that touch helps with the body's regulation, Packheiser said.

Affection with someone you love releases a neurotransmitter called oxytocin, often called the "love hormone," which reduces cortisol levels. This response, paired with social support, buffers against stress, according to the study.

And other studies have looked at the benefits of longer contact, like a massage, on physical stress responses from the endocrine system, which regulates the release of hormones, and sympathetic nervous system, which drives the body's quick "fight-or-flight" response to stressful situations. But this research offers scientific evidence of a more immediately gratifying option.

A massage is not always feasible. "A hug on the other hand is quickly applied and can thus help in buffering against future stressors," he wrote in an email.

Now that some of the restrictions of the pandemic have lifted in much of the world, it's helpful to know that we have another tool at the ready to help defend against the stressors of the world, he added.

It could be a social factor, where many of the men might not have felt as good about the hugs because they are societally perceived as unusual or awkward for men, Packheiser said. It could also have to do with the difference in touch receptors in men's and women's biology, he added.

The result difference was unexpected and is not necessarily the final word on the matter, he said.

"Just because we did not find the effect in men, (doesn't mean) that it is not there," Packheiser wrote in an email. "The effect could simply be smaller and was just undetected."

"A simple advice would be to hug your partner, relatives or friends if you know that they are confronted with stressful situations soon," Packheiser said. If they want the hug, of course.

This most recent study builds on the knowledge that has already existed in the field pointing to how protective affection from a loved one is against the negative effects of stress on the body, Floyd said.

Another study in 2018 showed that hugs after a conflict or negative event helped people feel better. And good physical contact is known to soothe the nervous system, said Lisa Damour, an Ohio-based clinical psychologist specializing in the development of teenage girls.

But affection is not one-size-fits-all.

"It's important to remember that there is individual variation in how people respond to hugging," Floyd said. "For some, a hug is a welcome expression of warmth that can alleviate stress, reduce pain, and promote intimacy. For others, hugging feels invasive or unnatural and can even elevate stress, rather than alleviate it."

Romantic partners often have a good sense of how their loved ones feel about physical affection, but the best hugs are ones that are offered with the recipient's feelings in mind, Damour said. Make sure you check in with what your partner needs rather than assume they need an embrace.

Several people have been shot, two suspects have been arrested and police are searching for a possible third suspect after an attempted bank robbery in Saanich, B.C.

John Horgan is expected to announce Tuesday afternoon that he will step down as premier of British Columbia, sources tell CTV News.