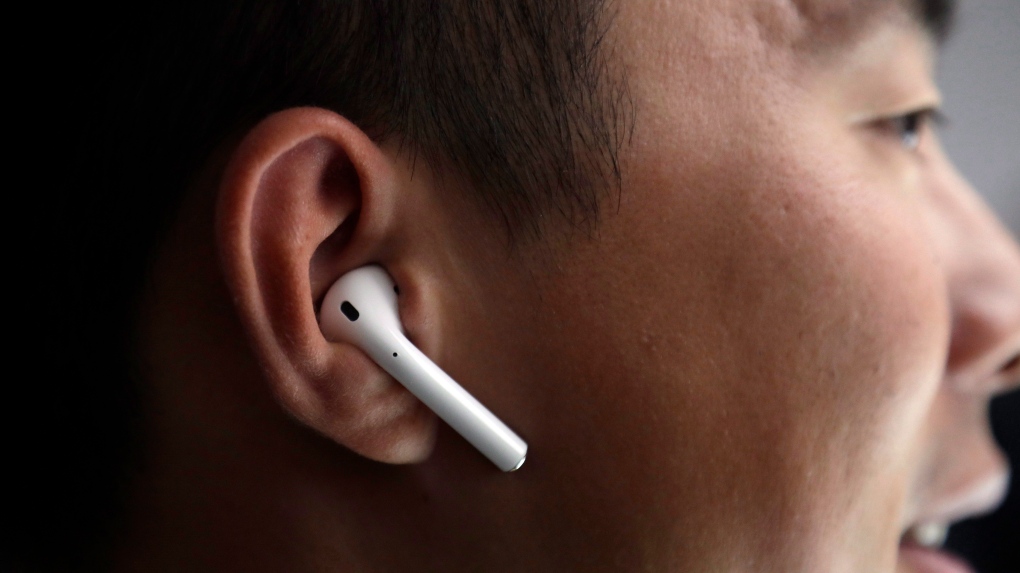 TORONTO -- Apple AirPods are high on Bitta Chowdhury's wish list this holiday season, and the 18-year-old has already decided they'll soon be in his possession whether someone buys them for him or not.

"My plan is to wait until Christmas. If I don't get it, I will get it myself," Chowdhury vows of the slick wireless devices, which run as high as $329 for the latest, most tricked-out version.

"The thing with AirPods is everyone has them now.... It's kind of expected if you're a teen."

Chowdhury estimates that 75 per cent of the kids at his high school have the gadgets, which he admits are largely regarded as status symbols.

It's hard to not get swept up by the hype, says Chowdhury, as he and his pals wandered through Toronto's bustling Eaton Centre on a recent afternoon. And he expects to see even more people sporting the pricey gadgets in the New Year once the gift-giving frenzy subsides.

Of course, the reality is that many families can't afford big-ticket gifts, especially tech items with adult prices that are increasingly targeting teen consumers.

Add in the fact that your teen may barely be able to keep track of their wired headphones, and it's understandable why a parent might be hesitant to splurge on another gizmo.

Parenting expert Ann Douglas says each parent must decide whether their teen is mature enough to take care of such easily misplaced items, and if they're not, she suggests raising those shortcomings gently and with specific examples.

The challenge for many parents this season is how to manage extravagant gift expectations if they're not in the budget, says Douglas.

Douglas is the mother of four kids, now aged 22 to 31, and says she knows the holidays can be fraught with gift-related "trauma and drama" -- especially among brand-conscious teenagers.

"With our kids we used to say, 'We have a budget for your gift (and) you can sort of look within that range,"' says Douglas.

"It was like, 'We can give you money towards that but then you're going to have to have either holiday money or birthday money or part time jobs to round that out."'

Consider this a teachable moment for your teen, says Douglas, especially if they have their heart set on something that stretches the family finances.

"First of all, you have to recognize that (limit) in yourself so that you can figure out what your path forward is. If you don't want to overspend this Christmas, what is reasonable for you?"

Know your financial means and the imperatives guiding those spending decisions -- Do you want to prioritize experiences instead of things? If it involves technology, what usage restrictions -- if any -- will that gadget come with? What message do you want to send about consumerism in general?

Most of all, be realistic about what you can afford, she says, and don't be afraid to involve the kids.

"Kids need to know what you're thinking and what they can reasonably expect," says Douglas, whose book "Happy Parents, Happy Kids," came out in February.

"By the time kids are teenagers they have a bit of a sense of what's going on in the family with money but I find that you can walk that fine line. You don't want to make your child freaked out, like, 'We're on the verge of financial meltdown,' (but) you also don't want to pretend that there is a money tree."

Chowdhury expects his parents would balk at fulfilling everything on his wish list, which includes a new iPhone.

So he's prepared to curtail his expectations, negotiate what's reasonable, help them hunt for the best deals and chip in his own money.

"Morally, I think if my parents are already getting me a phone it's such a big thing I shouldn't ask for anything else. But if I was to ask, for example, for a phone and a new winter jacket I'm sure we could have worked something out," says Chowdhury, whose Hindu family doesn't celebrate Christmas, but does exchange gifts.

And with college or university on the horizon, Chowdhury says he's eager to start asserting more independence.

Financial adviser Linda Stern urges families to work money matters into the conversation throughout the year -- be upfront about saving for a family trip in the months leading up to a summer vacation, or cutting back after the vacation to pay off the bills.

Teens should know that spending in one area might mean cutting back in other areas, like birthday or Christmas presents, she says. And even little kids can grasp basic money concepts.

"Definitely start when they're little and you take them to (the toy store) and they're five years old and you say: 'You can choose one present.' They come up with three, and they're crying, and you say, 'No, you have to choose one."'

When it comes to holiday gifts, Stern suggests getting teens to whittle their wish list into a handful of choices ranked in order of their must-have imperative.

This would allow other family members to contribute and share the costs, but it also forces the teen to weigh the pros and cons of each item, examine how they plan to use the gift, and honestly evaluate whether they want it now or are willing to wait and help save for it.

At the end of the day, it's up to the parent to hold the line, Stern adds. She notes that she's worked with many parents who have a hard time saying, "No."

"There's the feeling of, 'I have to do this for my kids.' They want to indulge them, they don't want to disappoint them, even at the expense of their own credit," says Stern, an insolvency trustee with Toronto's Crowe Soberman Inc.

"There's a lot of guilt in terms of obligation and kids and I think that it's putting the parent at risk and the child is not learning. They're not learning good habits."