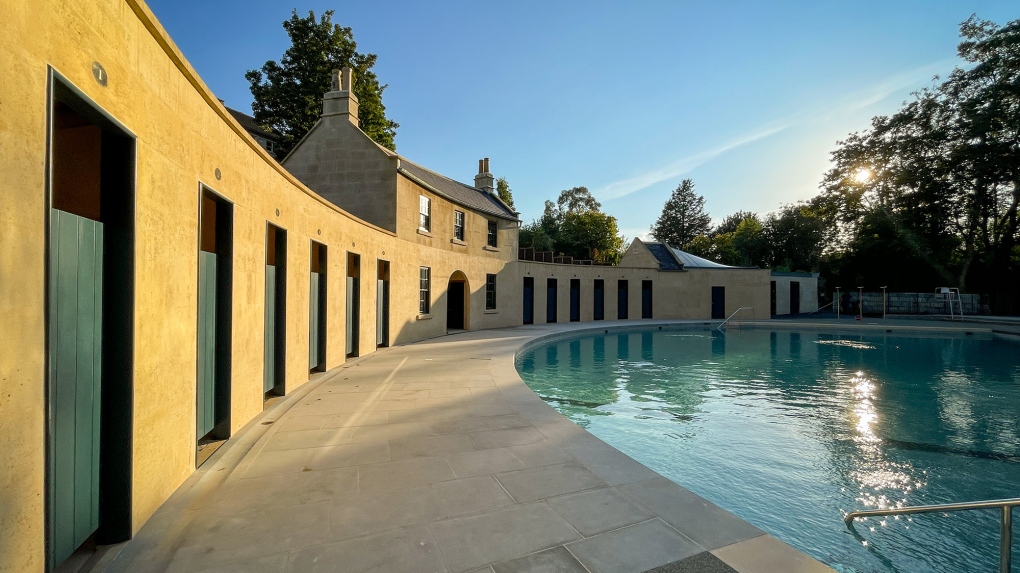 With its honey-coloured stone, crescent-shaped changing rooms, still water and idyllic location on the banks of the Avon river in Bath, England, Cleveland Pools seems to have been plucked from the pages of a Jane Austen novel or an episode of "Bridgerton."

But the 207-year-old outdoor swimming pool has not always looked so picturesque. It reopened last weekend, welcoming swimmers for the first time in almost 40 years -- the culmination of an 18-year, community-led campaign, with a renovation costing more than £9 million (US$9.8 million).

The 100 lucky swimmers -- who had all entered a competition to be there -- braved the unheated water under the last rays of the summer sunshine, enjoying the 25-metre (82-foot), crescent-shaped main pool, and a smaller, shallower splash pool.

Built in 1815 according to the designs of architect John Pinch, Cleveland Pools is the U.K.'s oldest public outdoor swimming pool and originally drew its water directly from the Avon.

Its earliest swimmers, according to a local-history research paper, paid a yearly subscription fee and included an Arctic explorer, clockmakers, surgeons, architects, bankers and a lawmaker.

During its Victorian heyday, the eccentric Mr W. Evans, along with his pet baboon, presided over the pools, teaching swimming, and diving into the pool from a great height while wearing a tall hat to protect his head, according to Cleveland Pools' website.

But faced with competition from indoor, heated pools, Cleveland's popularity dwindled in the late 1970s.

It shut in 1978 and, despite short-lived attempts to revive it, closed permanently to swimming in 1984. For a time, the pool was used as a trout farm before it fell into disrepair and was put up for sale by the local council in 2003.

A group of local people formed the Cleveland Pools Trust shortly afterward to protect the site and they raised the funds needed to refurbish the pools from various sources, including the National Lottery and the government.

Construction eventually began in May 2021, and it proved complicated -- all materials had to be transported to the site via the river on a barge.

"Not only have we had to navigate around existing pools and on quite a sloppy terrain, but we've also had to bring all of our materials and plant via the river," project manager Mark Tregelles told ITV. "So it's not something you do every day."

"I am proud to have played a part in a restoration that many didn't believe was possible. It's been complex and very challenging. But it's also been unique, the project of a lifetime," the BBC quoted project director Anna Baker as saying.

Starting next year, the pools will be heated for the peak summer months using heat pump technology that converts energy from the Avon.

BREAKING | Bank of Canada raises key interest rate to 4.25 per cent, its highest since 2008

Apple Inc has been sued by two women who said its AirTag devices have made it easier for their former partners and other stalkers to track down victims.

Thousands of police officers carried out raids across much of Germany on Wednesday against suspected far-right extremists who allegedly sought to overthrow the government in an armed coup. Officials said 25 people were detained.

The discovery of a giant 100 million-year-old marine reptile's skeleton in Australia has been hailed by researchers as a breakthrough that may provide vital clues about prehistoric life.

Time Magazine on Wednesday named Ukrainian President Volodymyr Zelenskyy its person of the year, awarding him the accolade 'for proving that courage can be as contagious as fear.'

A seven-month-old baby is in 'desperate' need of a liver transplant in Toronto, but all she can do is wait for her name to reach the top of the donor list or hope for a living match.