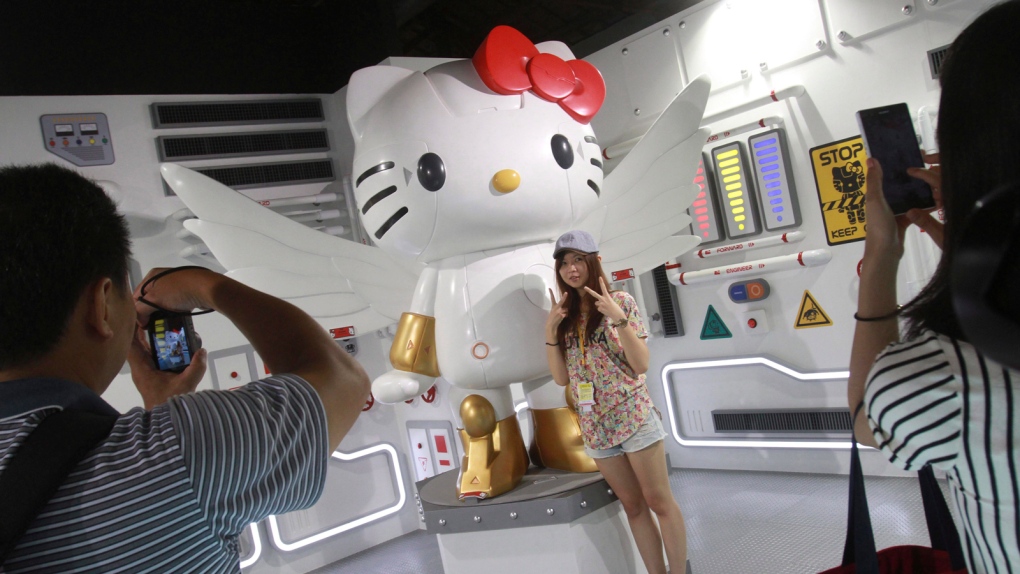 A visitor poses with Hello Kitty on display as she has her souvenir pictures taken during an exhibition of Hello Kitty and its related items including interactive games in Taipei, Taiwan, Sunday, July 14, 2013. (AP / Chiang Ying-ying)

She may look like a friendly feline, have pointed cat-like ears and a handful of whiskers adorning her tiny nose, but don't be fooled: Hello Kitty is not a cat.

The shocking revelation about the world-famous Japanese cartoon character was revealed earlier this week in a Los Angeles Times article.

In the article, which was published ahead of a Hello Kitty retrospective opening at the Japanese American National Museum this fall, U.S. anthropologist Christine Yano dropped the bombshell news.

Yano said she discovered that the Japanese character is not a cat after all, when she was corrected by Sanrio while preparing texts for the upcoming exhibit.

"I was corrected – very firmly," Yano told The Times. "That's one correction Sanrio made for my script for the show. Hello Kitty is not a cat. She's a cartoon character. She is a little girl. She is a friend. But she is not a cat."

Yano said she was told that further proof that the cartoon character is not a cat comes from the fact that she's not shown walking on all fours, she sits like a two-legged creature, and she has a pet cat of her own named "Charmmy Kitty."

Needless to say, the news shocked Hello Kitty fans far and wide, with everyone from Katy Perry to Josh Groban chiming in on Twitter.

I just got off stage to find out that Hello Kitty is not a cat. This is worse than finding out Pluto is not a planet.

Hello Kitty is a cat. She has whiskers and a cat nose. Girls don't look like that. Stop this nonsense.

IT'S OKAY HELLO KITTY FANS, KITTY PURRY IS A CAT.

But a quick peek at the official Hello Kitty fan site from Sanrio reveals that the character is in fact a "happy little girl" named Kitty White, who hails from the suburbs of London, England.

A Sanrio spokesperson later told AFP that the character is a "100-per cent personified character.

"The design takes the motif of a cat, but there is no element of a cat in Hello Kitty's setting," the spokesperson said.

The spokesperson added that while Hello Kitty fans outside of Japan may have been shocked by the news, nobody inside the country likely found it surprising.

"There is an explanation we have made the whole time, and I think that's how people have understood it," the spokesperson said.

In her 40-year existence, Hello Kitty has appeared on countless items, from water bottles, change purses and posters. The Sanrio star has also paired with seemingly unlikely partners over the years, even appearing on a Playboy Leica camera  and Major League Baseball paraphernalia.

In celebration of her 40th anniversary, the Museum of Contemporary Art in Los Angeles will be hosting the first-ever Hello Kitty Con from Oct. 30- Nov. 2.

With files from AFP