Gaultier bids the runway adieu on final day of couture 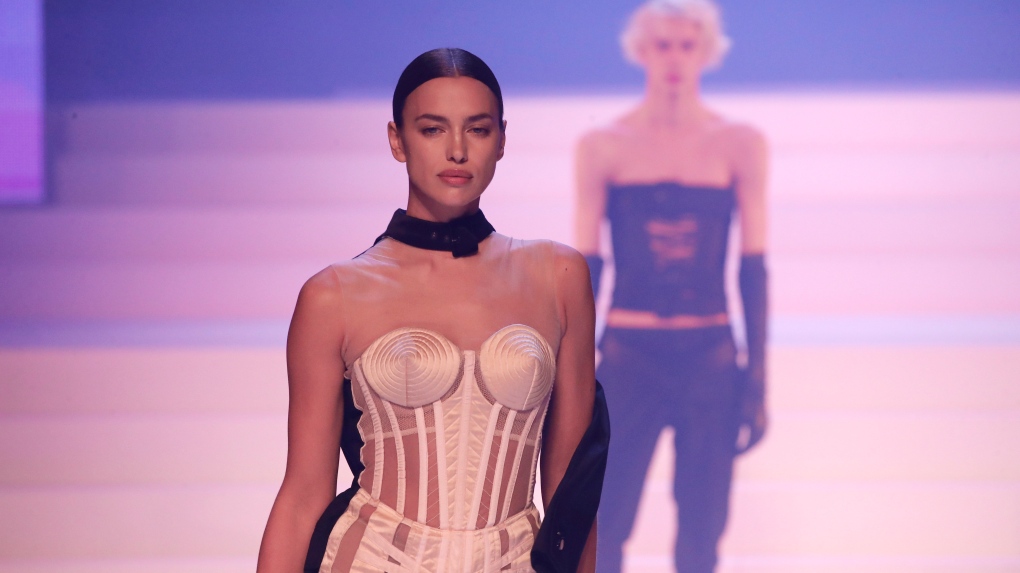 PARIS -- As Jean Paul Gaultier prepared to bid adieu to the Paris couture runway with a fashion show and glitzy after-party at the Chatelet Theater, John Galliano put on a tongue-in-cheek show for Maison Margiela on the final day of Paris Fashion Week.

Here are some highlights of Wednesday's spring-summer 2020 haute couture displays.

A soundtrack that featured Julie Andrews singing the "Sound of Music" was just enough to coax smiles from grumpy front row guests at Maison Margiela's morning show. The Artisanal couture collection shown on a freezing morning took place in a venue with no heating -- and no coffee. It also started 40 minutes late for no ostensible reason.

At least the delay provided powerful figures in fashion -- such as former Dior designer Raf Simons and Vogue Editor-in-Chief Anna Wintour, an opportunity to catch up.

John Galliano's usual tongue-in-cheek mood pervaded colorful and deconstructed co-ed designs. The blue, floor-length dress at the start of the show came perforated with flappy circles that looked like they'd been removed with a paper hole punch. The head wear? Two leaves of cabbage held together with a tulle veil.

There were several ensembles that demonstrated Galliano's design prowess, such as a dark coat that was fitted entirely only on one side in an abstract take on the nonchalant style of holding a coat over a shoulder.

At times, though, the fashion icon strayed this season into the plain silly.

Jean Paul Gaultier has announced his retirement from runway couture collections -- the designer's only remaining runway show outlet since ending his ready-to-wear collections in 2014. Hanging up his couture pin cushion - and, with it, effectively his catwalk career - is a logical step for the onetime enfant terrible of French fashion, who had acknowledged growing disillusioned with the frenetic pace of the modern fashion industry.

In a tweet, the 67-year-old Gaultier said the Wednesday night couture show "celebrating 50 years of my career will also be my last." He added: "But rest assured, haute couture will continue with a new concept."

After founding his eponymous label in 1982, Gaultier shocked the fashion industry by introducing man-skirts and kilts to menswear. He became known as a designer who fused gender identity and empowered women.

Looking back through decades of his creations some years ago, Gaultier told The Associated Press that it was a bustier that first made him a household name in the United States - the one Madonna wore on her "Blond Ambition" tour in 1990.

Louis Vuitton is romancing the stone. The LVMH-owned house has unveiled to private clients in France the latest member of its family: The world's second-largest rough diamond.

The age-old house announced last week that it was the proud new owner of the 1,758-carat Sewelo diamond, which is the size of a tennis ball.

The uncut stone discovered in Botswana is named "Sewelo," which means "rare find" in the Setswana language.

The diamond, which was bought for an undisclosed sum of money, has a raw black appearance owing to its carbon patina. Images show that it has a slight blueish colour.

Its acquisition for an undisclosed sum is the latest signal that LVMH is getting serious about jewels after November's acquisition of Tiffany & Co. for $16.2 billion. LVMH also owns Bulgari.

Is Pierpaolo Piccioli losing the Midas touch? The talented Valentino designer, who for seasons turned everything to gold, has cooled creatively of late.

This was sadly on display on the final day of couture week, one that Valentino traditionally dominates.

On Wednesday evening, even as guests like singer Mika and actress Clemence Poesy applauded vigorously, the designs left behind a sense of incoherence.

In the show notes, Valentino seemed to consider the divergence of styles an asset: "Uniqueness is what makes all human beings identical," they said.

Yet beautiful as many of the individual designs were -- from giant ethnic fringed earrings and eye-popping colour to richly-textured or backless gowns that shimmered under the palatial crystal chandeliers -- they appeared one after the other as if haphazardly. Polka dots, giant bows, colour blocking and different silhouettes followed contrasting styles.

There seemed to be no dominant idea.

Given that the solo Piccioli staged two major shows -- menswear and couture -- in the space of a week, perhaps the creative stumble is owed to the inhuman pace of the fashion calendars?

The Lebanese designer loaded his spring couture with intricate detailing and complex silhouettes that represented thousands of hours of work.

It sometimes gave the dramatic 1970s-infused collection a regal quality.

One key look was a sheer silk, latticed pale gray mini-dress with lace and decorative appliques, giant Juliette sleeves and a neck scarf. The model wore cascading bejeweled earrings with a stern expression, and pulled an aristocratic silk train behind her.

It felt rather indulgent, and the truncated silhouette - one repeated in Saab's 59-look display - appeared a tad busy. It was disappointing, given the amount of time it must have taken to construct the garment, but at least it was attention-grabbing.

When Saab went to his bread-and-butter cinched-waist gowns, the silhouette fared better. These styles are, after all, why he has such an impressive celebrity following.

This season, they came in baby blue, silver sand and green-yellow among other colours.