Five things to know about Costco's US$4.99 rotisserie chickens 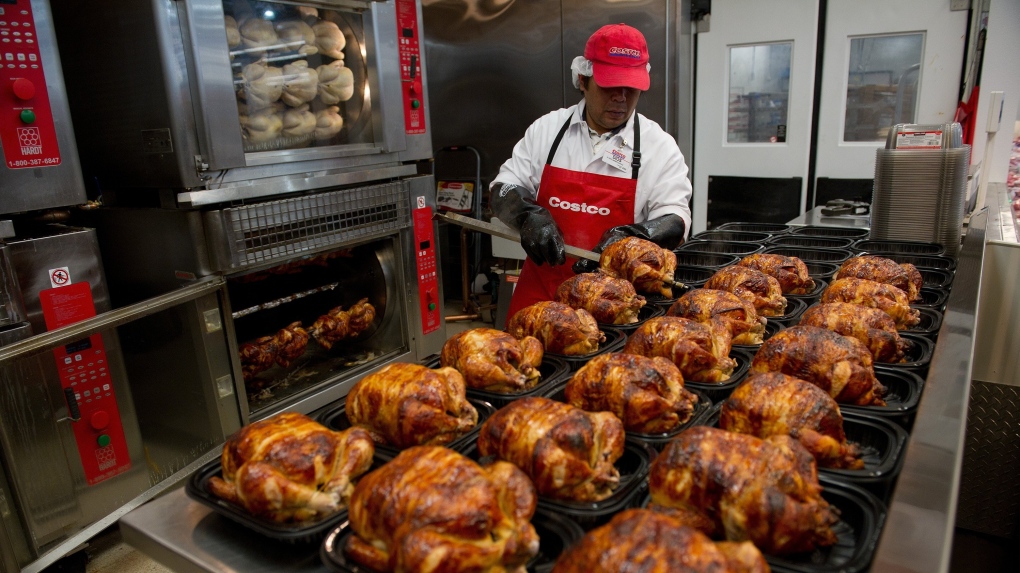 Rotisserie chickens from Costco can be seen in this image. (David P. Morris/Bloomberg/Getty)

Costco is willing to go to extreme lengths to keep its prized rotisserie chickens at US$4.99.

For the past few years, it's been recruiting farmers in Nebraska and recently opened a sprawling, $450 million poultry complex of its very own in Nebraska.

Costco sold 91 million rotisserie chickens last year, more than double the number from a decade prior.

Here's what you need to know about Costco's cheap chicken strategy:

1. Costco locates rotisserie chickens at the back of stores

For Costco, the chickens are a lure, pulling customers into stores and getting them to browse the aisles, adding sometimes hundreds of dollars worth of items to their shopping carts before they pick up that bird.

Pricing chickens at $4.99 is one of the ways Costco hooks warehouse club members and convinces them to pony up each year for a membership.

"As prices changed dramatically and we saw the competition raising the price, it was a hot price," Costco's chief financial officer Richard Galanti said in 2014.

Costco was willing to sacrifice "$30 million, $40 million a year on gross margin by keeping it at $4.99," Galanti said the following year. "That is what we do for a living."

3. Costco has been having challenges finding birds weighing six pounds

Americans are eating more chicken than ever before and bird weights are climbing to keep up with demand.

"We were having trouble getting the size bird we wanted on a consistent basis," said Jeff Lyons, senior vice president of fresh foods at Costco. "We couldn't take a seven-pound bird or an eight-pound bird and make it work. They're too big. They wouldn't even fit on our rotisserie line."

Traditional chicken suppliers like Tyson and Pilgrim's Pride are also producing fewer birds to be sold as rotisserie chickens.

An estimated 15% of chickens today are sold as whole birds, down from around 50% of all poultry in the 1980s, according to the Department of Agriculture.

That's why Costco is seizing control of its chicken supply chain. Costco believes it can slash costs by bringing production in house, saving up to 35 cents per bird.

4. Costco will control the production process in Nebraska from farm to store

The retailer is building a poultry complex in Fremont, Nebraska, a farming town near the Iowa border. The complex includes a processing facility, hatchery and feed mill.

Costco picked Nebraska for the poultry plant because the area had grain, water and labor available. Those are the three biggest costs involved with chicken production.

The nearly 400,000 square-foot plant in Fremont will employ 950 workers. The plant will take 45 weeks to ramp up to full production. Once it's at full speed, the plant will process about 100 million chickens a year, or 40% of Costco's annual chicken needs. Costco will process around two million birds a week in Nebraska to supply to stores on the West Coast.

Costco will control the production process from farm to store, making key decisions down to the grain chickens eat and the type of eggs hatched.

5. There's been backlash in Nebraska to Costco's operations

Costco has put its socially-conscious corporate reputation on the line, fending off local critics who have rallied against the Nebraska operation.

Its poultry farm ambitions have sparked backlash among environmentalists and farmers' advocates in the Fremont area.

Opponents of the plant in Fremont like Randy Ruppert, a local activist, worry about the environmental impact of the plant and poultry barns, such as water contamination from runoff, ammonia from chicken feces and other health risks.