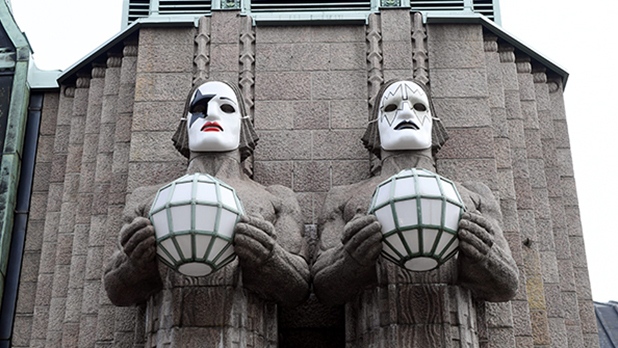 Statues with painted masks in tribute to the members of the KISS rock band at the Helsinki Central Station. (Vesa Moilanen / Lehtikuva / AFP)

The statues, officially called "lantern bearers" but better known among Finns as stonemen, were given their makeover to mark the band's 10th concert next week in the Nordic country, which has one of the world's highest concentrations of headbangers.

One of the four selected, 46-year-old Sannaliina Kuussaari, said she was 13 when she attended her first Kiss concert and she is planning to take her daughter to see the band on May 4.

"I'm a designer (by profession) and usually when I work, I listen to music at the same time. Kiss is very energising for that purpose," Kuussaari told AFP as she was preparing one of the masks at the railway station.

She has been an active member of the band's Finnish fan club, Kiss Army Finland, originally founded by the lead singer of Lordi, a Finnish hard rock band.

Heavy metal is hugely popular in the Nordic countries but particularly in Finland, which selected the rock ensemble Lordi, with its gruesome monster costumes, to represent the nation in the 2006 Eurovision song contest.

Lordi, with stage pyrotechnics and the catchy anthem "Hard Rock Hallelujah" became the first hard-rock contestants to win the competition.