Deep underground and back in time: a tour of the 'sacred' Bell Island mines 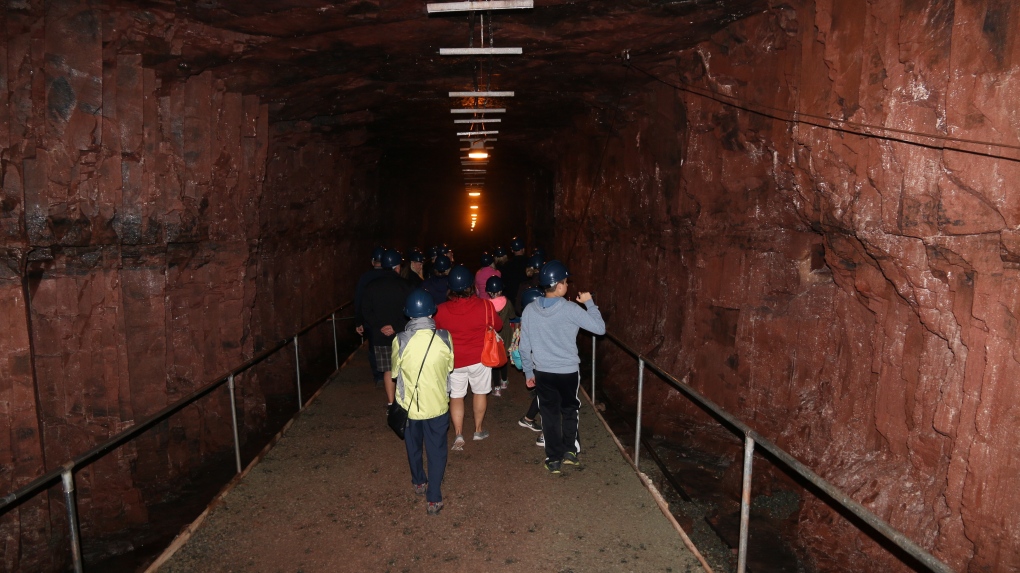 This handout photo was taken on Fri. Aug. 11, 2017, during the No. 2 Mine tour on Bell Island, off Portugal Cove, Newfoundland and Labrador. THE CANADIAN PRESS/HO-Mike Wert

BELL ISLAND, N.L. -- Alice Kennedy was well into her 70s before she ever saw the black, cold depths of the iron ore mine that sustained her family for generations.

She took a public tour of the rocky labyrinth deep underground on Bell Island, off Portugal Cove, N.L., about 15 years ago.

"She was crying at the top of the mine," recalled her daughter, Teresita (Teddy) McCarthy, now manager of the popular tourism draw.

"She said: 'You know women are not allowed in the mine."'

Women and girls were considered bad luck and therefore banned as men and boys as young as nine dug out almost 80 million tonnes of iron ore hauled up into daylight between 1895 and 1966 when the last of six Bell Island mines closed.

McCarthy's mother was overcome when she finally saw the winding tunnels of blasted and hand-chipped rock that go on for almost five kilometres, at one point reaching almost 540 metres below Conception Bay.

Many of those tunnels are now flooded. But the No. 2 mine and museum attract about 13,000 visitors from all over the world each year, McCarthy said.

Iron ore once shipped from the scenic island a 20-minute ferry ride from Portugal Cove, northwest of St. John's, helped build Germany's combat arsenals in both the First World War and the Second World War.

It was used "against us," said tour guide Ed Fitzgerald.

There's still more than two billion tonnes of ore at the site, which shut down in 1949 when surface ore was found in Labrador City. It wasn't as high a grade compared to Bell Island but could be removed more cheaply, Fitzgerald said.

Public tours of the mine, organized from June 1 to Sept. 30, begin with a safety briefing and mandatory hard hats are provided. Tour guide Bernie Hammond asked if anyone in the group, which included children as young as two, had any heart or lung conditions, fear of enclosed spaces or mobility issues. The hour-long walking tour involves sometimes uneven surfaces on about a 10-degree slope.

As McCarthy likes to say, there is a sense of the sacred as you walk down into the damp darkness that was lit over time with candles, seal oil lamps and finally electricity. Old shovels, bottles and wheels of the carts that men filled over and over are now artifacts that sit against the rock walls.

"To me, it's like walking into a church because you sense the fact that people worked, lived and some died in that mine," McCarthy said.

Hammond described how 106 men and boys perished over the years mostly because of accidents. There was little pollution and none of the high rates of black lung disease suffered by coal miners, she said.

"Every time we do a tour, whether we tell you the light side or the sad side, we do it as a tribute to their honour, their hard work and their sacrifice."

Face-cleaners had the most dangerous job. They were the first men in after blasting who used crow bars to chip away at loose, sharp rocks left on the tunnel walls and ceiling.

As many as 2,200 people were on the payroll from all over the Avalon Peninsula with comparatively well-paid jobs.

"There was a saying during the Depression that if somebody showed up on Water Street (in St. John's) with a $50 bill, you knew they were from Bell Island," McCarthy said.

Amanda Aylward from Witless Bay, south of St. John's, was part of a tour group that included six children aged two to five.

She said she would highly recommend the No. 2 mine as a unique and family-friendly adventure.