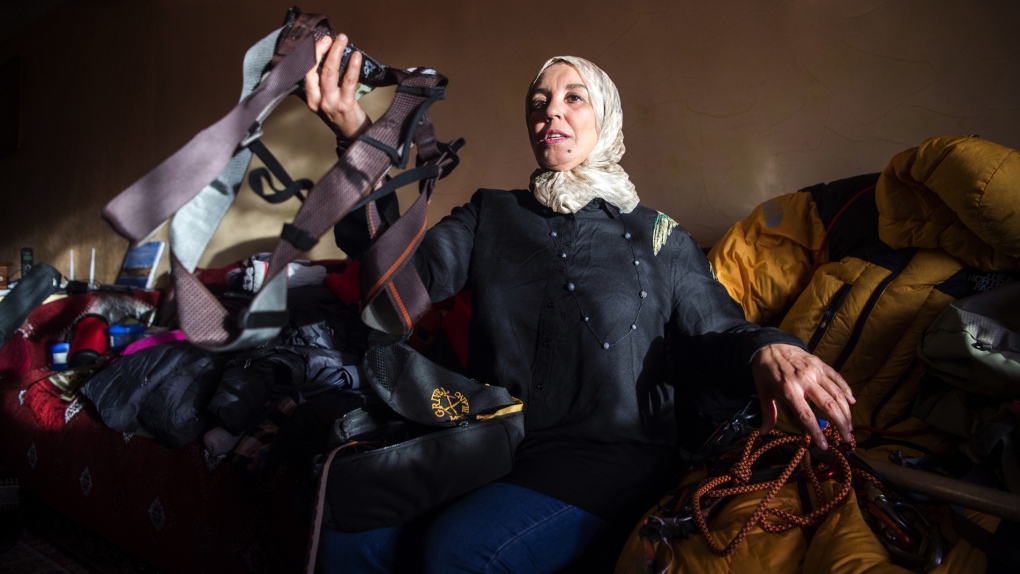 Moroccan mountaineer Bouchra Baibanou, the first Moroccan to scale the seven summits of the world's continents, seen with her harness in her home in the Sidi Moussa district of Sale near Rabat, Morocco. (FADEL SENNA / AFP)

The first Moroccan to scale the seven summits of the world's continents, Bouchra Baibanou wants to inspire a new generation of women who "dare to believe in themselves".

"With will power and perseverance, you can get there," said Baibanou, 49, weeks after reaching the summit of Antarctica's Mount Vinson.

Conquering the 4,897-metre peak capped an eight-year journey, during which Baibanou travelled the globe to climb each continent's highest mountain.

"I am proud, as a Moroccan and as a woman," she said from her home in Sale, neighbouring the capital Rabat, where trophies adorn her living room.

That pride was evident atop Vinson, where Baibanou clutched her country's flag -- and a banner with a campaign message -- at temperatures of minus 40 degrees Celsius

"From the summit of Vinson, Baibanou continues to support the fight combatting violence against women and girls," UN Women Maghreb wrote on Twitter on January 1, after her ascent.

Wearing a beige headscarf and black shirt, Baibanou described the mountain as "a great school" as she reeled off the attributes needed to scale a peak.

But her passion has required a financial slog.

Baibanou is a government engineer and climbed the seven peaks with a budget of two million dirhams ($281, 015).

Sponsorship raised 60,000 euros for the Vinson expedition and 80,000 for Everest.

"It's not very rewarding to be a mountaineering adventurer in Morocco," she said.

As well as doing community work, Baibanou gives talks in schools and universities around the country.

She is also campaigning to develop mountain tourism in Morocco, especially improving the Toubkal National Park and "reinforcing security".

In December, Morocco was shaken by the murder of two Scandinavian women hiking in the mountains.

"This terrorism act does not represent my country -- one of peace and tolerance," said Baibanou, who was outraged by the killings.

Despite her mountaineering success, Baibanou only discovered hiking aged 15 during a summer camp.

Her father, a mechanic, and her stay-at-home mother were not very interested in nature or sport.

It was not until she was 26 that Baibanou climbed her first peak in Morocco -- Toubkal.

It was an exhilarating experience, spurring her on to take up mountaineering in France's Chamonix region and climb Mont Blanc.

She still hikes close to home and last year took a group of around 30 teenagers up Toubkal, the country's highest peak at 4,167 metres.

"I hope to be a role model, above all for young women -- for those who dare to believe in themselves," said Baibanou.

While she travelled the world mountaineering, her 14-year-old daughter was looked after by family, including her husband, who supported her ambitions.

For Baibanou, there's nothing better than an extreme sport to "overcome ones' fears" and learn to "not give up at the first hurdle".

She has seen young women who were hesitant at the start of their first climb transformed by the experience.

They face "a lot of discrimination" in Morocco, said Baibanou.

"A lot of girls don't continue their studies but, if we give them the power, they will achieve."