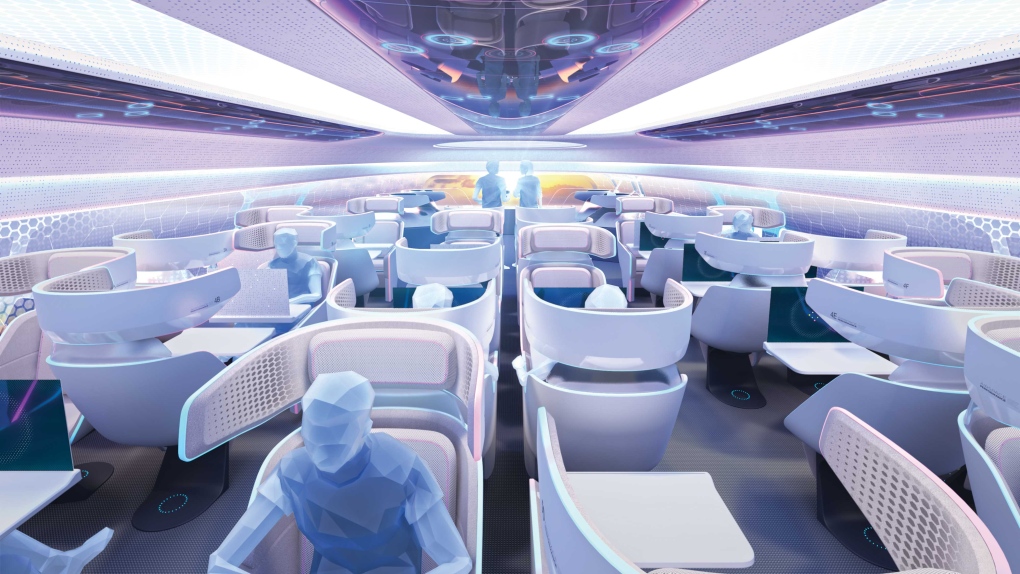 Airbus' vision for a next gen airplane cabin is one of the nominees. (Courtesy Crystal Cabin Award)

From a hyper-connected, personalized cabin of the future to rotating airplane seats that make enduring economy that much easier, this year's Crystal Cabin Awards shortlist is chockablock with the aircraft innovations you didn't know you needed.

Of course, depending on your personal feelings about the trend towards in-air connectivity and high-tech personalization, some may be concepts you'd rather not see become reality.

Still, the designers behind these innovative ideas reckon they could transform the airplane interior experience for the better -- and now they've got the seal of approval from one of the aviation industry's most prestigious awards.

Over 100 entries have been whittled down to a comprehensive shortlist -- with categories including "In-flight Entertainment and Connectivity" and "Visionary Concepts" due to be announced at this year's Aircraft Interiors Expo in Hamburg, Germany in March 2020.

The quest to transform the economy experience has been heating up in recent years, from Universal Movement's "Interspace" seat -- which has foldable wings on either side of the seat for added privacy and comfort -- to, at the other end of the spectrum, Aviointeriors infamous "stand-up" airplane seat.

The question of how to sleep in a budget airplane cabin is only becoming more ubiquitous as super long-haul flights like Qantas' hop between London and Sydney, dubbed Project Sunrise, start to take off.

The Crystal Cabin shortlist offers up a couple of compelling concepts designed to tackle discomfort in long-haul economy.

Engineering company Heinkel Group presents its "Flex Lounge" proposal, which suggests a flexible configuration for seat rows in economy cabins. Post take-off, flight attendants can rearrange the rows so that passengers traveling together can face one another, allowing for a more intimate, casual experience for families, groups of friends or co-workers traveling together.

Meanwhile, Adient Aerospace noticed the popularity of the airplane bulkhead seat and took that as its jumping off point for their "Space For All" design.

In Adient's vision, the three seats at the front of the airplane include an extending mechanism that expands out from the lower bulkhead wall, transforming the space into a sofa-style flat bed for families to share.

Some of the nominated airplane seat concepts are designed for aircraft that are still in their development stages. The Flying-V airplane, for example, is a fuel-efficient aircraft currently in development at Delft University of Technology in the Netherlands, in partnership with KLM. Delft has submitted a design for collapsible, flexible seats that turn into flat beds in a bunk-bed style design, for maximum space efficiency.

Meanwhile, Ciara Crawford's ROW1 seat envisages an airplane seat where the wheelchair gets fitted seamlessly into the row, allowing for a more accessible airplane experience.

It's not just passengers whose needs are being considered, however; Collins Aerospace has proposed its Zero G Attendant Seat -- pitched as a high comfort seat for cabin crew. The seat stows and folds down for take off and landing, but can also be moved into more comfortable, reclined positions for off-duty flight attendants, who're ready to unwind on a long-haul flight.

This includes airplane seats with optional pre-programmed recline preferences as well as overhead luggage cabins lighting up green or red, depending on whether they're full.

Airbus reckons this is what passengers want from their inflight experience -- with Ingo Wuggetzer, VP marketing at Airbus, telling CNN Travel back in October 2019, that "what you experience on ground, you continue to experience on board of an aircraft."

German company AERQ also proposes using technology in an innovative way, allowing the cabin class dividers to double up as an OLED information screen, while Moment's "Flymingo Next" concept is designed to help crew members do their jobs efficiently.

As airlines face increasingly tough scrutiny over their commitment to sustainability, some of the Crystal Cabin nominees seek to tackle the eco-question.

PriestmanGoode submitted a meal tray called Zero, aiming to reduce the amount of weight and plastic waste created through meal service on flights.

Instead of disposable material, Zero is composed of either edible, biodegradable and/or commercially compostable materials.

On a similar theme, Diehl Aviation proposes a "Greywater Reuse Unit" which uses water from handwashing in the basin to flush the toilet -- the company suggests this will save 550 tonnes of CO2 per year for a single Boeing 787 aircraft.

Stay tuned to see which designs are crowned as winners on March 31.