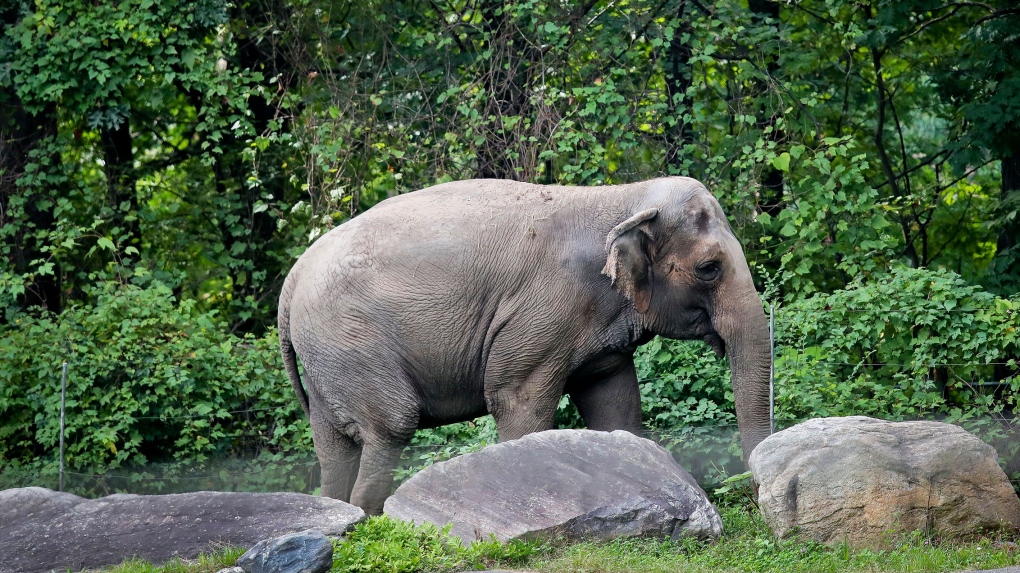 New York's highest court is set to determine whether Happy, a 47-year-old Asian elephant living at the Bronx Zoo, is being unlawfully imprisoned. (Bebeto Matthews/AP/FILE/CNN)

New York's highest court is set to determine whether Happy, a 47-year-old Asian elephant living at the Bronx Zoo, is being unlawfully imprisoned.

Nonhuman Rights Project (NhRP), a non-profit civil rights organization advocating for the legal personhood of great apes, elephants, dolphins and whales, filed its first petition against the zoo in 2018 "demanding recognition of Happy's legal personhood and fundamental right to bodily liberty and her release to an elephant sanctuary."

On Wednesday, the New York Court of Appeals heard arguments on both sides for Happy's release from the zoo. The court will likely issue a decision in the next four to six weeks, representatives of both the NhRP and Bronx Zoo told CNN.

The NhRP's legal argument revolves around the idea of habeas corpus, which protects against unlawful imprisonment. They argue that at the Bronx Zoo, Happy is kept in the equivalent of solitary confinement, which they say is particularly cruel given that elephants are highly social creatures roaming huge swaths of territory in the wild.

Happy, born in the wild in 1971, is one of two Asian elephants currently kept at the zoo, which are kept in separate but adjacent enclosures and are able to smell, see, and touch each other with their trunks through the fence. The organization is pushing for Happy to be moved to an elephant sanctuary, where they say she would have more space, like she would in the wild, and have social contact with other elephants.

"Holding [elephants] captive and confined prevents them from engaging in normal, autonomous behavior and can result in the development of arthritis, osteoarthritis, osteomyelitis, boredom and stereotypical behavior," elephant researcher Joyce Poole said in the organization's petition. "Held in isolation elephants become bored, depressed, aggressive, catatonic and fail to thrive."

The NhRP has called for Happy to be released to either the The Elephant Sanctuary in Tennessee or the Performing Animal Welfare Society sanctuary in California. Neither group is affiliated with the NhRP.

But the zoo argued to the contrary in their response. Happy has contact with another elephant and is cared for "by well-trained large animal veterinarians and by animal keepers who treat Happy with respect and kindness." They emphasize the zoo is certified and Happy, like all the zoo's animal residents, is protected by the Animal Welfare Act.

Moreover, Happy and the other animals on whose behalf the NhRP has sued, did not ask for the NhRP's legal representation, the Bronx Zoo says. And she doesn't need it.

The NhRP's "concern is winning a legal argument, not what is best for Happy," wrote the zoo in a public statement. "NRP is using Happy the same way they have used animals in other cases in their effort to upend centuries of habeas corpus law and impose their own world view that animals should not be in zoos."

And the case also has broader legal implications, the zoo argues. Habeas corpus has never been applied to nonhuman animals in New York, says the zoo, and doing so would open the door to legal chaos and add greater strain on the state's court systems.

"Changing this most fundamental of legal concepts has implications not just for zoos, but for pet owners, farmers, academic and hospital-based researchers and, most critically, every human who might seek or need access to the judicial system," the zoo wrote.

But Miller, one of NhRP's lawyers, says the group is pushing for a much more narrow ruling. Currently, she said, the legal world has "no room for distinction between elephant and caterpillar. Right now, Happy has the same rights as an ant."

Miller said Happy "is more like a human for the purpose of right to bodily liberty," noting the ruling wouldn't necessarily open the floodgates to other animals like dogs or livestock gaining human rights. According to the NhRP, elephants "share numerous complex cognitive abilities with humans, such as self-awareness, empathy, awareness of death, intentional communication, learning, memory, and categorization abilities," which makes them uniquely deserving of the right to habeas corpus.

Happy specifically has been used as an exemplar of elephants' intelligence: A 2006 study on animal self-awareness found Happy was able to recognize herself in a mirror, in a first for her species.

The case also builds on the legal history of habeas corpus. Historically, habeas corpus was used to free enslaved people in England and the United States, even during times when slaves did not have legal personhood. So, the organization argues, there is precedent for using habeas corpus to grant freedom to those without legal personhood, like elephants.

Just last year, the United Kingdom passed a bill formally recognizing animals as "sentient beings," part of an animal welfare package that also included bills banning most live animal exports and the import of hunting trophies. And habeas corpus was used in 2016 to free a chimpanzee named Cecilia in Argentina from a zoo and relocate her to a sanctuary in Brazil, the NhRP says.

But similar legal efforts in the US have failed. In 2017, a New York appeals court denied habeas corpus relief for Tommy the chimpanzee, another of the NhRP's "clients." The court determined despite their intelligence, chimpanzees are not able to bear legal duties and such animal rights issues were better suited for the legislative process than a lawsuit. More than 20 judges have ruled against Happy's case and similar cases, the zoo says.

"At the Bronx Zoo, we are focused on what is best for Happy, not in general terms, but as an individual with a unique and distinct personality," the zoo said in its statement.