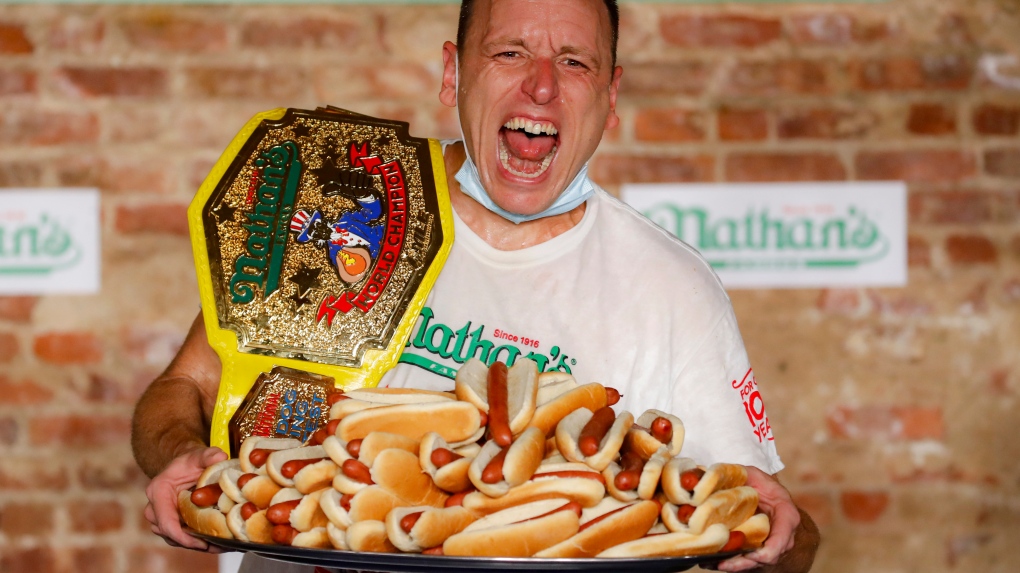 TORONTO -- Competitive eaters are nearing the human limit for the number of hot dogs that can be consumed in 10 minutes, according to a new study.

Using sports science theory and mathematical modelling to project trends in performance, the new U.S. study found that the eating threshold for humans is around 83 hot dogs.

The study, published Tuesday in the journal Biology Letters, concluded that 832 grams or 83 hot dogs is the maximum amount for a professional eater to consume while the average person is only able to eat about 10 hot dogs in 10 minutes.

The study reported that it is unlikely anyone would be able to eat more than 83.

"Though often perceived as an entertaining spectacle of gluttony, nearly four decades of data from the event provide insight into the limits of human gut capacity," the study said.

While the average human would run into a stomach capacity issue after consuming so many hot dogs, the study reported that competitive eaters specifically train to expand their stomachs.

Eating so many hot dogs – the current record of 75 hot dogs is roughly equivalent to 21,000 calories -- would "likely alter normal, healthy gastrointestinal function," the study said.

While some may think of competitive eaters as the personification of gluttony, the study found that their physiology and digestive systems are unique.

According to the study, the early winners of the Nathan's contest engaged in "binge-eating" and topped out at between 10 and 15 hot dogs in the 10-minute period.

However, the participation of Japanese extreme eaters such as Takeru Kobayashi in the 1990s started a slow and steady rise in how much elite contestants could eat. According to the study, competitive eating was no longer just about appetite, but instead, competitors were training to eat a lot in a short time.

The study found that competitive eaters are able to eat such large amounts of food because they train their bodies to do so by ingesting a large amount of liquids or gels to expand the stomach without processing the calories.

Chestnut, for example, told ESPN in a documentary last year that his training regime lasts for the three months leading up to the annual competition and includes weekly practice competitions, a controlled diet and yoga and breathing exercises to help with his mental focus.

The study noted that the hot dog composition and size has remained unchanged at Nathan’s Famous throughout its 104-year history, allowing for sustainable comparisons between competitors over the years.

The study also compared how much humans and carnivores who live on land can eat, finding that that the achievements of human speed eaters are impressive even by comparison with other species.

According to the study’s findings, humans are able to eat faster than bears or coyotes, but slower than grey wolves.

"In summary, data from hot dog eating competitions suggest that there is stunning plasticity in gut capacity," the study said.

While the human limit for hot dog consumption is 83, the study warns amateur eaters not to try to test it for themselves.

The study said the average person could suffer serious health consequences while trying to ingest such a large amount of food including choking or rupturing their stomach.