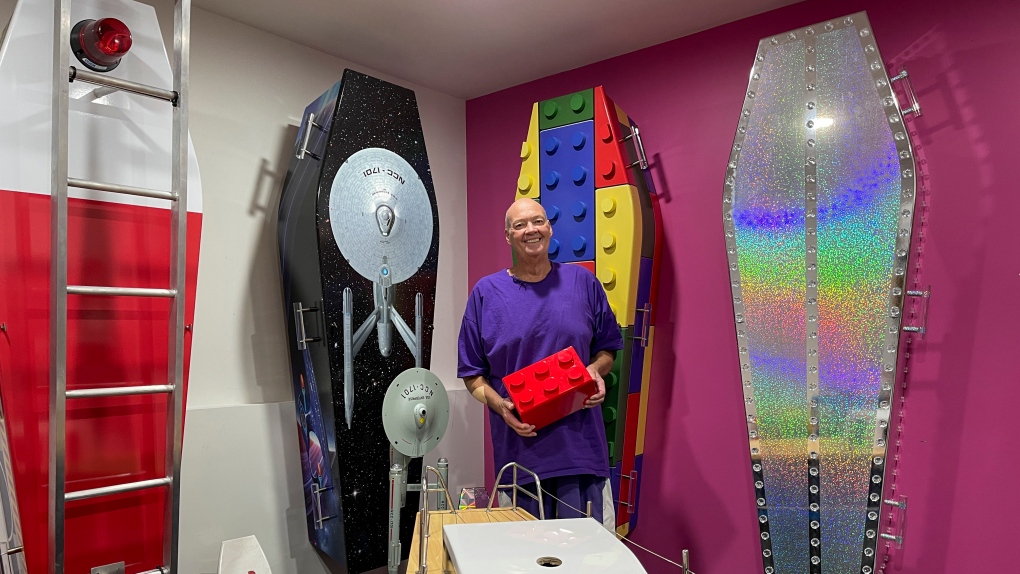 WELLINGTON, NEW ZEALAND -- When the pallbearers brought Phil McLean's coffin into the chapel, there were gasps before a wave of laughter rippled through the hundreds of mourners.

The coffin was a giant cream donut.

"It overshadowed the sadness and the hard times in the last few weeks," said his widow, Debra. "The final memory in everyone's mind was of that donut, and Phil's sense of humour."

Other creations by Hall include a sailboat, a firetruck, a chocolate bar and Lego blocks. There have been glittering coffins covered in fake jewels, a casket inspired by the movie "The Matrix," and plenty of coffins depicting people's favourite beaches and holiday spots.

"There are people who are happy with a brown mahogany box and that's great," said Hall. "But if they want to shout it out, I'm here to do it for them."

The idea first came to Hall about 15 years ago when he was writing a will and contemplating his own death.

"How do I want to go out?" he thought to himself, deciding it wouldn't be like everyone else. "So I put in my will that I want a red box with flames on it."

Six months later, Hall, whose other business is a signage and graphics company, decided to get serious. He approached a few funeral directors who looked at him with interest and skepticism. But over time, the idea took hold.

Hall begins with special-made blank coffins and uses fiberboard and plywood to add details. A latex digital printer is used for the designs. Some orders are particularly complex, like the sailboat, which included a keel and rudder, cabin, sails, even metal railings and pulleys.

Hall said the tone of funerals has changed markedly over recent years.

"People now think it's a celebration of life rather than a mourning of death," he said. And they've been willing to throw out stuffy conventions in favour of getting something unique.

Debra McLean said she and her late husband, who was 68 when he died in February, used to tour the country in their motorhome and Phil loved comparing cream donuts in every small town, considering himself something of a connoisseur.

He considered a good donut one that was crunchy on the outside, airy in the middle, and definitely made with fresh cream.

After Phil was diagnosed with bowel cancer, he had time to think about his funeral and, along with his wife and cousin, came up with the idea for the donut coffin. Debra said they even had 150 donuts delivered to the funeral in Tauranga from Phil's favourite bakery in Whitianga, more than 160 kilometres (100 miles) away.

Hall said his coffins are biodegradable and are usually buried or cremated along with the deceased. The only one he's ever gotten back is his cousin's, he said, because he used polystyrene and shaping foam, which is not environmentally friendly.

Phil was switched to a plain coffin for his cremation and Hall said he'll keep the donut coffin forever. For now, it remains in the back of his white 1991 Cadillac hearse.

As for his own funeral? Hall said he's changed his mind about those red flames. He's emailed his kids saying he wants to be buried in a clear coffin wearing nothing but a leopard-pattern G-string.

"The kids say they're not going," he says with a laugh.