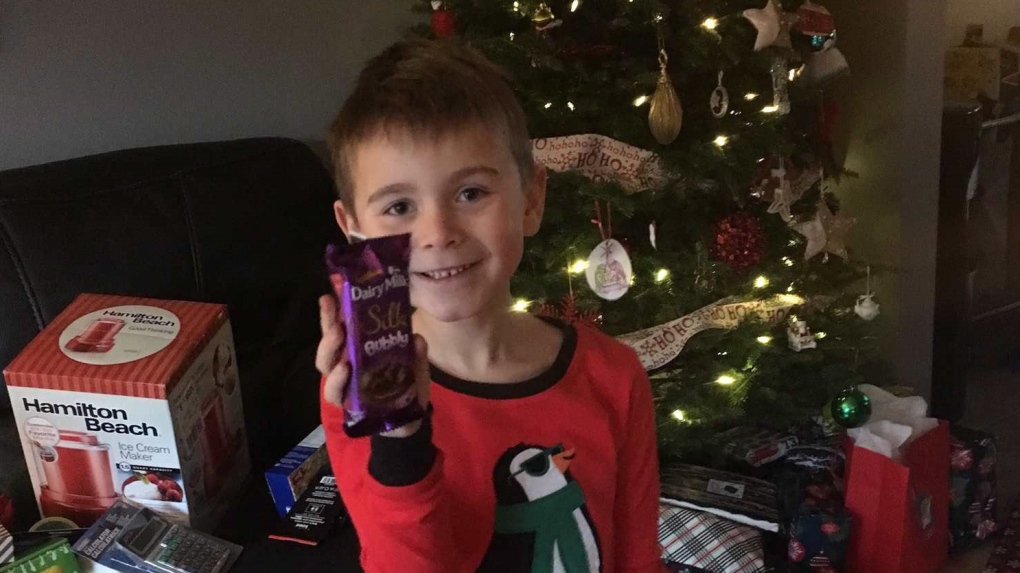 Santa's helpers came through this year for a little boy who only wanted one thing for Christmas: a chocolate bar that can't be found in North America. Isaac Comstock, 7, is shown in a handout photo holding a Cadbury Dairy Milk Silk Bubbly bar, which is only available in India and South Africa. THE CANADIAN PRESS/HO

HALIFAX -- Santa's helpers came through this year for a little boy who only wanted one thing for Christmas: a chocolate bar his mom couldn't find in Canada.

"Usually his interests last for about six months and then he moves onto something new, but this time it's chocolate," said Comstock on Wednesday.

"First it was Hershey's, then he got an interest in Cadbury."

While Cadbury -- a subsidiary of Mondelez International -- sells aerated chocolate bars in Canada, Comstock said the company's "Silk" brand, which has softer chocolate than its North American products, is difficult to find outside of India and South Africa.

Comstock spent the weeks leading up to Christmas scouring the international aisles of grocery stores and attempting to order the chocolate online, she said, but she couldn't find any that could be shipped to her Halifax-area home.

So she took to social media and posted on a local buy-and-sell Facebook group asking if anyone had any ideas.

Shortly after, a stranger sent her a message saying her mother was flying from Hyderabad, India, to Halifax on Christmas Eve, and said she could ask her to bring along some of the chocolate bars.

"Sure enough, she contacted me and said her mother went to the corner store around the corner from her house in India, and found this chocolate bar and she picked up four of them," said Comstock.

Comstock's father-in-law picked up the chocolate bars from the Halifax airport in the wee hours of Christmas morning, just in time to wrap them up and get them to Isaac for Christmas.

Isaac's reaction upon unwrapping the bars was "priceless," Comstock said.

"When he opened it up, I could just see the joy in his eyes and how much it meant to him to have those chocolate bars," she said. "It definitely made my Christmas, that's for sure."

She added that three of the four bars have been eaten -- with Isaac sharing pieces of them with his family members -- and they plan to save the wrappers and keep the final bar in its package.

"I kinda want to hide it, so we can have this memory forever," said Comstock.

The woman who arranged for her mother to bring over the chocolate said she was happy to have a part in making the little boy's Christmas.

"I didn't do anything out of the way or do anything that would be difficult for me or her," said Geervani Gangaraju, who moved to Halifax from India four years ago. "I'm a mom myself and I know how moms feel about their kids."

On Christmas Day, Comstock sent Gangaraju a video of Isaac ripping the wrapping paper off the bars, emitting high-pitched shrieks of excitement, and jumping up and down with joy.

"That made my day," laughed Gangaraju.

"The impact it had on that family makes me feel glad that I did that, and if more people can do that -- just small little acts that are not huge hassles -- we'll live in a much better place."

Comstock, meanwhile, said Isaac has now taken an interest in India, and dreams of travelling there someday.

"He's becoming interested in geography too, so he wants to explore the world and maybe one day he will, and find all kinds of different chocolate," she said.