Chanel delves into founder's orphanage past in couture show 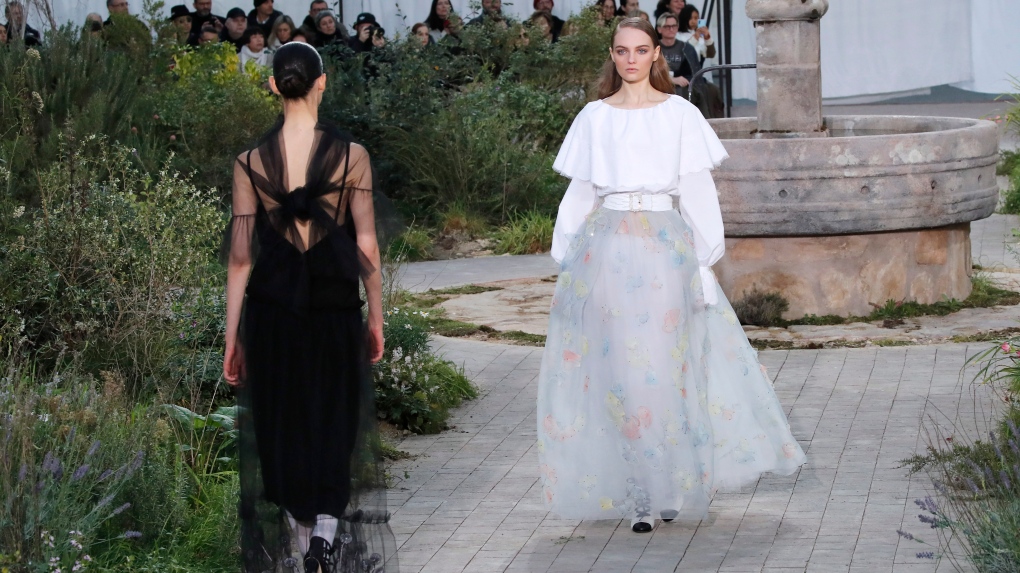 PARIS -- A humble stone fountain, overgrown shrubs and flowers, and white sheets drying on a line met Pharrell Williams and other curious guests at the Chanel show inside the Grand Palais.

The set recreated the landscape house founder Gabrielle "Coco" Chanel viewed as a child after her mother died and her father sent her away to an abbey orphanage.

If such a lowly -- and sad -- setting seemed like an unusual choice to showcase high-priced and normally joyous couture, it was an intentional move by designer Virginie Viard to demonstrate how Chanel mixed high and low in her fashion.

Here are some highlights from the second day of Paris Fashion Week haute couture shows for spring-summer 2020.

Chanel, Viard discovered, had been profoundly inspired in all her designs by the ancient Cistercian Abbey of Aubazine, in the French region of Correze -- with its flowers, uniforms and stained-glass artistry.

The theme made for a more haunting collection than normal -- a mood emphasized by loud, spooky music and models that slowly crisscrossed the courtyard like they were in a trance.

A take on a convent schoolgirl uniform opened the show as a signature Chanel tweed skirt-suit. It was cut sharply, with a round ecclesiastical white collar and baggy white preppy ankle socks. Mosaic patterns in panels evoking stained glass appeared on an equally strict jacket in pastel blue and sand. Apart from the occasional flash of colour, most of the designs came in black and white.

"What interested me in this (abbey) was the paradox between the sophistication of haute couture and the simplicity of this place," Viard said. "The strict suits of the pupils rub shoulders with structured dresses of an ethereal finesse."

Viard has less humour and a stricter esthetic take than the flamboyant Karl Lagerfeld, her predecessor who died last year. And this more austere theme gave the French designer a platform to design more naturally with her own voice.

They played dramatic classical music to accompany spring's equally dramatic couture -- an accomplished series of varied designs that made it seem as if designer Clare Waight Keller can't put a foot wrong.

The clothes spoke for themselves, without the need for cultural references, through deft plays of proportion.

A long charcoal tuxedo coat had a magnificent shape, with a truncated full skirt billowing out unexpectedly at knee level in a clever reinterpretation of a known silhouette.

Vividly colored silk ruffles didn't just appear as details on gowns, but Keller used them to construct the structure and silhouette of trapeze-shaped garments that teemed like dense, oversize petals.

Burlesque superstar Dita Von Teese opened the show for Alexis Mabille in a black tuxedo with sensual decollete that dripped down the leg with brooding black sequins.

The French couturier this season used Von Teese -- and her styles -- as the touchstone for a collection that explored corsetry, lingerie and seductive undressing.

A white satin bustier was covered gently by a see-through lace chemise. A white floor-length gown had a bold dropped shoulder in which the segments seemed to fall off the bust, as if the model were in the process of undressing.

Mabille also used his signature bow theme to produce a gargantuan abstract neck bow whose proportions drowned the model. It was highly inventive.

For Armani, couture is about celebrities and razzmatazz, and Tuesday was no exception as actresses Reese Witherspoon and Juliette Binoche held court.

The Asian-themed designs, though beautifully constructed, were secondary to that, sadly, and tended toward the repetitive.

A structured white silk tuxedo in a crossover design opened the show. The model wore a stiff black wig, a styling feature that appeared throughout the show.

The signature tuxedo led to a terracotta obi belt on hot pink loose pants and a V-neck tuxedo in imperial blue.