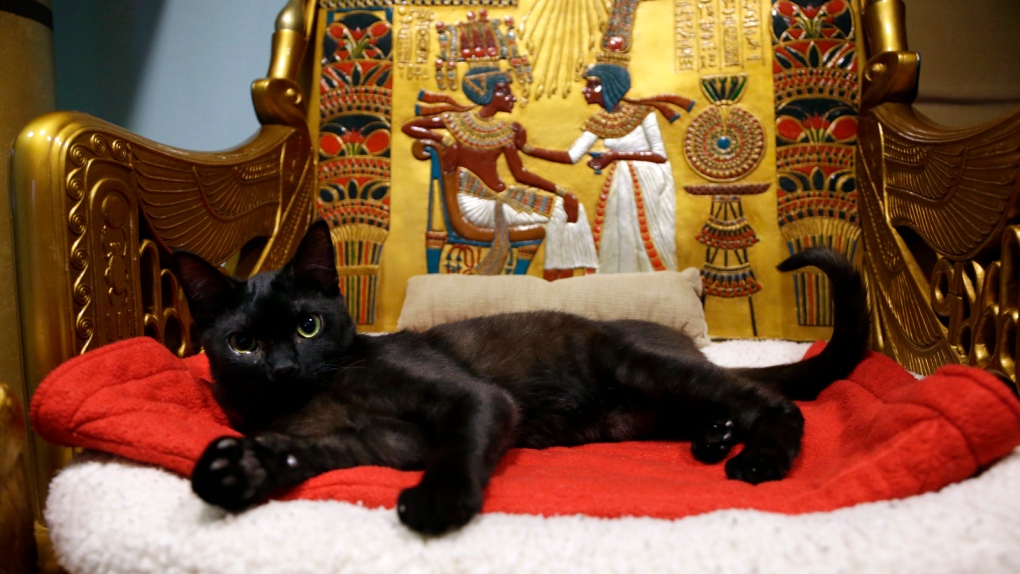 A cat rests on the throne bed in the King Tut-theme cat playroom at the Oregon Humane Society in Portland, Ore.,In this Thursday, Dec. 18, 2014. (AP / Don Ryan)

PORTLAND, Ore. -- Cats these days aren't associated with deities like they were in ancient Egypt, but the Internet has gotten them a little closer.

We adore Nora the piano-playing cat. We chuckle as a comical feline named Maru leaps into cardboard boxes. We revel in Grumpy Cat's permanently sour expression. And with millions watching videos of other kitties getting tongue baths from horses and playing peekaboo with their owners, cats have become online stars.

For feline fans, it's a sea change. In the affections of Americans, cats often get short shrift compared with dogs. Some see cats as aloof, poor companions and indifferent to attention that dogs enjoy.

But with cats' celebrity expanding, experts say cyberspace is aiding their plight.

"Social media has put pets front and centre," said Christie Keith, social media consultant for Maddie's Fund, a California-based foundation that works to save pets' lives. Social media, she said, "is revolutionizing how we help animals."

The Internet has created a vast audience of potential adopters. To save pets' lives, animal welfare organizations are reaching out to an audience addicted to cat videos. Shelters use social media to promote everything from adoption campaigns to free vaccinations, spaying and neutering.

Although there are no comprehensive nationwide statistics, recent studies of targeted communities and available data indicate increases in animal shelters releasing cats to owners or agencies such as rescues that guarantee adoption.

In one of the studies, conducted by the American Society for the Prevention of Cruelty to Animals, shelters and rescue organizations in six areas from Florida to Washington state supplied data from 2007 to 2011. Overall, the rates for dogs and cats released to people or agencies rose from 41 per cent to 65 per cent. Cats showed a whopping 111 per cent boost.

It's difficult to pinpoint how much of this good news stems from the Internet, but many online campaigns have seen successes.

A year ago, just before Christmas, the Dumb Friends League in Denver posted a photo and story on Facebook of an 11-year-old cat that had been in its shelter for nearly eight months. Older cats like Ripley are often overlooked by potential adopters.

For her online appearance, Ripley donned a tiny Santa suit. The posting got hundreds of shares and "likes" and netted her a new home, said Megan Rees, spokeswoman for the organization.

The Oregon Humane Society also turns to Facebook to help get pets adopted over the holidays. The organization's page, with the headline "Home For The Holidays," shows four homeless animals wearing Santa hats: a cat, a dog, a rabbit and a parrot.

On average, kittens featured on the organization's website find new homes within half a day of appearing online. It takes about seven days for adult cats after they are posted online.

Despite the successes, too many cats and other pets still get dumped at shelters because the owner doesn't like the animal's personality or can't afford to keep it.

But as viewers keep returning to videos of Nora pawing the ivories and Maru running and sliding into cardboard boxes, they are strengthening their bond with the feline species.

"There's something quite fascinating and fun about cat videos," said Dr. Emily Weiss, senior director of research and development for the ASPCA. "What's more compelling than some random compilation of cats doing stuff like knocking things over?"