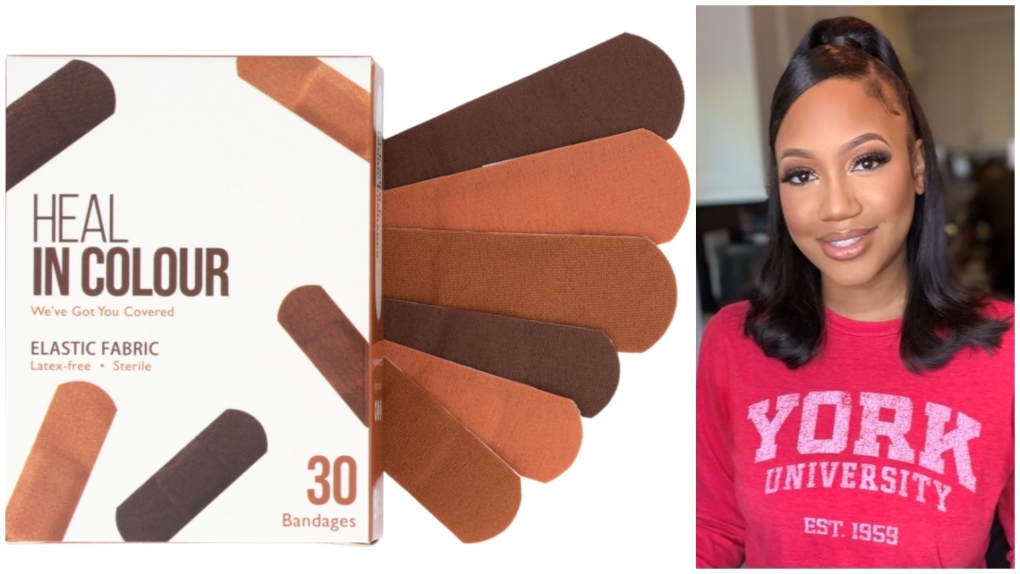 Disappointed with a lack of choice, a Black Toronto entrepreneur has created a new startup which sells adhesive bandages which better match the skin tone of Black and brown-skinned Canadians. (Courtesy of Tianna McFarlane, Heal In Colour)

TORONTO -- Disappointed with a lack of choice, a Toronto entrepreneur created a new startup selling adhesive bandages which better match the skin tone of Black and brown-skinned Canadians.

“Our mission is to make black and brown bandages the norm,” Heal In Colour founder Tianna McFarlane told CTVNews.ca in a phone interview on Sunday, noting that her bandages come in two sizes and three shades (honey, almond and chestnut).

“I want Black and brown people to have the opportunity to feel confident in their skin as they heal. And get to have that exact match that doesn’t stand out as much as the lighter, white ones.”

The idea for her startup began while her skin was cut on vacation in 2019. She scoured a handful of stores but couldn’t find bandages which matched her black skin and “wouldn't stick out like a sore thumb.”

“What I saw on shelves when I went looking for bandages was white and more white,” she said.

McFarlane had to settle with whatever was there, but in that moment, she saw an opportunity.

So over the past two years, McFarlane has been coming up with the look for her bandages and working out manufacturing deals. And last month, she officially launched her company and its website.

And because of the pandemic, McFarlane, an administrative assistant at York University, was able to focus and “really got to put the pedal to the metal.”

'I WANT TO BE INSPIRING'

Since launching, McFarlane said she’s sold nearly 300 boxes of Heal In Colour bandages and generated just under $2,500 in sales. She said orders have come in from a wide swath of Canadians, including doctors, teachers, coaches, and personal trainers.

The marches to end police brutality and anti-Black racism last year led to multiple companies pledging to change hiring practices and rename long-held problematic names. For its part, Band-Aid launched bandages for black and brown skin in the U.S., a move that came 99 years into the company’s history.

But McFarlane couldn’t help but feel the action was performative and asked why Band-Aid and its parent company, Johnson & Johnson, had taken so long to do it.

“Why did they not want to cater to the Black and brown community for all these years?”

“We’re proud of the fact we were first to market in Canada with this unique product,” McFarlane said, noting that similar products are mostly based out of the U.S. “Our success is further proof that startups – in this case, one that is Black owned, and woman owned – can innovate rapidly and use diversity as a strength to reach new markets.”

She wants to see her brand become a household name and is currently in the process of getting her Heal In Colour line into chains such as Wal-Mart and Shoppers Drug Mart. Beginning this summer, they’ll be available in the York University bookstore.

“I just want to be inspiring and show other Black women that they can start something too from nothing.”