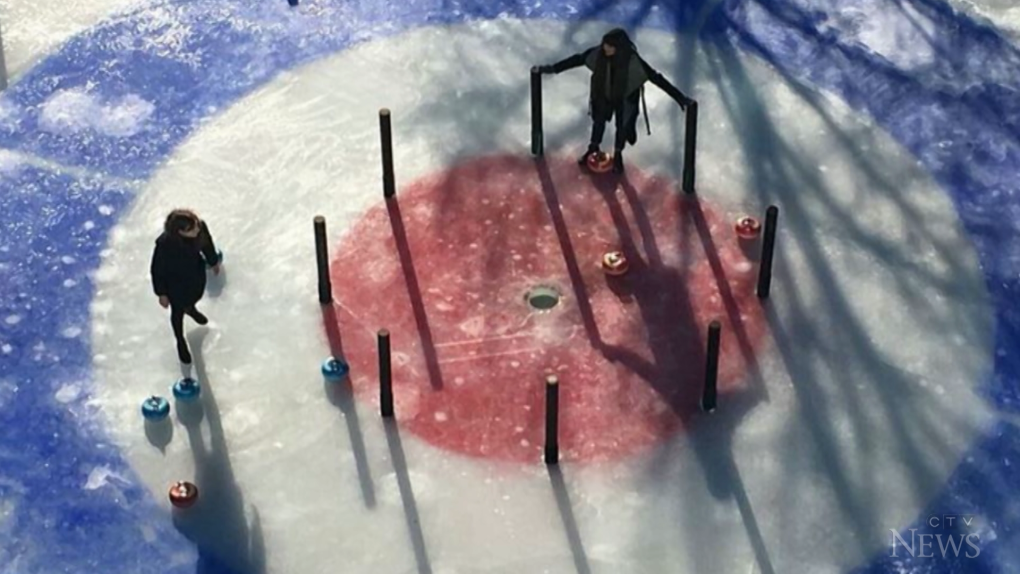 People play 'crokicurl' at The Forks in Winnipeg (CTV News)

TORONTO -- A popular Canadian winter game known as crokicurl is helping people get outside while adhering to public health protocols, making it one of the ideal outdoor activities within COVID-19 regulations.

The Canadian-made game is a hybrid of two classics: crokinole and curling. The game is a giant version of crokinole, played on an ice surface, at least 15 metres in diameter. Instead of wooden pieces, the activity uses curling stones to play the game.

“It’s just nice to get out and play a new game. It’s just something new,” said Dax Elsley, a crokicurl enthusiast.

The game was invented by Liz Wreford of Winnipeg’s Public City of Architecture in 2016. Since then, crokicurl rinks have appeared in different locations across the country. Saskatoon, Fredericton, and Swift Current all have seen the game boost in popularity.

In a classic crokicurl game, players take turns sliding curling stones to the centre of the ice where various regions are marked. Depending on where the stone lands, players are awarded different points.

The team that gets it closest to the centre wins. Lines are painted on the corkicurl rink and a Zamboni cleans the ice, similarly as to curling.

Similarly to curling, players are also able to knock the competitions’ rocks out of their way.

“I would say that there’s probably a renewed interest in it because it is something that people can play while being apart,” said Wreford.

A newly built outdoor crokicurl rink in downtown Toronto is a first of its kind, and it has also seen a boost in popularity during the winter months of the pandemic.

"The demand has been incredible. We've sold out almost every time slot until the end of February," said Sam Thumm, event manager at Stackt Market.

The game is appropriate for all ages and skillsets and with no experience necessary to play. It can be played by two to eight people at a time, while adhering to pandemic protocols.

“It doesn’t take a lot of skill to play, and it’s a lot of fun for all age categories,” said Elsley.