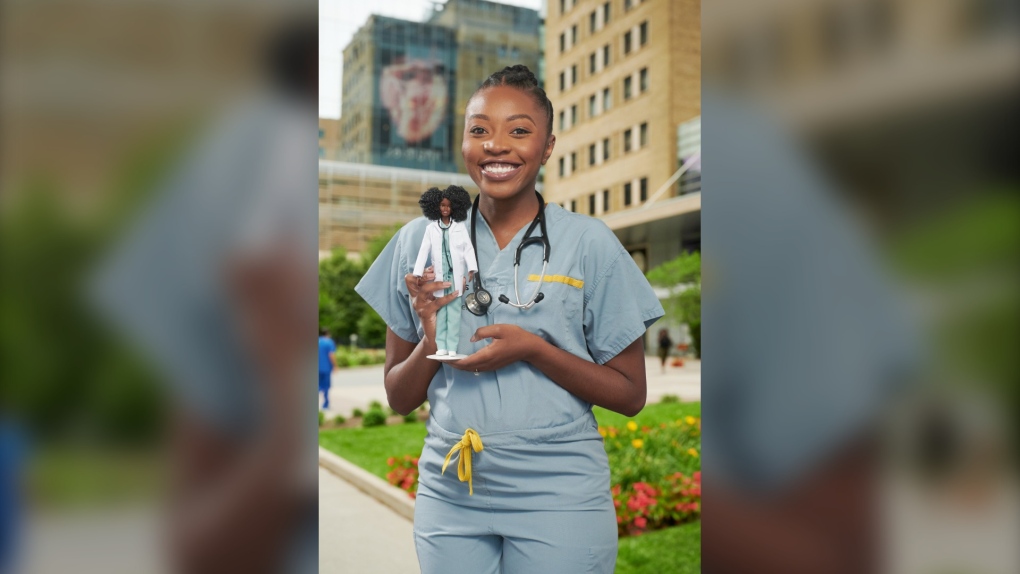 TORONTO -- Dr. Chika Stacy Oriuwa remembers dressing up her Barbies as doctors, poets and performers when she was a young girl, but none of the dolls looked quite like the woman she aspired to be.

Now, the Canadian physician, spoken word poet and advocate is not only living out her childhood dreams, but has a Barbie made in her image to show for it.

Oriuwa hopes the creation of a one-of-a-kind doll celebrating her success will show kids there aren't any limits on their play or their potential.

"What is even more beautiful about this opportunity is that the Barbie is a Black female doctor that is made in my image," said Oriuwa, a psychiatry resident at the University of Toronto.

"That really speaks to my core value and my core belief that you can truly become anything and you can truly occupy any space and thrive."

Oriuwa is one of six women who inspired Mattel's special collection of Barbies honouring health workers on the front lines of the COVID-19 crisis.

Also among the female scientists being celebrated are U.K. vaccinologist Sarah Gilbert, who co-developed the Oxford-AstraZeneca jab, and Brazilian biomedical researcher Dr. Jaqueline Goes de Jesus, who is credited with leading the sequencing of the genome of a COVID-19 variant in Brazil.

Only one doll was made for each of the real-life "role models" and will not be available for sale, a Mattel spokeswoman said.

The toymaker recognized Oriuwa for her advocacy against systemic racism in health care.

The 27-year-old has spoken openly about the discrimination she faced as the only Black student in her class during her first year in medical school in 2016, and helped spearhead efforts to diversify the program.

She became the first Black woman to be selected as sole valedictorian for University of Toronto's faculty of medicine upon graduation last year.

From a young age, Oriuwa said she strained against the "subconscious messaging" that she didn't fit the mould to work in the medical field.

Even as she played out her fantasies of adulthood with Barbies, Oriuwa said the brand didn't offer many Black dolls, particularly ones with her skin tone and Afro-textured hair.

"Not only did I not necessarily have a Barbie that looked like myself in the field I wanted to pursue, but I actually didn't know any Black female doctors at all until much later on in life," she said.

"It would have been so pivotal for me to have had a Barbie that can really help to solidify more of my dreams and letting me know that it really is something that is tangible."

Oriuwa worked with the Barbie team to design a doll that depicts her features accurately, complete with medical accessories including a white coat and a stethoscope.

"A part of this is also changing the narrative of what a doctor looks like," she said.

"I really wanted to be able to send that messaging back to the younger generation of girls to inspire them and let them know that truly any one of them can occupy this field or any field that they aspire towards."

This report by The Canadian Press was first published Aug. 4, 2021.

WHO calls for pause on booster shots to vaccinate poorer nations

Feds say 82,000-plus doses of AstraZeneca vaccine to be sent to Trinidad and Tobago

What should I know about the delta variant?