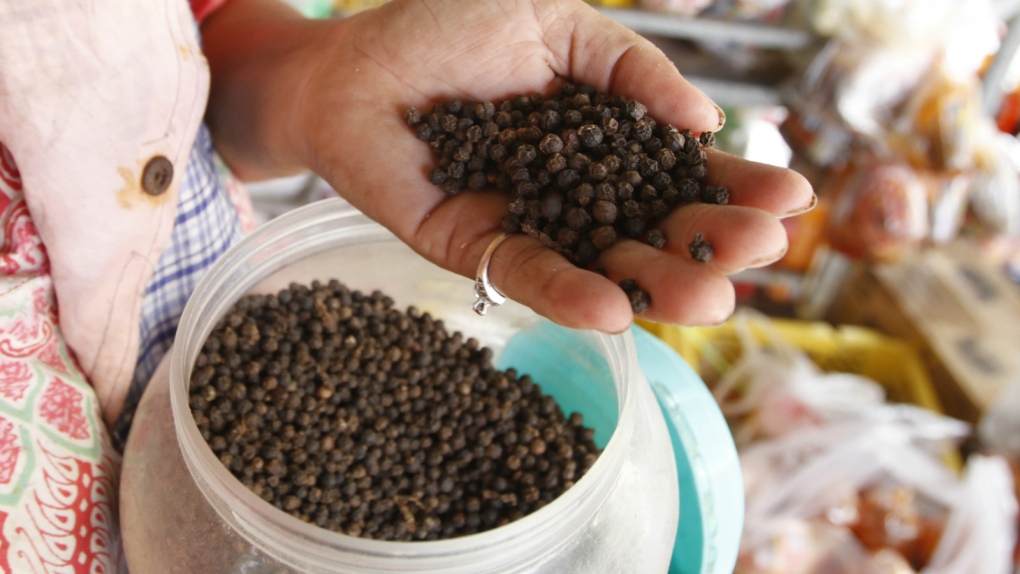 A vendor holds a handful of Kampot pepper before selling at a market in Phnom Penh, Cambodia on Tuesday, March 1, 2016. (AP / Heng Sinith)

PHNOM PENH, Cambodia - Cambodia's Kampot pepper, a go-to spice for chefs around the world, has joined an elite group of gourmet food items whose names are protected by the European Union, joining products such as Gruyere cheese from France and Parma ham from Italy.

The coveted designation, known as Protected Geographical Indication, or PGI, works like a trademark protection that certifies the origin of regional foods. It means that any product sold in EU countries calling itself "Kampot pepper" must come from a designated region in southern Cambodia that includes Kampot and neighbouring Kep province.

The recognition was awarded to Kampot pepper on Feb. 18, making it the first Cambodian product to receive the label, the EU office in Cambodia said in a statement this week.

The peppercorns, which come in white, red and black, are described by gourmet chefs as having a complex flavour with floral overtones. Cambodian farmers from the seaside region on the Gulf of Thailand say the area's microclimate and mineral-rich soil give the pepper its unique taste.

Like so many industries in Cambodia, Kampot pepper's production collapsed in the 1970s during the Khmer Rouge era, when an estimated 1.7 million people died at the hands of the brutal regime and the country's farmland was largely replaced by rice paddies.

The pepper industry's revival came in the 1990s, after peace was restored in Cambodia following the Khmer Rouge's 1975-79 reign of terror and years of subsequent civil war.

In 2010, Cambodia's Commerce Ministry took a first step toward protecting Kampot pepper by giving it a domestically issued geographical indication status. The government applied to the EU in 2014 to expand the status to the European bloc.

"It is the first Cambodian product to receive this status in the EU, a single market of more than 500 million consumers and 28 countries," Alain Vandersmissen, charge d'affaires of the EU's delegation to Cambodia, said in an email.

"From now on, (Kampot pepper) will benefit from a very high level of protection on the EU market," he said.

The pepper is also known in Khmer as Mrech Kampot and in French as Poivre de Kampot.

Nguon Lay, president of the Kampot Pepper Promotion Association, sees the PGI designation as a seal of quality that will boost sales of the spice, which is currently grown by 342 families on 184 hectares (455 acres) of land in Kampot and tiny Kep province.

In 2015, the region produced 60 tons of Kampot pepper, of which 70 per cent was exported, mostly to the EU, the United States and Japan.

"We are delighted that our production has finally been recognized by the world's biggest market, the EU," Nguon Lay said. "The status will help improve our living standard as more and more customers become impressed with our Kampot pepper."