Calling all Canuck foodies: Here's a list of 100 per cent Canadian ingredients 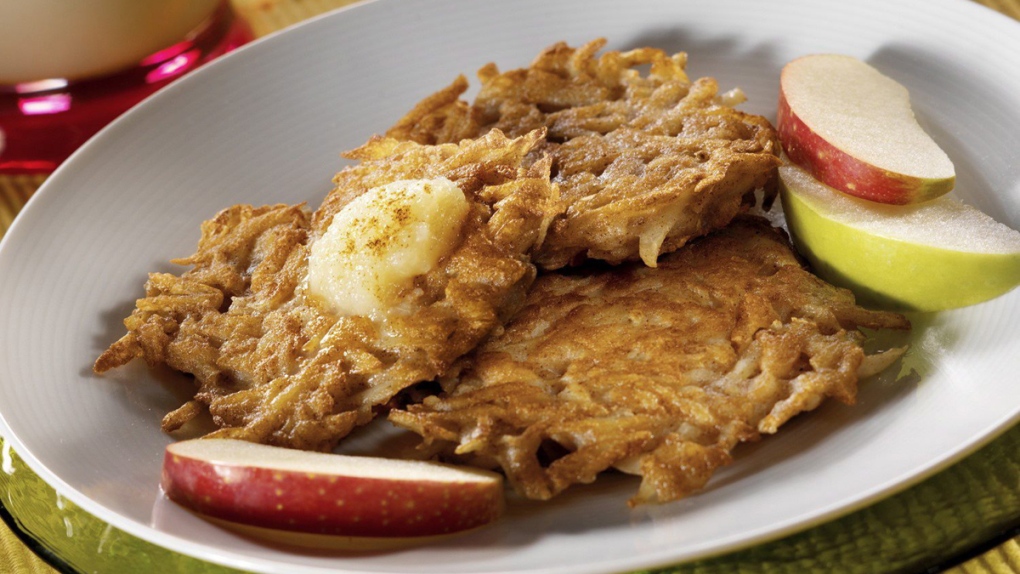 Yukon Gold Potato Pancakes are a treat any time of the day. (THE CANADIAN PRESS / PEI Potatoes)

TORONTO -- Anita Stewart wants people to prepare Canadian food -- it keeps the country's producers and processors in business and defines our culinary identity -- and decided to lend a helping hand.

She has compiled a list of 100 per cent Canadian ingredients that can be used to set the table, especially on Food Day Canada, an annual culinary party spearheaded by Stewart since 2003. This year's edition takes place Saturday.

Stewart says the event is a chance for Canadians to celebrate and support the country's farmers, fishers, chefs, researchers and home cooks. She expects some 250 restaurants across the country to mark the occasion with special menus.

Her shopping list has 149 items on it, to mark one year till Canada's sesquicentennial.

"If I tell people to cook like a Canadian I have to tell them how to shop like a Canadian and it seemed to me it was becoming more and more difficult to figure out exactly what is on the shelves and farmers markets," says Stewart, who is the food laureate at the University of Guelph and a member of the Order of Canada for promoting Canada's culinary identity.

Part of the difficulty is the way food is labelled.

According to the Canadian Food Inspection Agency, a "Product of Canada" label means that all, or nearly all, of the food, processing and labour used to make the food is Canadian. The ingredients were grown or raised by Canadian farmers and prepared and packaged by Canadian food companies.

But when it comes to "Made in Canada," it can get confusing. "Made in Canada from domestic and imported ingredients" on a food label means a Canadian company was involved in some of the preparation of the food and it contains some food grown by Canadian farmers and some that's been imported.

For example, Stewart was making black currant jam with water from her tap, fruit from a nearby garden and sugar. But because the product contains more sugar than anything else, "legally I wouldn't be able to call it 'Made in Canada."'

However, Stewart has found sugar from Lantic Inc., of Taber, Alta., with the number 22 in front of the product code on the package, indicating it is Canadian sugar processed from sugar beets, Stewart says from Elora, Ont.

Stewart discovered she needs to render lard -- long her go-to fat for pastry -- or find a butcher who does it because there are no large Canadian commercial lard and shortening operations.

The process is "smelly," she says. "It's easy to do, but it's not my favourite thing."

She's developed a recipe for canola oil pastry, which she pats into a plate for a crumble-topped pie with apples and black raspberries. "And of course a good butter pastry is wonderful. It's the classic French way of doing pastry. Our butter is, of course, Canadian."

The blue cow logo on dairy products indicates they contain 100 per cent Canadian milk, and Stewart lists some ice cream and yogurt brands on her shopping list that comply.

Stewart acknowledges it might not be possible to find every item on her list -- ranging from vinegars to craft beers to lentils, flax, flour, quinoa, meat, seafood and nuts -- across the country.

"It's possibly a reason to travel too.... There is something to be said for the cachet of our cuisine, whether it's our caviar or Colville Bay (P.E.I.) oysters being found only in very specific areas of the country," she says.

"Well, good for us because it gives us a way of understanding the regionality of our food. You're not going to get corned caplin outside of Newfoundland -- and the caplin are rolling right now."