Bullied boy gains confidence as the 'Joker' in professional photoshoot 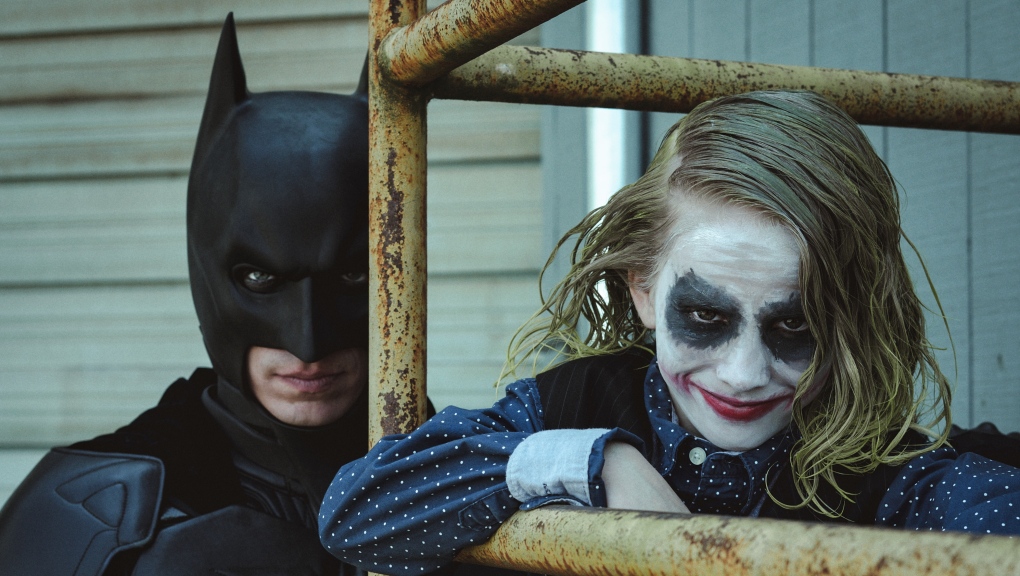 Race Young dressed up as his favourite comic book villain the Joker for a photoshoot in Portland, Ore. (Lance Reis)

An eight-year-old bullied boy from the state of Washington received a much-needed confidence boost thanks to the help of a portrait photographer who transformed him into his favourite comic-book character in a professional photoshoot.

Andrea Young said her son Race had been struggling at school for the past year-and-a-half.

“He was coming home having a hard time,” she told CTVNews.ca during a telephone interview from her home in Battleford, Wash. on Friday. “He didn’t want to go to the bathroom by himself. He was just really anxious about things and we just didn’t know why. We couldn’t get it out of him.”

Young said she and her husband thought their son might be getting bullied because he was tall for his age and he was allowing his hair to grow long.

The reason Race was growing out his curly hair was so he could look more like Heath Ledger’s Joker character in the 2008 Batman film “The Dark Knight” for an upcoming photoshoot.

Earlier that year, Young said she had reached out to Lance Reis, a Portland-based portrait and creative art photographer whom she had befriended on Instagram. She said she admired his photography, which included cinematic-themed shoots and cosplay characters.

“I had been following Lance’s work for quite some time and Race would sit next to me on the couch and he would look through his photos and he had seen a photoshoot he had done with Batman,” she recalled.

Knowing how much her son adored Batman and the Joker in particular, Young asked Reis if they would be able to meet up with him in Portland so her son could pose for a photo with his superhero idol or at the very least get an autograph.

Reis was more than happy to oblige.

“She said ‘Race is having a hard time, but it would mean the world to him if he could get a picture with Batman and Joker’ to which I said ‘That would be cool, but I think it would be cooler if we turned him into Joker and did an actual photoshoot with Batman,’” Reis said.

The photographer said he had been looking to do a special project free of charge for a bullied child because the issue was close to home for him.

“It’s very important to me to give back because I myself was bullied a lot when I was younger,” he said. “I have the ability to empower, not only adults, but children through photos, so it was a good cause and I was happy to do it.”

After more than a year of scheduling conflicts, Young, her husband, and Race were finally able to make the 40-minute drive to downtown Portland on Wednesday to meet Reis for the highly anticipated photoshoot.

Reis had arranged for a make-up artist and hairdresser to transform the young boy into his beloved superhero villain and invited his friend to join them in his Batman costume for the photos.

After two hours of make-up and hair styling, Race was unrecognizable in his new Joker getup.

“It was overwhelming. It was incredible to see his mood change and his eyes,” Young said.

Reis, too, noticed a stark change in the boy as soon as he began to snap photos.

Since he posted the photos on Facebook, Reis said he’s received an overwhelmingly positive response to them. Although he’s not sure if his photos will prevent Race from being bullied in the future, he said he hopes they will have an impact on his self-esteem.

“As someone who’s been bullied, I know how it will affect your confidence and just the way you feel,” he said. “I will say that I do believe the pictures will help him with his confidence and ego, which is really big at that age.”

Young said she’s already noticed a difference in her son’s mood in the few days since the photoshoot.

“He’s on cloud nine right now,” she said. “I’ve been showing him the comments and telling him what people are saying and showing him all the pictures and he just gets the biggest smile on his face. Now he wants to model. He wants to take acting lessons. He’s in awe.”