Bugs in the grocery aisle; Loblaw adds cricket powder to its PC line 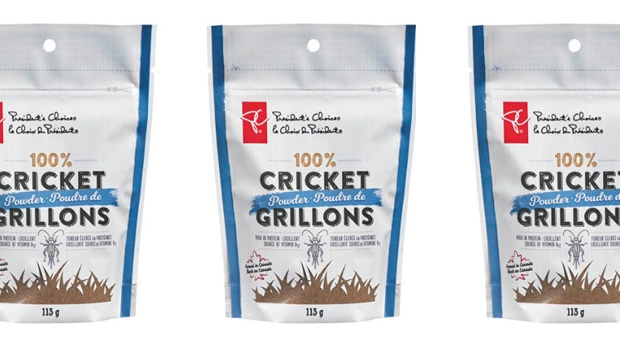 Canada's largest grocer believes Canadians are ready to cook with crickets and is bringing the alternative protein ingredient to grocery shelves under its President's Choice label.

"As a leader in the industry, we wanted to be among the first to bring cricket powder to Canadians in an easy and approachable manner."

Entomophagy, a name for the eating of insects, may be relatively new to Canadians. But around the world people consume more than 1,900 different species, according to the Food and Agriculture Organization of the United Nations. The most frequently consumed are beetles, caterpillars, bees, wasps and ants.

In Canada, insects sometimes appeared as ingredients on restaurant menu items. A Vancouver restaurant made headlines when it offered cricket pizza several years ago and the insect was centre stage at the 2017 summer Pacific National Exhibition fair where the ingredient could be found in burgers and fries.

A number of entrepreneurs have attempted to capitalize on the food trend, packing insects into both protein powders and bars.

The farm started in January 2014 and has grown from 464 square metres to 6,100, said co-founder Jarrod Goldin. There's plans for expanding further, with another 3,700 square metres soon to be built out, he said.

Entomo sells cricket and mealworm products, like protein powder and whole-roasted mealworms, under its own brand name on its website and at various grocery stores -- though no national chains, he said.

Cricket powder is really malleable, he said, and can be added to most anything people already eat.

Goldin sprinkles some on top of plain yogurt and berries for breakfast, for example. It can be baked into pizza crusts, added to pancake mix or put into a chili recipe.

The only limit is imagination, he said.

The taste varies based on concentration. A small amount won't add any flavour, Goldin said, otherwise "it has a very lovely, earthy, nutty, mushroomy kind of flavour."

The Loblaw deal has been in the works for years, Goldin said, and he's hopeful it's the first of many insect-protein products the national grocer will stock.

"President's Choice is actively working on additional products made with cricket powder," Loblaw's Thomas confirmed, adding an assortment of alternative plant-based protein products will be available in 2019.

It may not be the only large grocery chain to start selling insects.

"But we're always assessing food trends and might look to carry some of these products in the future."