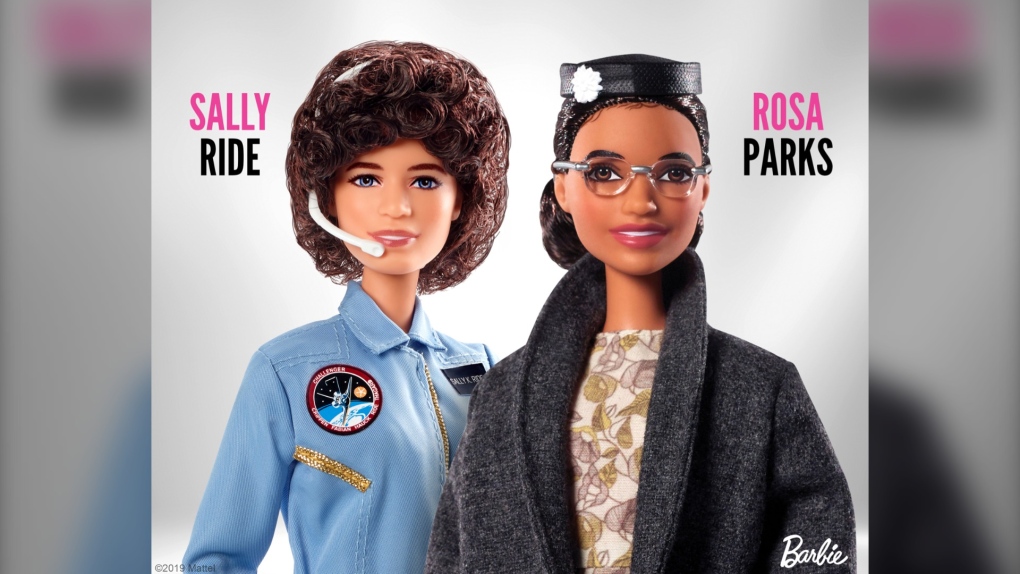 Sally Ride and Rosa Parks are two new historical figures to be immortalized in Barbie's "Inspiring Women" series. Their launch was announced this Monday. (Mattel)

Civil rights activist Rosa Parks and astronaut Sally Ride have joined a lineup of important figures in history to be immortalized in Barbie’s “Inspiring Women” series.

The company announced the launch of the two new dolls on Monday, coinciding with Women’s Equality Day.

“The Inspiring Women™ Series pays tribute to incredible heroines of their time; courageous women who took risks, changed rules and paved the way for generations of girls to dream bigger than ever before,” reads the description under the new dolls on Barbie’s website.

Rosa Parks is known for her important role in the civil rights movement in the U.S. She stepped into the history books the moment she refused in 1955 to give up her seat on a bus to a white passenger and move to the back of the bus. This small protest against segregation led to the Montgomery Bus Boycott, and is still remembered as an inspiring moment of courage today.

Sally Ride was the first American woman in space, blasting off on June 18, 1983. She had applied to become an astronaut as soon as NASA announced it would allow women to apply for the first time, in 1978. She helped break down the barriers keeping women from careers in science in the U.S.

Barbie’s Inspiring Women series was launched last year, just ahead of International Women’s Day, alongside other lineups centered around female role models. This particular series was made up of three women before Parks and Ride were chosen to join them: the famous aviator Amelia Earhart; iconic artist Frida Kahlo; and Katherine Johnson, one of the trailblazing female NASA mathematicians featured in the movie “Hidden Figures.”

Although parent company Mattel has been criticized for the unrealistic body proportions the Barbie dolls have, Barbies have been praised for introducing children -- particularly young girls -- to a wide variety of potential careers and skills.

Recently, the company partnered with National Geographic to create dolls based on scientific careers with a low percentage of women in them, such as astrophysicist and polar marine biologist. Mattel paired contest winners in Canada with a real life “role model” female scientist.

This year marks the 60th anniversary of the Barbie brand.

The Rosa Parks and Sally Ride dolls are available now for preorder, but will not ship until Sept. 6.