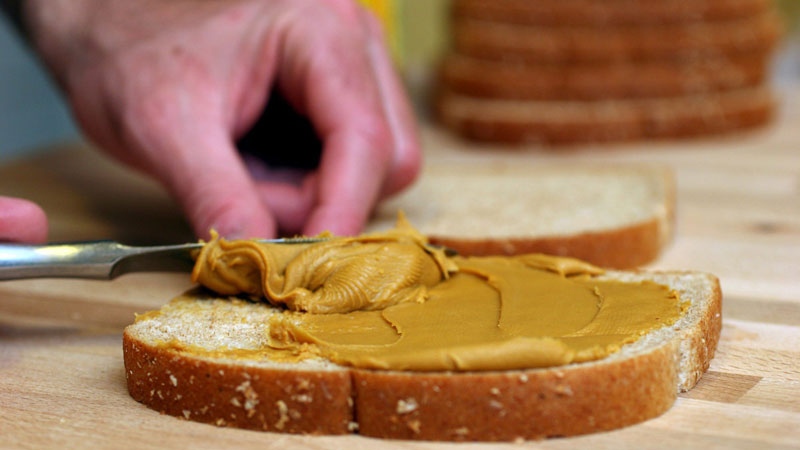 Many nut-free alternatives, such as soy nut butter, shown in this July 23, 2007 photo, are available in the health food section of supermarkets or natural food stores. (AP Photo/Larry Crowe)

David Ehmann admits packing a lunch for his 10-year-old son is not easy.

“He’s a picky eater. We struggle every day to make him something that’s both nutritious and that he’ll like,” says the Georgetown, Ont. father.

One thing Ehmann’s son does love is soy nut butter, which tastes just like peanut butter but is completely tree nut- and peanut-free. Too bad it’s effectively banned at Ehmann’s son’s school.

At several school boards across Canada, not only are there strict policies banning peanut and tree nut butters, many are also informing parents that “alternative spreads” aren't permitted in lunch bags either.

The York District School Board, the third largest in Ontario, began asking parents to stop using nut-free butters three years ago, explaining that the spreads are confusing for teachers and students because they look, smell and taste so much like real peanut butter.

“Our teachers monitor the kids’ lunches, and we really have no way to be able to tell the difference between real peanut butter and these other alternatives,” York Region District School Board spokesperson Christina Choo-Hum explained to CTVNews.ca.

“We chose to impose the policy consistently, and across the board, because it wouldn’t be fair to tell students at one school, 'Yes, you can bring this in,' and then tell kids at other schools, 'No.' We wanted to be respectful of all the children.”

For the manufacturers of these peanut butter alternatives -- often small, local start-ups -- the policies don’t make much sense. The whole point of their products is that they are nut-free and offer an alternative to peanut butter.

One pea butter maker in Smithville, Ont. called Peabut Nutter has tried to help frustrated parents by drafting a letter they can send to principals explaining the product’s ingredients and assuring them that the spread is nut-free and safe.

The makers of WowButter, a spread made from roasted soybeans that is peanut- and nut-free, have gone a step further. Two years ago, the Staffa, Ont-based company began including peel-off stickers under their labels that can be placed on sandwich containers to explain that it's made with WowButter, not peanut butter.

WowButter president Scott Mahon says the labels should eliminate any issues of peanut butter confusion, but he says there are still several school boards that have policies against his product and none seem willing to change them.

“The schools and school boards have dug their heels in. They won’t listen,” he says.

As sales of WowButter grow and more parents learn of the policies every September, Mahon says he hears more and more complaints from parents.

“Many of these parents are extremely upset and frustrated. And I’m as frustrated as they are,” he says.

Even parents of peanut-allergic kids report that their kids are being sent to the principal’s office for bringing in WowButter, Mahon says.

“The parents are saying, ‘Do you really think we would send our peanut-allergic kid to school with peanut butter?’ But the schools say that’s their policy. There just seems to be zero common sense going on.”

One angry parent started an online petition this week urging her school board to change its policy. Another London, Ont. parent Mahon has spoken to is considering organizing a protest day in which a large group of parents will send in WowButter sandwiches on the same day, effectively daring the school to send everyone to the principal’s office at once.

School boards are not able to legally ban nut butter alternatives, Mahon says, nor can they take sandwiches away from children. Instead, he says, they have students who bring in alternative spreads eat their lunch alone in another room or in the principal’s office. Mahon says that amounts to bullying, and isn’t fair to parents who are trying to abide by the peanut-free rules.

Mahon says he knows of several schools that have decided to allow spreads such as WowButter, sending a note home to parents saying the sandwiches are acceptable if they are properly labelled.

But the school boards that brought in policies against alternative spreads two or three years ago don’t seem interested in changing their policies now that his product contains labelling stickers.

“It’s like everything else: they don’t want to be that group that changes its mind. They’re not interested in compromise and they’ve dug in their heels,” he says.

Choo-Hum from the York Region Board says the school board did recently revisit the issue and decided that the stickers didn’t clear up the confusion in a satisfactory way. She says for many students with peanut allergies, seeing a sandwich with a spread that may have the ability to kill them is upsetting, and its policy respects those students’ right not to be unnecessarily worried.

“Ultimately, we put the wellbeing of our students as the top priority,” she says.