Back to school: How to help your kids learn to make friends 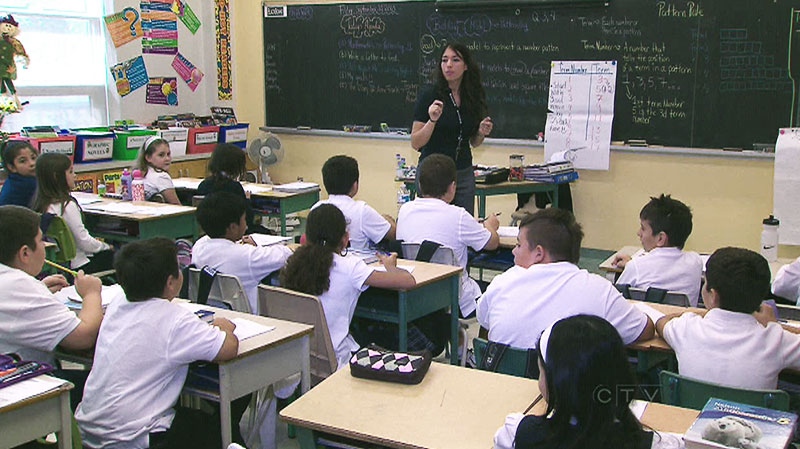 Most people aged four to 21 or so are about to hit the annual reset button.

Studies have shown good friendships convey a range of health benefits, with positive effects on mental and physical health and longevity. So learning how to make friends is a critical skill.

But it's not one that comes easily to everyone. Some lucky people seem to find forging new friendships is as easy as falling off a log. Many others, though, find themselves watching from the sidelines trying to puzzle out how to ease their way into this friend-making activity that appears to be going on all around them.

Most people aged four to 21 or so are about to hit the annual reset button -- the clean slate offered by starting or going back to kindergarten, school or university. What better time to be thinking about how to help kids learn how to make friends?

Here are some pointers from Tracy Vaillancourt, a professor of education and psychology at the University of Ottawa, and Barry Schneider, a child psychologist and professor at Boston College:

The first 'R' of education

Vaillancourt believes more focus should be put on helping children learn how to forge friendships and interact in a positive way with others.

"I think it's the most important lesson in life. I don't think there's anything more important," she insists. "Social skills get people so far in life. And so having good social skills is attached to having friends."

While the onus falls on parents to help children learn these skills, schools can and should play a major role, Vaillancourt says.

"Teachers are very focused on reading, writing and arithmetic when they should really be focused on relationships. That should be the first 'R' of education."

She advises parents of children who are having trouble making friends to enlist the assistance of their schools.

Teachers can help children make connections by pairing shy kids together for a work assignment and keeping an eye on quiet or disruptive children to make sure they aren't getting left out. Where shy kids often don't draw people to them, aggressive kids tend to push them away with their behaviour.

"I think that teachers need to help facilitate that social landscape of their classroom," Vaillancourt says. "The teacher is a powerful ally and can create social alliances and destroy them quite readily."

Schneider advises that parents avoid a couple of approaches he calls the marionette model and the Charles Darwin model of interpersonal skills development for children.

The marionette approach involves parents being over-controlling, essentially trying to teach children how to be sociable by rote. Parents who take the Charles Darwin approach are under-involved, he suggests, assuming that kids will be kids and things will evolve naturally.

He doesn't use the term, but the approach Schneider advocates might be called the Goldilocks solution, an approach that nestles somewhere between trying to control every aspect of a child's social life and taking a hands-off approach.

With younger children early in the friend-making stages, Schneider says parents need to make opportunities for children to meet and interact with others.

Set up play dates and enrol kids in desirable activities -- something they will enjoy that involves other children. Maybe that's ballet lessons or soccer. Whatever it is, it should be something the child enjoys and an activity that isn't too competitive, he says.

Schneider also suggests parents should show children what friendships are like by talking about their own so that kids understand that it's important to have connections with a wider circle than simply one's family. Children learn by watching the adults in their lives, so if parents value friendships, children probably will too.

Having conversations about aspects of friendship is also helpful, he says. For example, a parent could ask how a playmate might feel if the child won't share toys or demands to make all decisions about what games will be played.

Vaillancourt says parents should understand that learning how to make and maintain friendships is a skill that can be acquired, but it might take some work.

Some parents may feel the impulse to shield children who are shy or are having trouble fitting in by picking them up at school so they don't have to endure a dreaded bus ride, for instance. That actually can further isolate children from their peers, Vaillancourt says, suggesting that making friends is like any other skill -- the more you do it, the better at it you become.

Birds of a feather

Sometimes kids who have been socially isolated in elementary school have more success when they start high school, Vaillancourt says.

High schools generally have larger student populations, increasing the chances that a kid who doesn't like sports but is passionate about chess will find a kindred spirit. The clubs and sports activities that form in high schools are often not available in elementary schools.

"Solid friendships tend to be based on similar interests and ideologies. So finding people that are like you, you're probably going to be more successful. If you're painfully shy and your best friend is just out there (extroverted), I think that could be a bit of a challenge over time."

Vaillancourt says studies have shown that children who are shy form strong friendship bonds with others like them, and they report high satisfaction from those ties.

"Their friendship groups tend to be stable. Because they're not these outrageous kids looking for the next interesting thing, right? They're true and loyal," she says.

If it's not working, get help

Learning how to make friends is easier if you start early, Vaillancourt says.

Schneider says transition periods are hard, so give a child some time to get settled. But if by November of a school year it's apparent things aren't working well, it may be time to get some help.

That doesn't have to be a psychologist right off the bat, he says. School guidance counsellors, family doctors or a skilled member of the clergy, if a family has religious ties, can sometimes help.

Whatever approach a family takes, it's important not to let the problem fester, Vaillancourt says. "We can't ignore this. And kids report that. What they want more than anything is to belong."