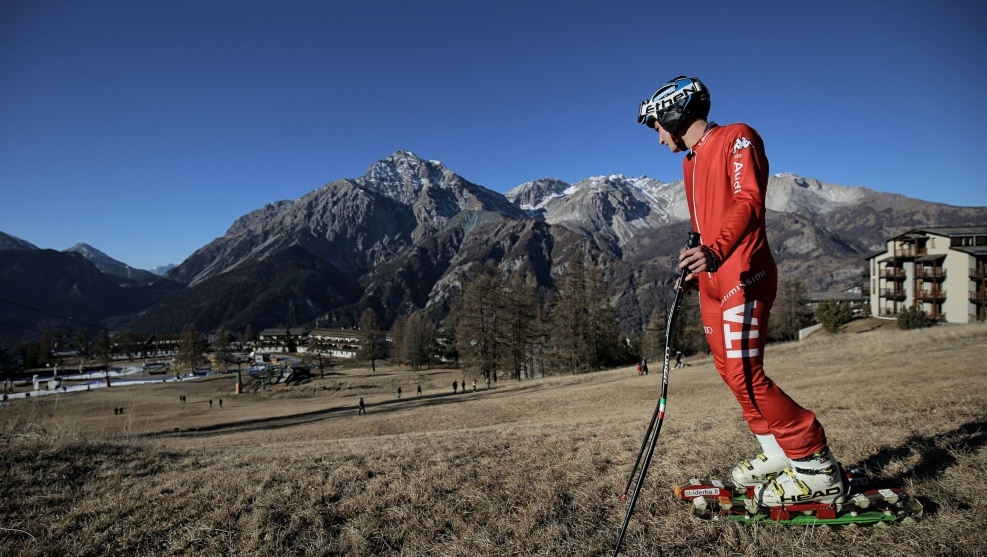 The Alps are particularly exposed to the ravaging effects of global warming. AFP.

MONTCLAR, FRANCE -- Last Christmas, for the first time in its existence, a ski resort in the French Alpine town of Montclar could count neither on Mother Nature nor its artificial snow machines to produce enough of the white stuff to cover its pistes.

Instead, it had to use a helicopter, at great cost, to bring snow from the high peaks of the Alps to lower, warmer altitudes where, unusually, there was no natural ski cover.

The predicament came as a shock for the small community that relies heavily on the snow for its survival, not just for this season but as a portent of things to come as climate change wreaks havoc with temperatures.

The Alps are particularly exposed to the ravaging effects of global warming.

According to the International Commission for the Protection of the Alps (CIPRA), temperatures in the mountain range have risen by nearly two degrees Celsius (3.6 degrees Fahrenheit) in the past 120 years -- almost double the global average, and will continue on the same upward trend.

The WSL Institute for Snow and Avalanche Research in Davos, Switzerland, warns on its website of increasingly common "green Christmases" in the Alps, with stations below an altitude of 1,300 metres most affected.

"The vast majority of stations are seeing a clear reduction in the number of days with snow-covered ground, regardless of their altitude or location," it said.

Every year the snowfall recedes to higher and higher altitudes from about 1,200m in the 1960s to around 1,500m today.

"The cold spells are getting shorter and shorter," resident snowmaker Bruno Farcy told AFP while steering his snow groomer over the slopes, filling holes and adjusting the curvature of the pistes to make sure they are exposed as little as possible to the sun's melting rays.

With snow in short supply, nothing can be left to chance in the battle against the thermostat.

"That's why the trend is moving towards investments, to increase the instant production capacity, in order to be able to cover the whole area in as much snow as quickly as possible," said Farcy.

Montclar was among the first resorts, already in the 1980s, to install artificial snow guns to augment nature's gift.

Today, the resort boasts an impressive network of snow-spouting "guns" that kick in automatically if the temperature drops to under minus two degrees Celsius (28.4 F), as well as transportation pipes and storage tanks.

But even all this was not enough during this unseasonably warm winter. No snow had fallen on the pistes in time for the crunch Christmas skiing season, and it was too warm to operate the snow guns.

"We considered all options, tipper trucks, tractors..," said Alain Quievre, who runs the company that manages the resort's ski lifts.

In the end, they rented a helicopter to bring natural snow down from an altitude of 2,000m, a "difficult choice" given concerns for the environmental impact, he added.

The operation lasted three hours and required 400 litres of petrol -- about 0.7 percent of the station's annual fuel consumption, said Quievre, while underlining that "at stake were the jobs of 50 fulltime and 43 seasonal workers."

Fake is the future

Dressed in the red, padded jumpsuit of the ski school, Lionel Haud wonders aloud about the wisdom of the 10,000-euro investment he made a few years ago in the resort, which is owned by a number of private investors, including employees, local merchants and even customers.

He is a glass half-full kind of man.

"We have to prepare for the future, that's for sure. There's warming, there's no denying it. But there's always snow at higher altitudes," said Haud.

"I've been here for 25 years and I have known many bad seasons. But now, with snowmaking, that's over."

Such adaptation is not without risk, however.

Already, the community was having trouble repaying loans on previous improvements, which happened at the expense of other, much-needed municipal improvements such as new pavements.

Scientists caution that artificial snow-making is not good for the environment either, as it uses massive amounts of water and energy.

Looking to a future, some are shifting to summer skiing, hiking and cycling, which currently make up only a small part of the income of traditional winter sport resorts.

"Initially, everyone will be able to make it even at low altitudes because the variability of the snow cover means that there will still be years when there is snow," said climatologist Christophe Chaix of the Agate research agency, who focuses on Alpine adaptation to warming.

"If we gain one degree, 1.5 degrees, two degrees within 30 years, then it will become very complicated at low altitudes. So they will have to have started diversifying already."