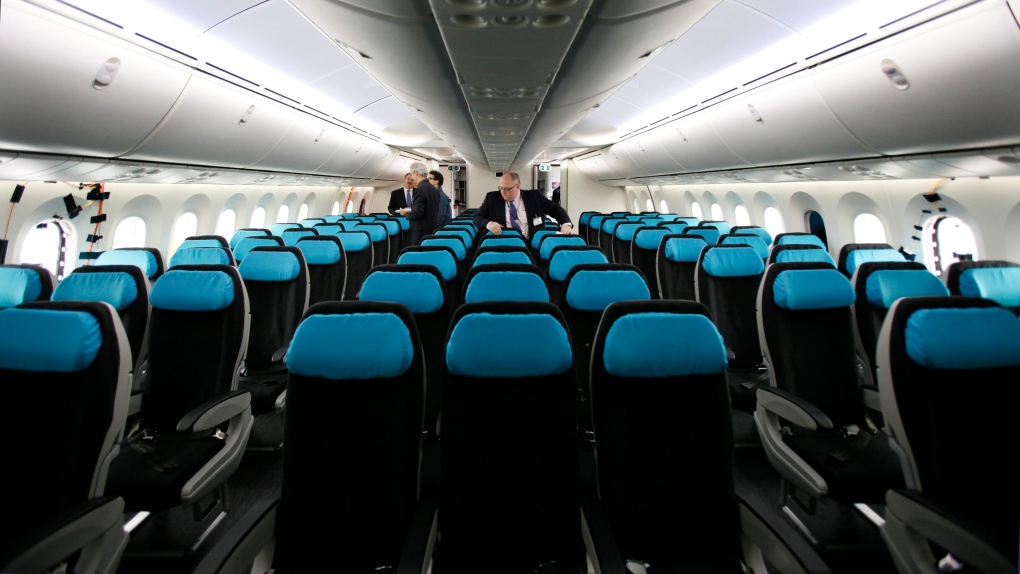 Seats are in place in the passenger cabin of the first Boeing 787 with the interior installed at the production plant in Everett, Wash., Wednesday, Feb. 3, 2010. (AP Photo/Elaine Thompson)

It’s a familiar scenario that most travellers have encountered on a plane: there are three seats in a row and only four armrests.

So, who should use the middle armrests?

This question of airline etiquette was recently debated on Twitter after the U.S. sports program “Rich Eisen Show” posed the question to their followers for an informal poll on Thursday.

“Does the person sitting in the middle seat on an airplane get both armrests?” the poll asked.

Despite receiving more than 92,000 votes, participants appeared to be split with 53 per cent responding “no way” and 47 per cent answering “definitely.”

According to those in favour of giving the middle seat passenger both armrests, it’s only fair that they should use them because the person in the aisle seat has extra legroom and the person in the window seat has a view and a wall to lean against.

Yes. Plane etiquette rules are as follows: Left Seat: aisle with extra leg space and left armrest. Middle Seat: Both armrests. Window Seat: Window and place to lean against and right armrest. We are a society of rules, not animals.

Other commenters, however, said the armrests should go to whoever claims them first.

1st come - 1st served.
Middle seat sucks; we all know this
If you don't want the middle, pick your seat earlier.
If you choose not to (for whatever reason) you deal with the consequences of your decision.

First arm rested claims ownership for the duration of its inhabitance. Once it moves, other arms may take possession.

Some respondents said the middle seat should be done away with entirely.

There should be no middle seat

“People would come sometimes down to the galley because they don’t want to sit in their seats because it’s so uncomfortable because somebody’s taking up too much space, and using the armrests,” she told CTVNews.ca during a telephone interview from London on Friday.

“People would moan quite a lot.”

Despite the complaints, Stainton said airlines don’t have official protocol for sharing armrests and that travellers should just use their judgment.

“I think it’s just a matter of being courteous and using your common sense,” she said. “If it’s a larger person, I perhaps wouldn’t begrudge them for taking both armrests because they need a little bit more space. If it’s a child, then maybe I would expect that I’d get that armrest because the kid doesn’t need as much room.”

The former flight attendant also said that if she’s sitting in one of the seats on the end, she will give the middle passenger more space if she notices the passenger on the other end isn’t giving them very much room.

Gabor Lukacs, the founder and co-ordinator of Air Passenger Rights, echoed Stainton’s sentiment that passengers should use their common sense when they’re sitting next to each other on planes.

“If someone next to me is very large, they probably need more space than I do. Yes, I paid for the same amount as they did, but in reality, they need the space more than I do,” he explained. “Is it comfortable? Pleasant? No, but it’s another human being and they’re fellow passengers.”

Lukacs said the debate over armrests is actually representative of a broader problem in the airline industry.

Instead of becoming upset with your neighbours on the plane, Lukacs said travellers should direct their dissatisfaction at the airlines.

The passenger-rights advocate said the armrest issue is just one of many other problems currently plaguing the industry.

Lukacs said the federal government’s recent air passenger protection regulations, which come into effect in July, will harm passengers in a number of areas, including flight delays and cancellations. He said the government’s new rules stating that airlines can’t keep passengers in a plane on the tarmac for longer than three hours and 45 minutes is more than double the Canadian standarad of 90 minutes that was established in 2008.

“If you think you have a problem with your armrest, just imagine how long, how it would feel to have that kind of problem happening for three hours and 45 minutes in addition to your flight time,” he said.

Stainton said from her experience, conflicts between passengers often arise over more than just the armrests. She said cramped leg room and reclining seats can also aggravate travellers.

Occasionally, Stainton said cabin crew has been forced to intervene and mediate in disagreements. For the most part, however, she said a little politeness can go a long way.

“I think it’s just a matter of saying ‘Do you mind giving me a little bit more space?’” she said.

does the person sitting in the middle seat on airplane get both armrests?