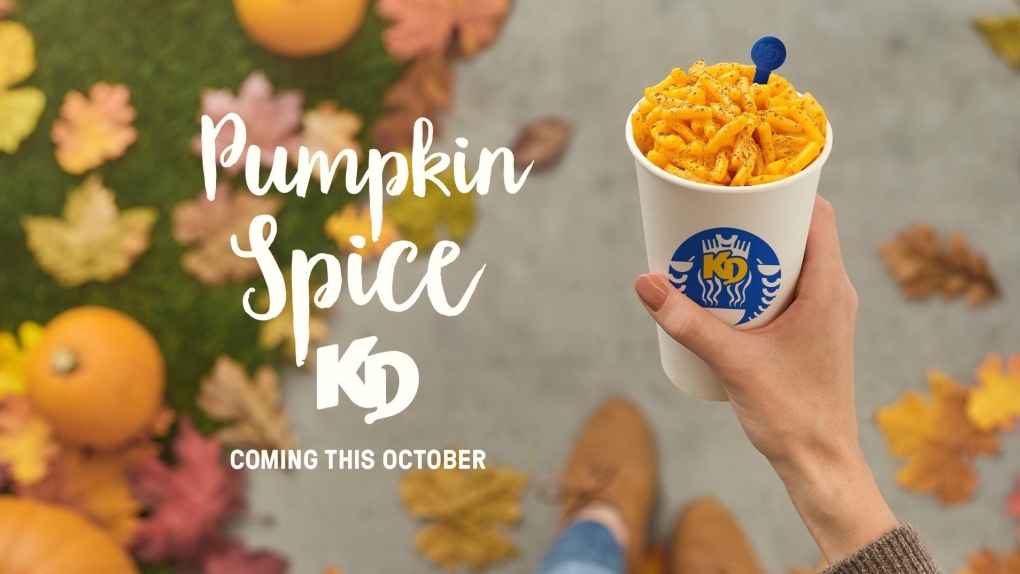 TORONTO -- In an announcement on the first day of fall, Kraft Heinz Canada says it is adding the flavour of a popular seasonal spice mix to one of its iconic comfort foods.

The company said Tuesday that it will be launching Pumpkin Spice Kraft Dinner (PSKD) in October, to "please KD lovers and the cult following of pumpkin spice latte aficionados."

While Kraft Heinz Canada is just the latest company to jump on the pumpkin spice bandwagon, it said its unusual new product "ain't no basic batch."

"While Pumpkin Spice KD may be trolling the classic 'PSL', this spicy cheesy treat is very real and will come in a signature white cup with cinnamon spice topping," Kraft said in a press release.

According to the company, Pumpkin Spice KD is made with classic KD cheese powder in addition to seasonal fall flavours such as cinnamon, nutmeg, allspice and ginger. The company suggests Canadians pair the new product with "a cozy scarf, flannel shirt, fresh manicure and a pumpkin patch."

Only 1,000 people will get their hands on the new product and Kraft says Canadians have already started signing up for the online waitlist to be notified when Pumpkin Spice KD drops.

The press release says those who get the drop will receive a box of Kraft Dinner, a Pumpkin Spice Boost Pack, a fork, and a "signature white coffee style cup with your name written on it (spelled wrong of course)."

"KD has always been known for its one of a kind cheesy taste and after years of watching Canadians get excited for pumpkin spice season, we felt that it was time to combine the two iconic flavours and create Pumpkin Spice KD," Kraft Heinz Canada senior brand manager Brian Neumann said in the release.

While fall has just begun, Google says Canadians began embracing the season and its flavours weeks ago.

According to a release from Google, search trends for Starbucks' iconic Pumpkin Spice Latte spiked in late August in Canada with Canadians even out-searching the drink compared with people in the U.S.

"Canadians have always made KD their own way and not many people would expect KD to be part of the PSL conversation, but that's the whole point," Neumann said. "Only 1,000 will be made. So, move over lattes and muffins, PSKD is the must try new flavour this fall."