A Wisconsin couple couldn't fly their Pride flag, so they lit up their home like a rainbow 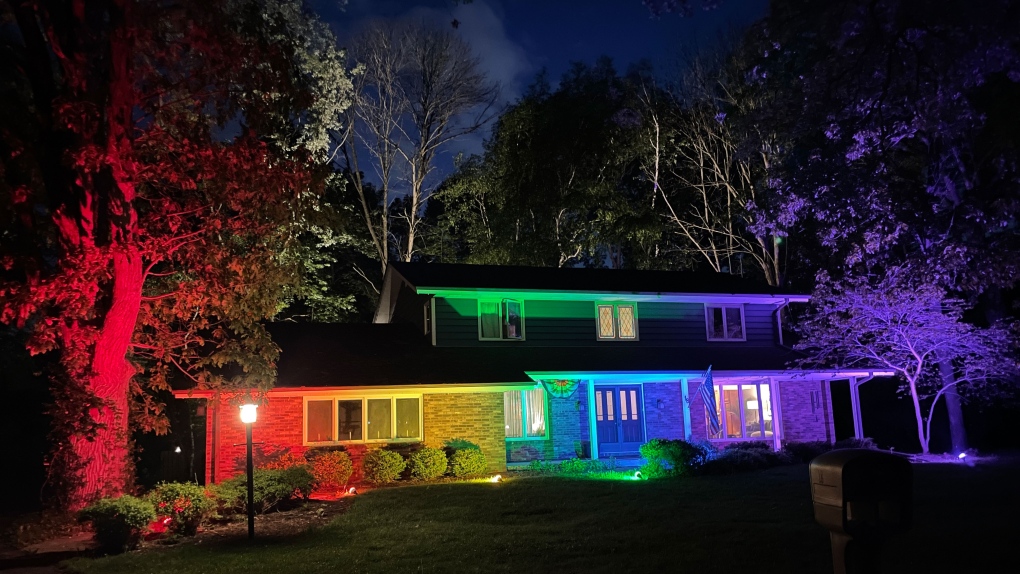 A Wisconsin couple decked out their home in the colors of the Pride flag after their HOA enacted a policy banning all flags (except the American flag) from being flown. (Memo Fachino via CNN)

Memo Fachino and his husband, Lance Mier, have flown a Pride flag in front of their Wisconsin home for five years.

It's a symbol of inclusion, Fachino said, and a signal to the rest of their Racine neighborhood that all are welcome there.

So when their neighborhood homeowners' association enacted a new policy last month that barred residents from flying anything other than an American flag, Fachino found a workaround -- and turned his home into the Pride flag.

On May 31, Fachino and Mier set up six floodlights -- one for each color of the standard Pride flag -- and pointed them toward the front of their brick home. The display bathes the house in a rainbow glow all night long.

"Simple representation and diversity is important to us," Fachino told CNN. "We would like to see that in a neighborhood if we were looking to buy a house and were driving around."

Fachino, who sits on the board of his neighborhood in Racine, told CNN that he doesn't believe there was any "ill intent" from the management company that runs the HOA, which asked Fachino to remove the physical Pride flag.

On Reddit, where the photo of Fachino's home initially took off, Fachino wrote that the HOA likely enacted the rule because of neighbors flying flags expressing political views, including flags that referenced the Black Lives Matter movement or the "Thin Blue Line," a symbol of support for police.

CNN reached out to the company that runs the HOA for comment on its flag policy and is waiting to hear back.

But the HOA's guidelines do allow for "removable lighting" in front of single-family homes like Fachino's. He had previously installed removable lights for elaborate holiday displays, so he knew his nod to Pride wouldn't break any rules.

It was important to Fachino to keep his home's Pride flag up in some form -- a few years ago, he said, a neighbor struggling with their gender identity wrote to the couple and thanked them for displaying the flag.

"When they reached out to us, they weren't feeling accepted in their family but found hope in knowing that acceptance was out there in the community," Fachino told CNN. "We don't expect to have that same impact with our display, but perhaps it gives someone an idea to replicate [the display] on their home?"

Still, the national attention was unexpected, he said, and he'll probably dim the lights permanently at the end of June (and the end of LGBTQ2S+ Pride Month).

"We live at the end of a cul-de-sac, so it's not like hundreds of people drive by our home or anything," he said.

But for now, Fachino and Mier's home is a rainbow beacon at the end of their street, which Fachino hopes serves as a reminder to remain inclusive and accepting.