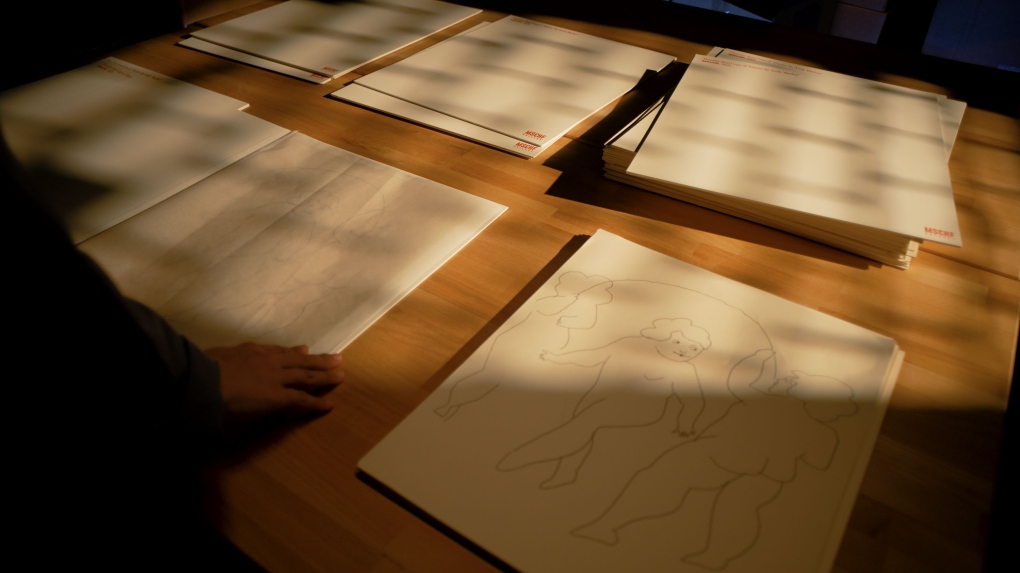 Aside from expert opinion, the collective believe the forgeries are so good they will permanently cast doubt over the work's authenticity. (MSCHF)

An art collective purchased an original Andy Warhol drawing for US$20,000 and is selling it to one lucky buyer for just $250. But there's a catch: The artwork is being offered alongside 999 high-quality forgeries -- and even their creators can't tell them apart.

This is the latest stunt by New York's MSCHF, the group of around 20 artists infamously sued by Nike for creating modified "Satan" sneakers containing real human blood.

Dubbed "Museum of Forgeries," the group purchased an authentic 1954 Warhol pen drawing, titled "Fairies," and then used digital technology and a robotic arm to recreate the artist's exact strokes, before using heat, light and humidity to artificially age the paper.

Having mixed the 999 fakes with the lone original, MSCHF now claims not to know which is the real Warhol. And from Monday collectors can buy one of the 1,000 works, each titled "Possibly Real Copy Of 'Fairies' by Andy Warhol," for $250.

If all the pieces sell, the group would have made over 12 times what it originally paid for the drawing. But MSCHF also hopes to poke fun at an industry more interested in the authenticity of an artwork -- or who created it -- than the art itself, said chief creative officer, Lukas Bentel.

"For the majority of high-net-worth individuals collecting art, it's not about the aesthetic value," he said during a video call from New York. "It's just about the investment value. Will this appreciate in time or not?"

"It's always very funny," added creative director Kevin Wiesner, "to do pieces that are able to simultaneously spit in the art world's face, and also do what they're trying to do -- which is use art as an investment vehicle -- but better."

The collective believes that whoever buys the authentic Warhol may never realize it. While admitting that an expert might still be able to decipher the difference, Wiesner said the forgeries are good enough to cast permanent doubt over the work's provenance.

"You'd have to be out of your mind to take seriously a gallery that is offering this piece as a (authentic) Warhol in the future ... we hope the chain of trust is irrevocably broken here."

As well as commenting on the subjective nature of value, MSCHF hopes to make Warhol's work accessible to those who might not otherwise be able to afford it. According to Bentel, the project isn't only destroying the value of one artwork -- it's creating an entirely new one that is jointly owned by all 1,000 buyers.

"A Warhol piece is completely unrealistic for most people to even come close to getting," he said. "In some way, we're democratizing it by letting everyone have what could be a Warhol."

Wiesner suspects that the artist, a figure who famously explored -- and exploited -- mass production in his own work, would approve of the project.

Whether the Andy Warhol Foundation, which manages the pop artist's estate, is so enthusiastic about the stunt remains to be seen.

MSCHF said it doesn't anticipate legal difficulties. But, as chief revenue officer Daniel Greenberg conceded, the group thought the same when teaming up with rapper and singer Lil Nas X to create the controversial blood-filled "Satan" shoes earlier this year.

In March, the sportwear giant sued MSCHF for trademark infringement, claiming that the "unauthorized Satan Shoes are likely to cause confusion and dilution and create an erroneous association between MSCHF's products and Nike."

"There are two things I said at the time that I'll never forget," recalled Greenberg. "One was, 'I hope Nike sues us.' And (the other was), 'this is 10,000 percent legal. And man, did they make my wish come true."

The two parties eventually reached a settlement, thrusting MSCHF into the global spotlight in the process. But the group had been making headlines since 2019, when it sold a laptop installed with some of the world's most dangerous viruses for over $1.3 million. It has since embarked on a series of irreverent "drops," a series of tongue-in-cheek art projects unveiled once every two weeks.

In 2020, the group spent over $30,000 on one of Damien Hirst's famous spotted artworks, before cutting out each of the 88 colored dots by hand and selling them separately for huge profit. Then, earlier this year, the collective ripped apart four Hermès Birkin bags to create what could be the world's most expensive sandal -- dubbed "Birkinstocks" -- that were priced between $34,000 and $76,000.

By forging Warhol's work, Bentel hopes to continue "creating value through destruction." And the art world's latest enfants terrible seem intent on holding up a mirror to the industry along the way.

"If it's satire and it doesn't get a reaction," Wiesner said, "then it's just a description of reality."