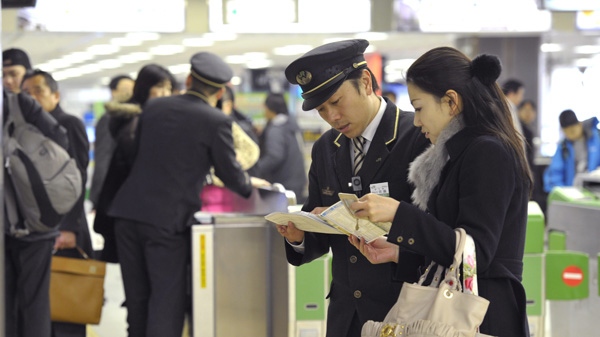 TOKYO - A strong earthquake triggered a small tsunami along Japan's northeastern coast Wednesday and shook buildings hundreds of miles away in Tokyo. There were no immediate reports of significant damage or injuries.

Some train lines in the northeastern prefecture of Iwate were temporarily stopped after the magnitude 7.3 quake, but they were restarted shortly after. Tohoku Electric Power said there was no damage at its nuclear power facility in the region.

A 60-centimetre tsunami reached the coastal town of Ofunato and other towns reported smaller waves reached shore about 30 minutes after the quake, which occurred at 11:45 a.m.

It was centred about 150 kilometres off the northeastern coast at a depth of about eight kilometres, Japan's meteorological agency said.

"We have confirmed that small tsunami have come up on the shores, but we have no reports of damage at this point," said Shinobu Nagano, an emergency and disaster response official in Iwate. "We are still trying to determine the impact of the quake."

The Pacific Tsunami Warning Center in Hawaii said a Pacific-wide tsunami was not expected.

In Tokyo -- about 440 kilometres from the epicentre -- office buildings swayed and creaked for about 30 seconds.

There was a 6.3 magnitude aftershock shortly after the main quake, the meteorological agency said.

Japan lies on the "Ring of Fire" -- an arc of earthquake and volcanic zones that stretches around the Pacific Rim and where about 90 per cent of the world's quakes occur.

In 1933, about 3,000 people were killed around Ofunato by an earthquake and tsunami that had a maximum wave height of 28 metres, according to the U.S. Geological Survey. In 1896, a magnitude 8.5 earthquake generated a tsunami that killed 27,000 people in the area.