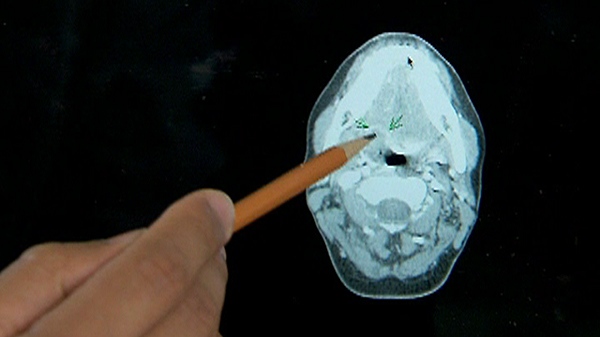 A tumor in a tonsil is shown on a CT scan.

WASHINGTON - When your child's doctor orders a CT scan, X-ray or similar test, there are two big questions: Is the scan really needed? And if so, will it deliver a child-sized or adult-sized dose of radiation?

That's the message from the Food and Drug Administration on Wednesday, as it took steps to help protect children from getting unneeded radiation from these increasingly common tests.

The FDA is pushing manufacturers to design new scanners to minimize radiation exposure for the youngest, smallest patients. And it posted advice on the Internet urging parents to speak up when a doctor orders a scan -- to ask if it's the best option or if there's a radiation-free alternative -- and to track how many their child receives.

Too much radiation from medical testing is a growing concern, especially for children, because it may increase the risk of cancer later in life.

"We know imaging is extremely valuable, but we can probably do it with less radiation," said Dr. Dorothy Bulas of Children's National Medical Center in Washington, past president of the Society for Pediatric Radiology.

The use of CT scans, which show more detail than standard X-rays but entail far more radiation, and other X-ray based medical imaging has soared in recent years. The tests can be critical to a good diagnosis, and specialists say people who really need one shouldn't avoid it for fear of future risk from radiation.

But research shows too often the scans are unnecessary -- they're given too frequently, for example, or in place of other tests that don't emit radiation. Children are of particular concern because their rapidly growing tissues are more sensitive to radiation. Plus, they have more years ahead of them for radiation-triggered cancers to develop.

One recent study concluded the average child will receive more than seven radiation-emitting scans by age 18.

And while pediatric hospitals routinely adjust scanner doses for youngsters' smaller sizes, 90 per cent of child imaging is performed in general hospitals -- and the FDA said no one knows how many make those adjustments.

The goal of Wednesday's guidelines: "Regardless if my child is imaged at a pediatric hospital or a local community hospital, they get the same basic care," FDA biomedical engineer Jana Delfino told The Associated Press. "Everybody should be able to do it."

Under the FDA's proposal, new medical imaging devices would come with dose settings and instructions for children of different ages and sizes -- or be labeled not for pediatric use. While the guidelines wouldn't require changes to existing scanners, those eventually would be upgraded and fall under the same standards. The guidelines are open for public comment for four months before the agency will finalize them.

A voluntary campaign called Image Gently, run by the Alliance for Radiation Safety in Pediatric Imaging, over the past few years has helped teach health providers how to program existing scanners to give child-size radiation doses, plus other steps such as shielding vulnerable organs from the beam.

But Dr. Marilyn Goske of Cincinnati Children's Hospital, who chairs the alliance, said FDA's move "puts the spotlight on children."

Doctors don't keep track of how much radiation their patients receive from testing. They just order a scan, and how much radiation results can vary widely by the age and brand of machine, and the possible diagnosis. An average CT of the head for an adult is equal to about 100 chest X-rays, the FDA says, while a CT of the abdomen brings even more.

While there's no generally accepted safe lifetime radiation dose for children, Schulman tells parents to keep a list of their child's medical scans -- and pull it out every time a doctor considers ordering another one. That's especially helpful for children with chronic diseases who truly need more medical scans than the average youngster.

Consider 4-year-old Sarhea (Sa-RAY-ah) Kaupp of Cincinnati, who has cystic fibrosis and serious intestinal complications. By her mother's count, she's had more than 100 X-rays, three CT scans and multiple fluoroscopies, like an X-ray movie.

"The risk of radiation in our experience, it has to happen. It's the lesser of two evils," says her mother, Sarah Kaupp. But she lists all her daughter's latest scans at every doctor visit to avoid any unnecessary repeats.

And now she only gets them at a pediatric hospital, after X-rays from a stand-alone facility had to be repeated twice because the technicians aimed wrong and took blurry shots. Until then, "I thought an X-ray was an X-ray," Kaupp said.

For parents, the FDA recommended:

--Keep a list of your child's medical scans. At the least, it helps guard against unneeded repeats.

--Ask the doctor who orders a scan how it will improve the child's care and whether there are alternatives, such as MRI or ultrasound, that don't use radiation.

--Ask the imaging facility whether it uses reduced radiation techniques for children.

The FDA also is urging doctors to consider how many scans the child already has had and the possibility of alternatives before ordering another test.

"It's something you need to use conscientiously," Schulman said of the scans. "Any radiation you don't need is radiation you shouldn't get."