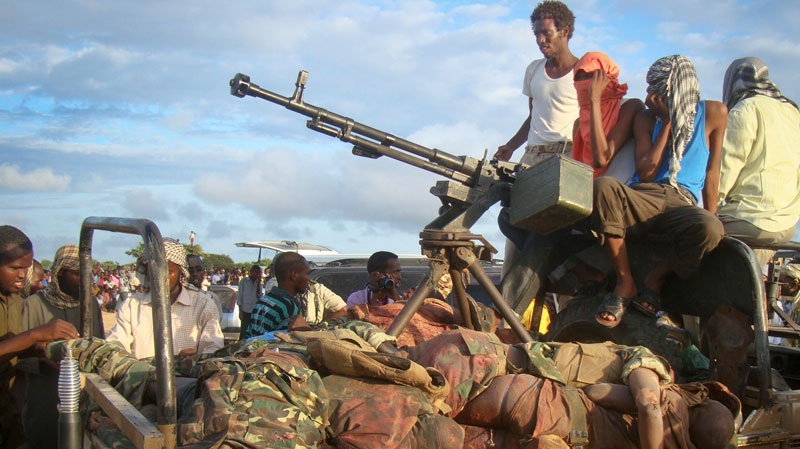 FILE - Somali militants are shown in this file photo.

ADDIS ABABA, Ethiopia - Kenyan troops in Somalia closed in on the rebel-held town of Afmadow where they may fight their first ground battle against al-Qaida-linked militants since launching an offensive last weekend, a military spokesman said.

Hundreds of residents were fleeing Afmadow on Saturday in anticipation of fighting as Kenyan and Somali troops moved closer.

"We believe this movement will create the first ground offensive," Chirchir said.

Kenya had been bombing militants from the air but the charge at Afmedow will be first "man to man fighting situation," he said.

Al-Shabab militants are regrouping in the town of Bula Haji to reinforce their fighters in Afmadow, Chirchir said.

Osman Ahmed, a resident in Afmadow, said there is alot of tension with militants preparing to do battle with Kenyan and somali government troops.

"We sleep and wake up with fears, only gunmen and sporadic civilians are crossing the streets. It's a frightening situation," he said.

Kenya last weekend sent its troops into Somalia to pursue al-Shabab militants blamed for a string of kidnappings on Kenyan soil.

Somali gunmen have kidnapped four Europeans in the last six weeks -- two from the Lamu coastal region and two from the Dadaab refugee camp. One of the hostages, a quadriplegic French woman, died on Wednesday.

Kenya's government says the kidnappings threaten the country's tourism industry -- a key driver of the economy-- that had bounced back after near collapse following postelection violence three-years-ago in which more than 1,000 people died.

Also Saturday the U.S. Embassy warned that an imminent terrorist attack in Kenya is possible. It said likely targets include places that foreigners congregate, including shopping malls and night clubs.

In response to the Kenyan military incursion, al-Shabab on Monday threatened to carry out suicide attacks in Kenya similar to those in July that killed 76 people watching the World Cup final in Uganda. Al-Shabab said that attack was a response to Uganda sending troops to support Somalia's government.

Somalia has been a failed state for more than 20 years. The lawless country is a haven for pirates and international terrorists and the conflict is causing a major famine which is believed to have cost tens of thousands of lives already.

Al-Shabab is blocking aid from reaching hungry Somalis, after it banned major aid groups from operating in the territories it controls.

Chirchir said the overall strategy of Kenya's military incursion is to reduce al-Shabab's effectiveness and restore authority to Somalia's government in order to achieve enduring peace.

Al-Shabab has retreated before the Kenyan forces so far, but the militants have struck back in the Somali capital with a series of bombings -- including a truck bomb that killed over 100 people. On Thursday, they put up a bloody fight when AU forces arrived in Deynile, al-Shabab's last base in Mogadishu.

Otherwise, the Kenyan army has so far met little or no resistance during their push into the rebel-controlled areas of Somalia, as it marches toward its ultimate target; the al-shabab stronghold of Kismayo.

Kenya's troops are untested and it isn't clear they are prepared for a long-term occupation requiring counterinsurgency skills -- a scenario that ended U.S. and Ethiopian interventions during Somalia's 20-year-old civil war. The Somalia operation is Kenya's biggest foreign military commitment since independence in 1963.

However, al-Shabab is facing a major crisis which may have weakened its ability to put up a resistance.

The militia has been weakened by a severe drought and famine in its strongholds, a loss of revenue from markets in Mogadishu where it pulled out under pressure, internal divisions and public discontent over their strict punishments, recruitment of child soldiers and indiscriminate bombings.

Kenya's Minister for Foreign Affairs, Moses Wetangula, said Friday that al-Shabab are on the run and growing weaker by the day. Wetangula spoke after attending a meeting in Ethiopia of East Africa's Inter Governmental Authority for Development, also known as IGAD, on the Somali issue.

"The long-term goal is to eradicate al-Shabab from Somalia," he said. "The territorial integrity of the whole IGAD region is under threat."

Burundi and Ugandan forces make up the 9,000 African Union peacekeeping force, which is supporting the weak U.N.-backed Somali government. The AU forces on Thursday forced the militant group out of its last bases in the Somali capital of Mogadishu.