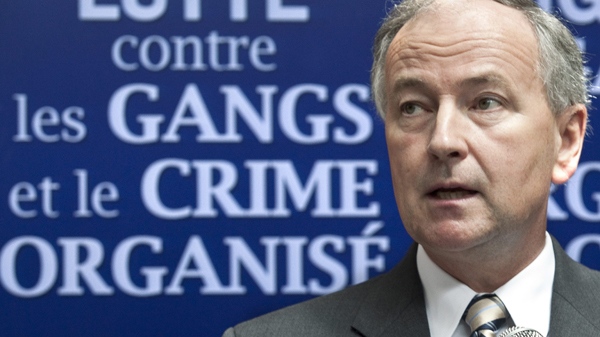 OTTAWA - Justice Minister Rob Nicholson backs a cabinet colleague's controversial claim that unreported crimes are too high and he urges Canadians to step up and call the police more often.

But Nicholson stopped short Wednesday from fully endorsing the view of Treasury Board President Stockwell Day, who a day earlier raised eyebrows when he claimed Canada needs more prisons in part because so many crimes go unreported.

"We treat all crime as serious in this country and we encourage all people to report crime to the appropriate authorities," he added.

"I get anecdotal evidence and there are certainly some studies on that."

Nicholson's office circulated talking points in support of Day's remarks at a Tuesday new conference during which he said the number of unreported crimes is "alarming and it shows that we can't take a liberal view to crime."

In support of Day, Nicholson's spokeswoman referred to the General Social Survey conducted by Statistics Canada that asks people if they've been victims of crimes and if they reported them to police.

The most recent survey, conducted in 2004, showed a slight decrease, from 37 per cent to 34 per cent, in reported crimes. The survey is conducted every five years and the 2009 figures are not due to be released until next month.

"A lot of property crimes go unreported in this country. That's a fact. There are surveys that are consistent with that," said Nicholson.

Liberal justice critic Mark Holland agreed that unreported crime is a legitimate phenomenon, but questioned Day's suggestion that it justifies expensive new prisons during an era of huge budget deficits.

"Is this an absurd reason to spend $10- to $13-billion on Republican-style mega-jails? Do they propose to lock up people who aren't being charged? To round up anybody who looks suspicious?"

Nicholson repeatedly sidestepped direct comment on Day's assertions, except to say that his cabinet colleague, in general, supports his party's tough-on-crime agenda.

Nicholson repeatedly said that the government has been consistent with its law-and-order agenda that has reduced credit for pre-trial detention, and continued Wednesday with new measures to combat organized crime.

The latest Statistics Canada crime figures, issued last month, show that overall crime dropped seven per cent in 2007, continuing a downward trend since the rate peaked in 1991. The report showed a decline in violent crime such as homicides, attempted murder, sex assaults and robberies.