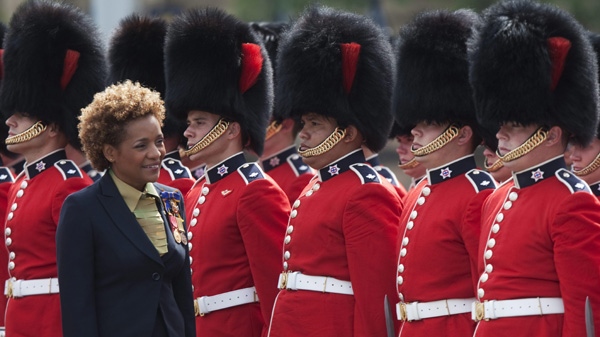 OTTAWA - Gov. Gen. Michaelle Jean says her appointment as UN special envoy to Haiti is an expression of the "solidarity and friendship" Canadians have demonstrated since the devastating earthquake in her homeland.

"It is with great passion, conviction and enthusiasm that I have agreed to take on this important mission, which fits in perfectly with the people-to-people diplomacy I have practised throughout my term," Jean said in a statement Tuesday.

Her appointment as special envoy for the United Nations Educational, Scientific and Cultural Organization (UNESCO) is "a tribute to Canada's leadership role in rebuilding Haiti," said Prime Minister Stephen Harper, who helped get her the high-profile job.

"She will be in a position to further advance the international community's response to the urgent needs in Haiti as it recovers from January's devastating earthquake."

"I will be encouraging the international community ... to make basic education, vocational training and higher education a priority and to work with the Haitian government and population to ensure sustainable and human development."

UNESCO was founded in 1945 and Canada became a member in 1946. Its mission is to contribute to building peace, eradicating poverty and promoting education, culture, science and communication. The organization currently has three designated special envoys: for water, for education, and for literacy and development.

There is speculation Harper wants to install a new vice-regal in time for the Queen's visit to Canada in less than two weeks.

The Governor General is largely a ceremonial post, but Jean has had weighty decisions to make and an unusually high profile during an extended period of minority governments.

In December 2008, she allowed Harper to prorogue Parliament and buy time to thwart an attempt by the Liberal, NDP and Bloc Quebecois opposition to form a coalition government.

Jean also gained international notoriety thanks to a video showing her eating raw seal meat at Rankin Inlet in what some interpreted as a sign of support for the controversial seal hunt.

The most lasting image of Jean, however, may be her tearful appeal in support of Haiti relief following the Jan. 12 earthquake that killed some 230,000 people and left another million homeless.