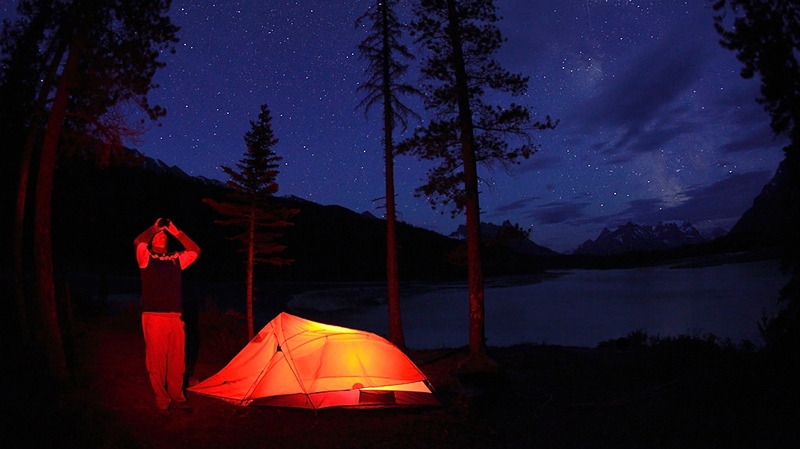 The 11,228 square-kilometre refuge, four hours west of Edmonton, in the Canadian Rockies, is 10 times the size of the next-largest designated area – Grasslands National Park in Saskatchewan.

It's so big, it could encompass all the other dark sky preserves in the world.

Dark sky preserves are designated wilderness areas where strict lighting ordinances help maintain the contrast between faint stars and galaxies and the black backdrop of space.

"Skies like this still give me goosebumps," Parks staffer Gloria Keyes-Brady said.

This past summer, she was interviewed in Jasper under Alberta's darkest skies for a feature on the designation that appears in the April issue of Canadian Geographic. "It feels as if the stars are single-handedly lighting up the Earth here."

Wilderness astronomy in the Canadian Rockies

The magazine feature -- on newsstands March 24 -- also looks at the emerging eco-tourism trend of wilderness astronomy, a pursuit more likely to be enjoyed by families and avid outdoors people than dedicated astronomy club members.

These "polar fleece astronomers" are ditching telescopes and using gear such as iPads and GPS-based star-finders to browse their way around the sky.

Image-stabilized binoculars sub-in for tripod-based scopes on camping trips deep in the bush, and other technology previously unavailable (or prohibitively expensive) is guiding campsite stargazers through the sky as the latest eco-pursuit.

While many dark sky preserves aren't anything special (the main facilities at one dark sky preserve in Ontario are an outhouse and a parking lot, while another is actually gated closed at night) Jasper is primed to take advantage of this growing trend in eco-tourism: This summer and fall, the park will add a slate of one-of-a-kind astronomy programs (such as one on the connection between astronomy and local cartography hero David Thompson) to its roster of world-class cuisine, accommodations, and daytime attractions.

The park will also offer a guide to "ultimate stargazing destinations" within the park, empowering visitors to take in the night sky from canyons, hot springs, mountaintops, and glaciers.

Test programming this past summer and fall has already drawn larger-than-average crowds for outdoor amphitheatre and interpretive centre talks.

While Jasper is nestled within soaring mountain ranges, it also has the largest clearings in the Rockies, making for dramatic open spaces for stargazing.

To qualify for the designation, Parks staff took readings at night from different campsites with specialized light meters to measure the darkness of the skies.

They discovered that the southern part of Jasper National Park not only boasted the darkest skies in Alberta, but some of the darkest anywhere near a major tourism centre.

Award-winning science journalist, author, and "wilderness astronomer" Peter McMahon has written/produced for Discovery Channel, CTVolympics.ca, The Toronto Star, Canadian Geographic, and the kids science publication YES Mag, among others. His next book – Space Tourism – will be published this fall by Kids Can Press.