Japan says fuel may have melted through 3 reactors 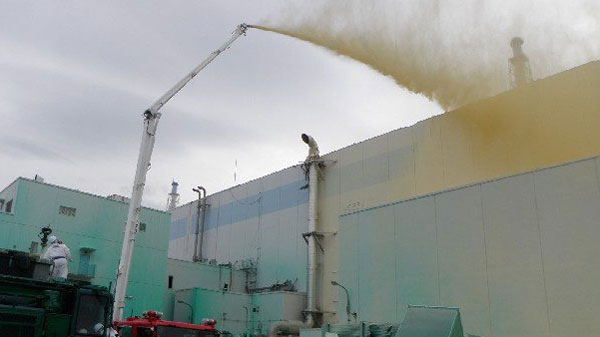 Japan admitted Tuesday that damage to the reactors at the Fukushima nuclear plant was worse than previously thought, as it conceded it was unprepared for the severity of the accident.

In a report being submitted to the International Atomic Energy Agency, the UN's nuclear agency, the Japanese government said the nuclear fuel in three reactors likely melted through the inner containment vessels, not just the core.

It said fuel may have burned through the reactor pressure vessels of Units 1, 2 and 3 and into their outer steel containment vessels.

The 750-page report also acknowledges design flaws in its reactors. Among the flaws was the location of spent fuel cooling pools high in the buildings. That resulted in leaks of radioactive water into lower levels, which hampered repair work.

Experts have said the delay in venting was a primary cause of explosions that further damaged the reactors and spewed huge amounts of radiation into the air.

The report also acknowledges the need for greater independence for the country's nuclear regulators.

"In light of the lessons learned from the accident, Japan has recognized that a fundamental revision of its nuclear safety preparedness and response is inevitable," the report said.

Japan also apologized to the international community in the report, expressing its "remorse that this accident has raised concerns around the world about the safety of nuclear power generation."

The document was released a day after Japan more than doubled its earlier estimate of total radiation that was released into the air in the first days of the disaster.

The new estimate is closer to that of Japan's independent Nuclear Safety Commission, which had initially estimated a release at 630,000 terabecquerels in the first month.

Although the amount is just 15 per cent of the total radiation released in the Chernobyl disaster in 1986, it suggests the contamination of the area around the plant is worse than first thought.

The Daiichi plant at Fukushima is still leaking radioactive material, nearly three months after an earthquake and tsunami knocked out the plant's cooling systems. But the government says it is still on track to bring the reactors to a cold shutdown by January.

More than 80,000 local residents living within a 20km radius of the plant were evacuated after the March disaster and still haven't returned to their homes.

With reports from Associated Press