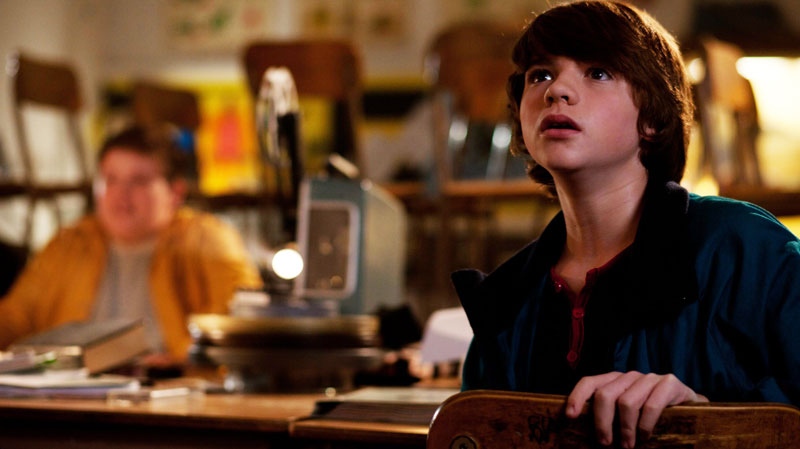 Last summer on school break, 14-year-old Joel Courtney travelled to Los Angeles to visit his older brother. The middle-school student from Moscow, Idaho had one dream to accomplish on his trip -- a goal that would push Courtney far away from his usual school classes in Latin, Logic and basketball.

He wanted to work in a commercial and leave L.A. with $100 in his pocket.

Courtney blew the lid off that aspiration when he landed the starring role in J.J. Abrams' sci-fi adventure, "Super 8."

On the advice of an acting coach, Courtney went to a casting call for Abrams' top-secret venture.

Eleven callbacks later, Courtney got the part that has changed his life forever.

"J.J. took a huge risk hiring me," said Courtney. "I had no experience. I was totally unknown. But J.J. saw something in me. I'm glad that he did," he said.

That "something" that Abrams spotted was a potent blend of heart, guts and innocence -- a combination that harkens back to iconic characters like the young boy, Elliott, in Steven Spielberg's 1982 classic, "E.T."

Set in 1979 in the working-class town of Lillian, Ohio, "Super 8's" hero, Joel Lamb (Courtney), stands at a pivotal time of change. His mother, a steel-mill worker, has just died in an accident. His father, a local deputy, is too caught up in his grief and his job to be a good parent to his adolescent son.

Joel's only comfort comes when he and his pals make a Zombie movie on a Super 8 camera.

Joel leaps at the chance to become the film's makeup man. The job gives him close access to the flick's leading lady and his first big crush, Alice (Fanning).

One day while shooting, the fledgling filmmakers witness a terrible train wreck. Shortly after, people start vanishing across town. Then a mysterious creature wreaks havoc.

"I think what was really important to J.J. was that all of us kids be open and honest up on screen," said Courtney.

"The first time I saw the movie, all us kids were together for it. It was amazing," he said.

The only moment that was tough for Courtney to watch was one scene involving a big blowup with his screen father, Kyle Chandler.

"I would never yell at my dad in real life. Not ever. Doing that scene was so hard for me," he said.

Courtney won't reveal any of "Super 8's" secrets, which have been guarded with utmost secrecy since the project's inception.

"I haven't even told my friends," Courtney said, with a laugh.

He will say this: "Kids are kids. That never changes."

Right from the get-go, what Courtney loved most about "Super 8" was its story of young friendships.

"We've been all over the world promoting this movie. Everywhere we went, audiences got the heart of this story. That heart is all about friendship," he said.

Looking ahead, Courtney isn't sure what his next film role will be.

The actor will stay in Los Angeles for the summer to audition for parts before returning to school in the fall.

"Steven told me to stay in school and always keep a good group of friends around me. Without that you can't stay grounded," said Courtney.

The Hollywood newcomer has also learned some valuable lessons watching the career of his hero, Tom Hanks.

"He's played his cards so well with his career. That's the kind of career I'd like to have one day."